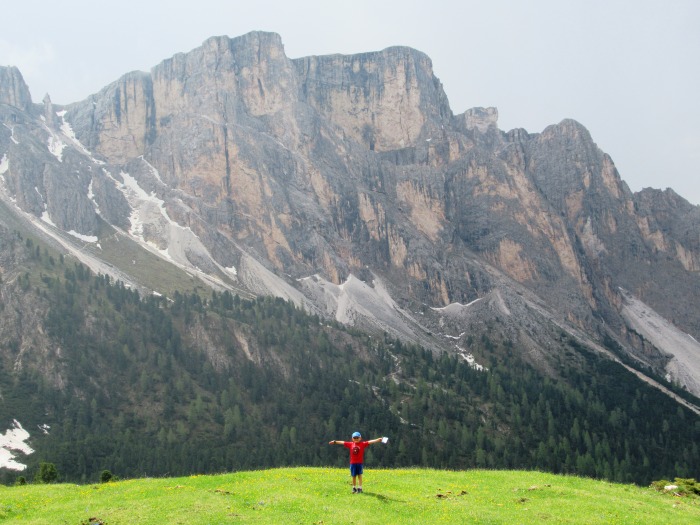 Hiking the alpine meadows below the Odle Group.

The Dolomites are a jagged range of mountains in North-Eastern Italy, immediately south of the Austrian border. The range is composed of a form of limestone called dolomite (also found throughout Wyoming, at crags like Sinks Canyon and Wild Iris). The rock is heavily featured, and at times heavily fractured, providing unusual challenges for climbers and incredibly dramatic landscapes for sightseers.

To climbers, the Dolomites are renowned for their long, dramatic alpine rock routes. The range is home to countless long classics, including one of the six “Great North Faces of the Alps” (the Comici Route on the north face of the Cima Grande). Reinhold Messner maintains they are the most beautiful mountains in the world—“each mountain in the range is like a piece of art.” After spending a couple weeks there with my family last month, it’s hard to disagree. 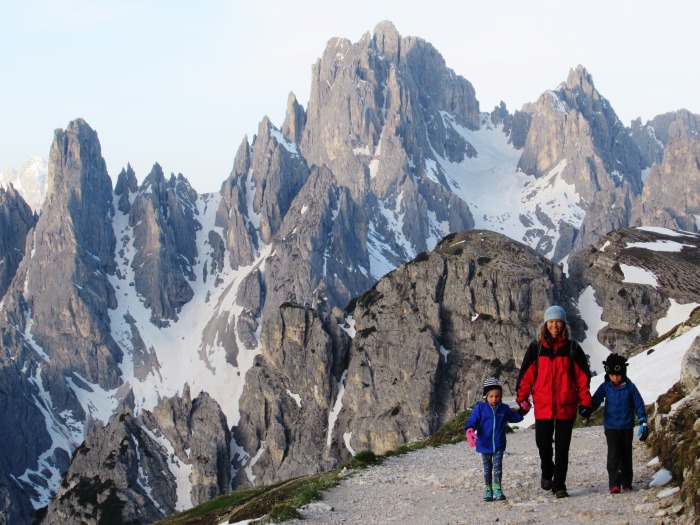 On the trail to the Tre Cime, with the Cadini di Misurina group behind.

There are so many ways to enjoy these mountains, its hard to know where to start. We wanted to do some sport climbing, some via ferrate (more on these subjects in the coming weeks), but mostly we wanted to explore the incredible and complex landscape. 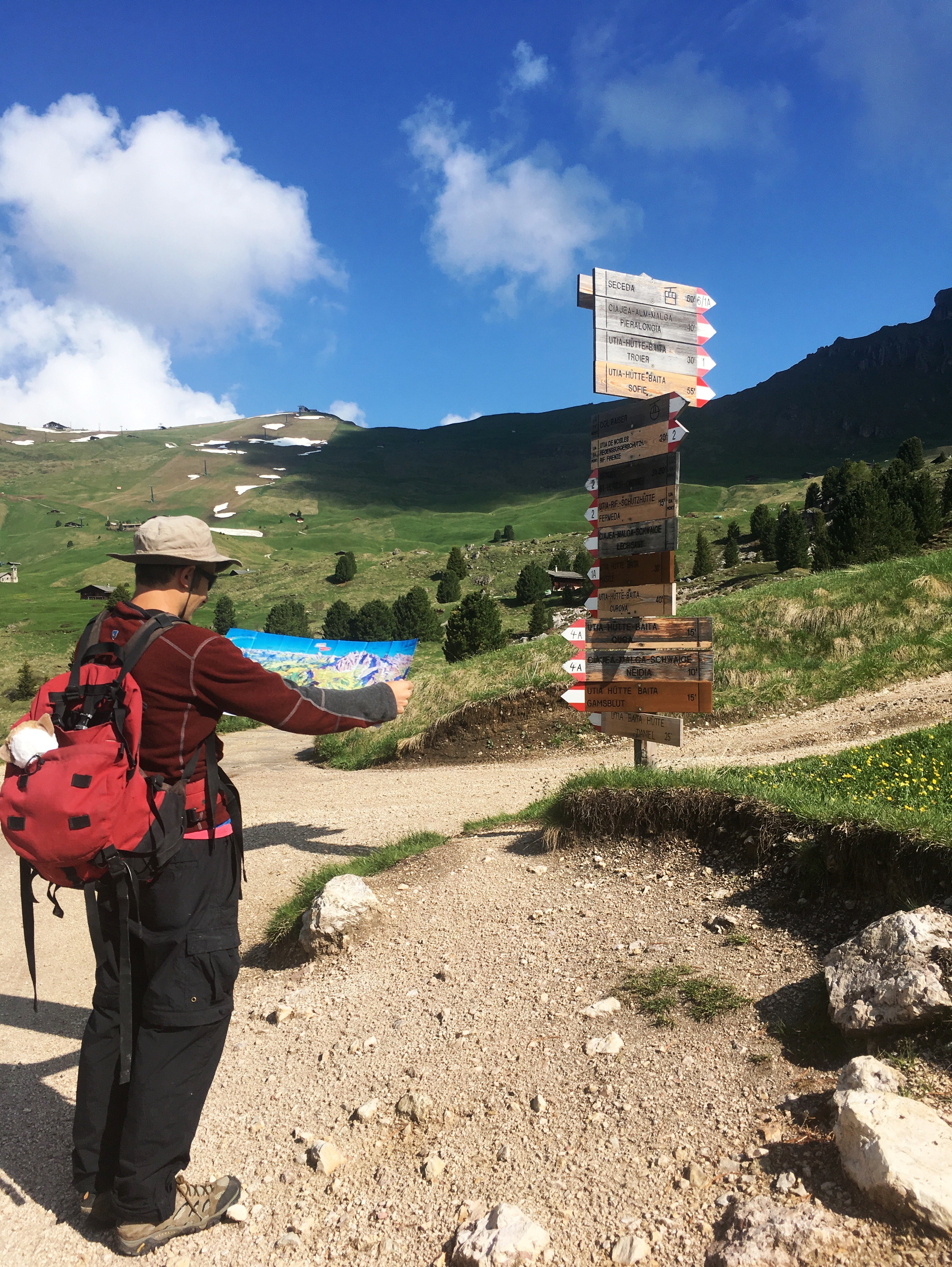 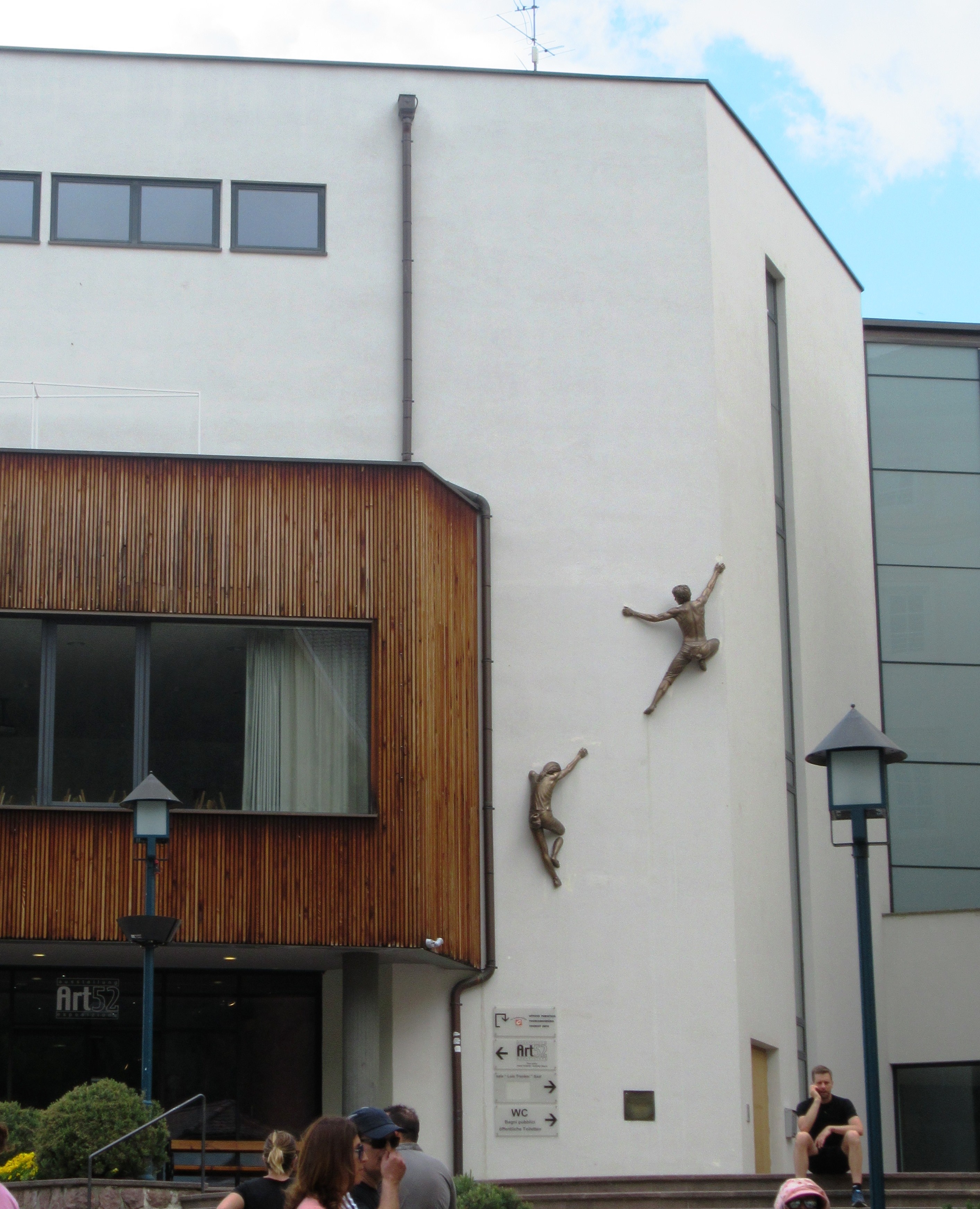 For basecamp we chose the vibrant village of Cortina D’Ampezzo. This is a quintessential ski town complete with designer fashions and exorbitant prices (though to be fair, it’s not as bad as Aspen!) It even hosted the Winter Olympics in 1956. It’s got all the essentials (except a pool) and is ideally centered between several legendary climbing attractions. 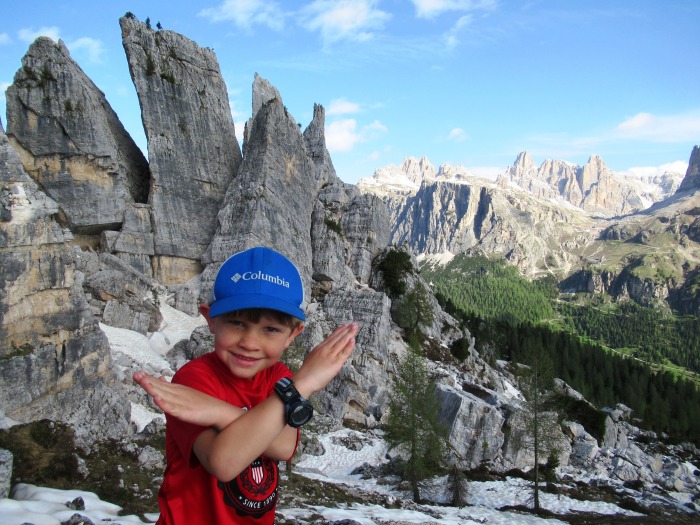 Exploring the Cinque Torri, a historic climbing crag. The Col dei Bos can be seen in the distance. 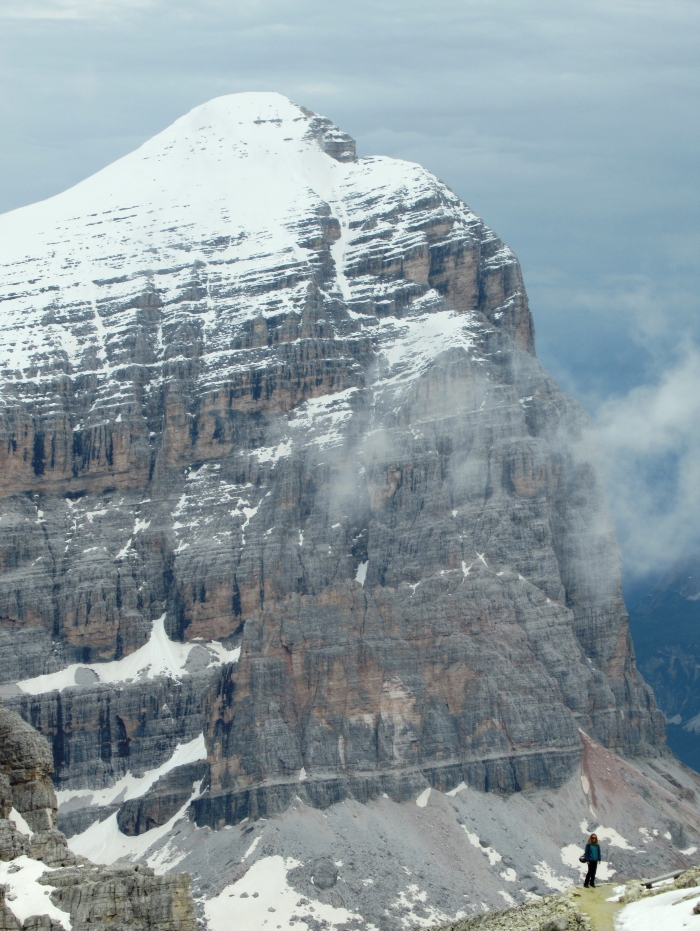 Kate near the summit of Lagazuoi Piccolo, with Tofana di Rozes behind.

The weather in the Dolomites is incredibly consistent—it rains every day! However, in our experience the mornings were dependably awesome, usually bluebird, with clouds beginning to form around mid-day, culminating in relatively brief-but-violent thunderstorms. We never lost a day to weather, though we did postpone an activity when we awoke to threatening clouds. A typical day for us began with a dawn start, 5-7 hours of some climbing, via ferrata or hiking adventure, followed by a few hours siesta while the rain passed, then another short hike, etc and a visit to town for well-deserved gelato. 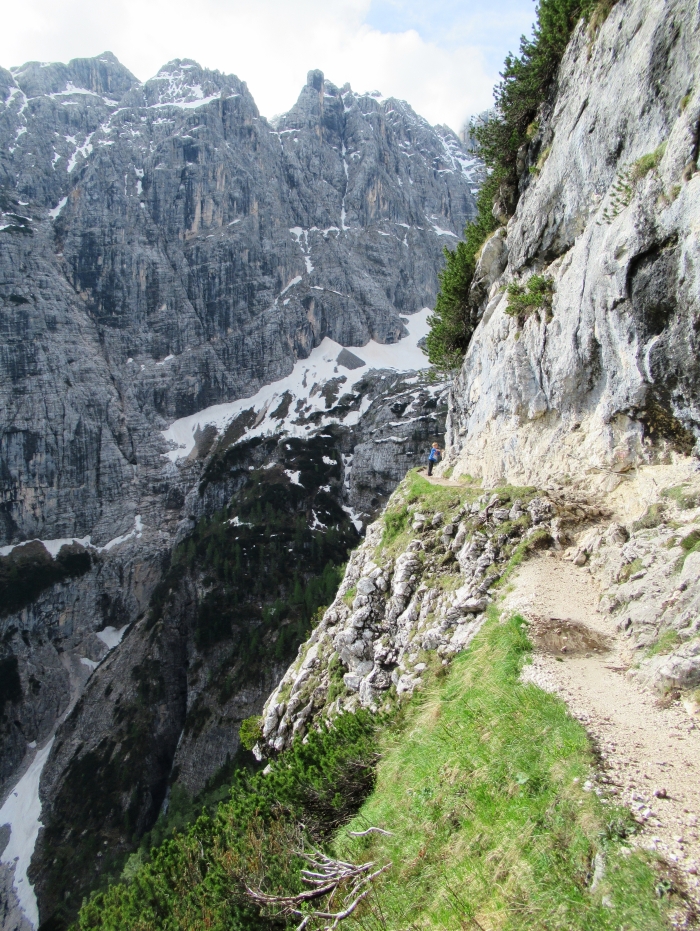 Logan on the exposed trail to the Sorapiss Group. 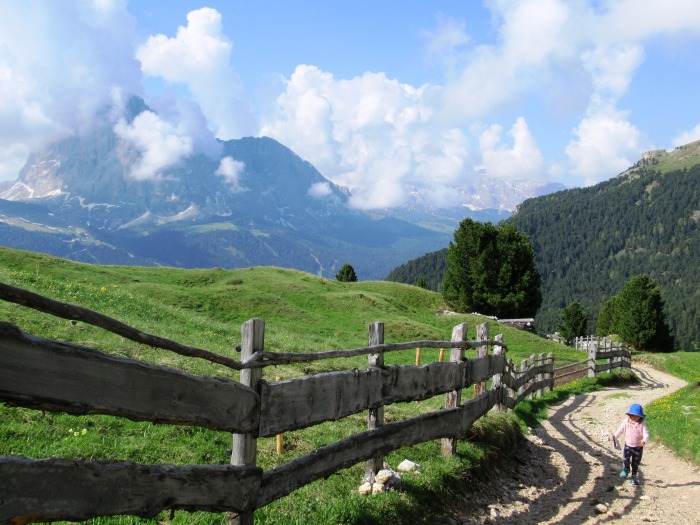 Amelie in the Odle Group, with Sassolungo obscured by clouds.

A well-maintained network of roads and cable cars makes it easy to explore, even with small kids (though the cable cars can be pricey). We were there in early season, so many lifts were not operating, and many via ferrate were impassable, but we found plenty to do for two weeks and grew to appreciate the relative solitude once the first wave of summer crowds arrived on the last weekend of our trip. 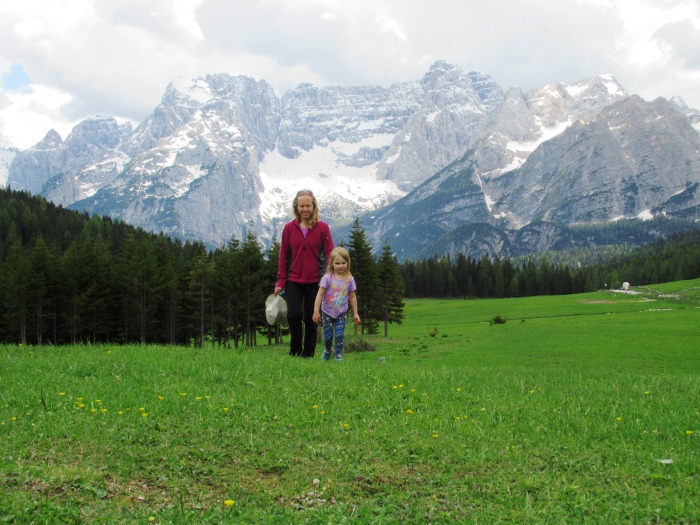 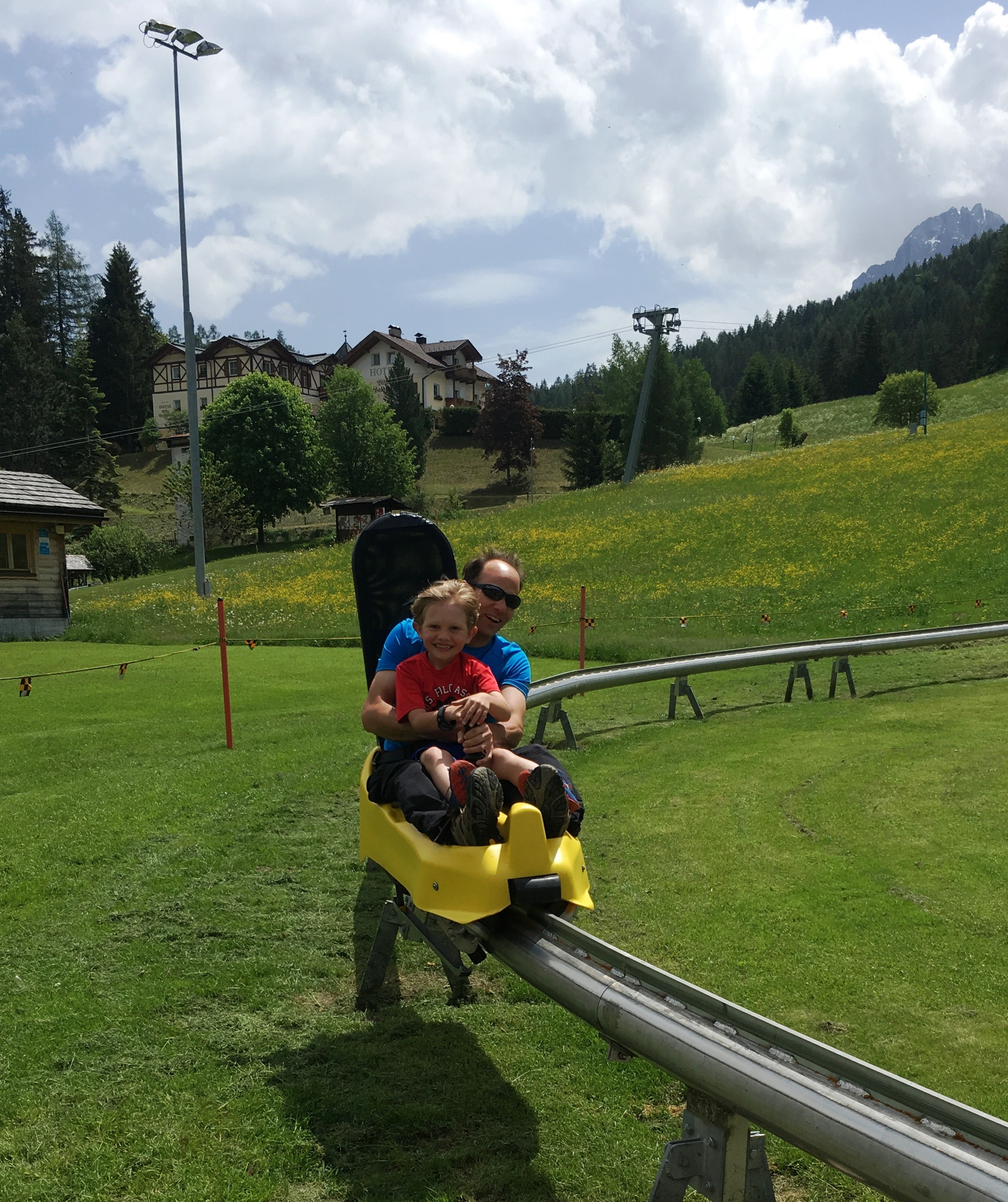 The Haunold “Funbob.” No relation to Alex?

The kids did a great job of putting up with our insatiable desire to hike and climb. It was the most fun we’ve ever had on a vacation, but also the most exhausted we’ve been at the end. There always seemed to be one more hike, one more mountain pass, one more lake worth visiting. The only thing we failed to find was a good time to rest. Despite that, it feels like we barely scratched the surface of this marvelous place. I’m eager to go back once the kids are big enough to share a rope with me up one of the many towering alpine walls. 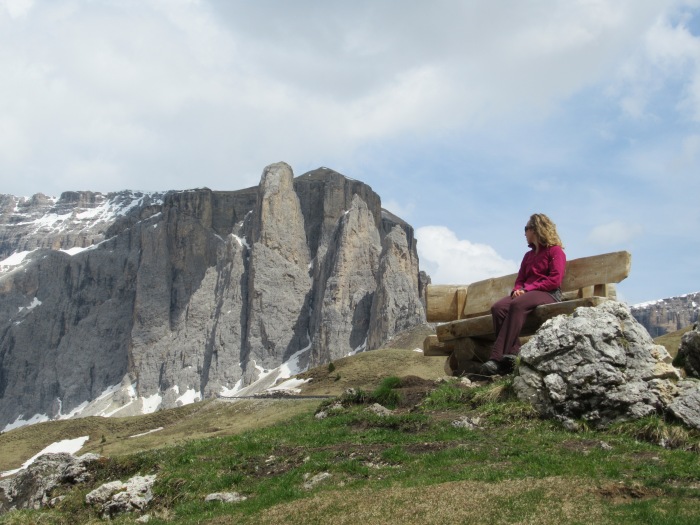 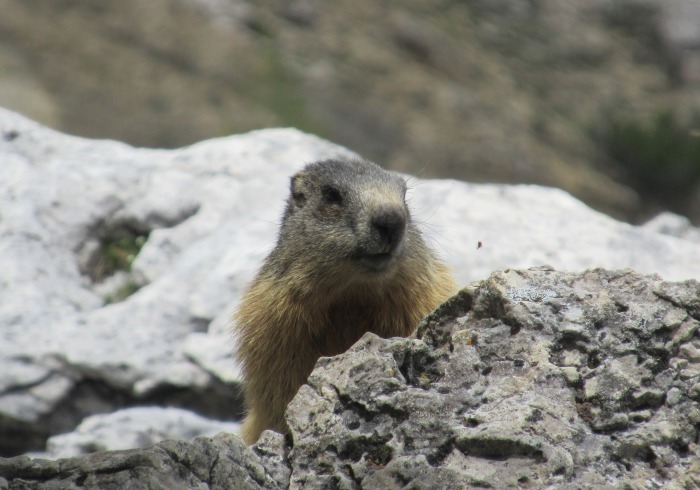 3 thoughts on “Exploring the Dolomites”