Lesson 2: (Almost) Anyone Can Become an Expert Climber

When we ended Lesson 1, we were pondering the main theme of Anders Ericsson’s excellent new book Peak: 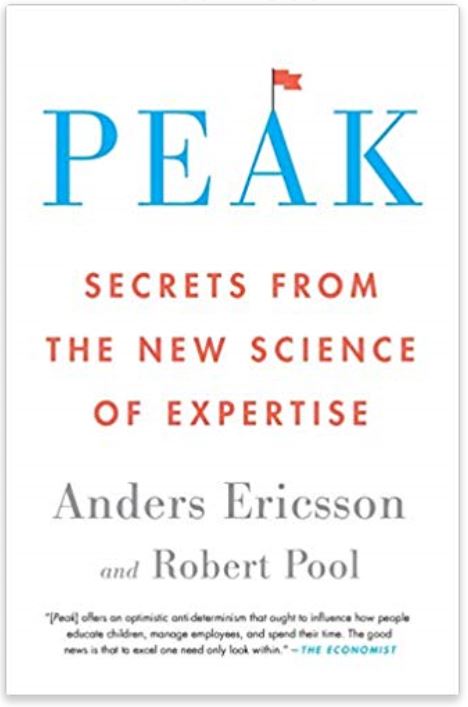 Ericsson makes the argument that natural talent, potential, genetic advantages, etc, are largely a figment of our imagination, and should never be seen as an excuse or discouragement in striving to reach ones goals. He reinforces this notion with multiple entertaining anecdotes of alleged savants, which he then attempts to debunk. He drives the point home with even more anecdotes of Nobel Prize Winners, master musicians, and champions of various contests who worked incredibly hard, making painstakingly slow progress, before achieving their triumphs, showing that much of the time, success that might appear to stem from “talent” is in reality the result of enormous amounts of hard work.

I agree wholeheartedly with Ericsson’s practical point—you shouldn’t let your genetics or perceived lack of talent stop you from pursuing something you love. If you love Scrabble, you should do everything in your power to become the best Scrabble player you can be. You may well have what it takes to become World Scrabble Champion. If you love rock climbing, you should pursuit it with all your heart—but I seriously doubt any more than a tiny fraction of us have what it takes to become a climbing world champion.

Herein lies the major conundrum of Peak from the perspective of the performance-oriented rock climber. Ericsson has spent his lifetime studying experts, and his book is filled with inspiring tales, but almost all of these are in fields that are primarily, if not entirely, skill-based. Peak makes a compelling case that genes and “talent” have little, if any, impact on skill-based activities. However, performance rock climbing is very much an athletic endeavor, and it is very much influenced by tangible, physical characteristics. It is more than a skill to be learned, like chess or digit memorization. [Note, that is not at all to say climbers cannot benefit from Ericsson’s impressive knowledge—we absolutely can, which we will discuss shortly.]

Genetics do play a role in athletics. Ericsson points this out a couple times, stating, “the only two areas where we know for certain that genetics affects sports performance are height and body size.” (p. 218) While Ericsson seems inclined to minimize this fact, I would argue that body size is significant to virtually every sport. We know forearm length is pivotal in how fast a pitcher can hurl a baseball; we know ankle diameter, leg length, and hip width are crucial to “Running Economy” in distance runners, and we know Strength-to-Weight Ratio is a critical factor in climbing (and it is inversely proportional to body size).

Furthermore, simply because we only know a single fact for certain, does not mean that no other facts exist, waiting to be discovered. It just means we don’t know for sure (yet). There is a great deal we still do not know about how genes interact and influence physical traits. Surely there are other genetic factors that impact sports performance (including rock climbing performance), such as muscle fiber twitch, even if they are yet to be proven, for certain.

Now that we’ve acknowledged there are indeed some genetic factors influencing athletic potential, can you still become an expert (in whatever endeavor in which you have the genetic potential to be an expert) at any age? Ericsson also concedes that certain physical abilities must be developed while young, before bones fully calcify, specifically citing throwing range-of-motion in pitchers, and hip turn-out in ballet dancers (p.196). Surely there are other abilities, not yet identified, that must be developed while young. Even if there aren’t, I know plenty of adult climbers who lament their poor hip turn out!

Does this mean you can’t reach Expert Level if you start late? Ericsson’s research suggests your brain can acquire new, complex skills at any age. Whether your body will be able to execute those skills at an “Expert Level” depends, it would seem, on the activity in question. The more physically-demanding, the harder it will be; the more well-developed the activity, the harder it will be. Certainly a late start is not ideal, but theoretically someone with next-level training methods and sufficient determination could overcome a late start, especially since we are so far from reaching human limits in most fields….

Are There Truly No Limits?

Obviously there are limits. If there were no limits, humans would have the theoretical ability to run a 100m dash faster than light speed. However, this is where Peak is the most convincing. Time and again humans have shattered boundaries that were previously viewed as absolute limits by discovering new practice methods and greater determination. While humanity will never run at light speed, our notions of what are “expert” or even “impossible” are likely wildly wrong. Remember, just a few decades ago experts assumed the human limit for random-digit memorization was around 20, yet now we know it’s over 200. So we were off by a factor of 10!

Therefore, considering what we know about genetics, aging, and human limitations, within the context of athletics, perhaps it would be better to phrase Peak’s theme thusly:

Limits are so distant and unknowable as to be virtually irrelevant; a late start can be overcome through superior training; You can be almost anything you want to be (with the right kind of practice)

Now that we have a general idea how Peak applies to athletics at large, to what extent do Ericsson’s findings apply to performance-oriented climbers? What are the Performance-Oriented Climber’s key takeaways from Peak? We will delve into that in Lesson 3….