While I really enjoyed the world-class routes at Lehn and Gimmelwald, I place great value in going to new places. On these whirlwind trips to Europe I try to cover as much ground as possible, so I see virtue in going to a crag I haven’t seen before, even if my research suggests the new place may not be quite as good as the old. 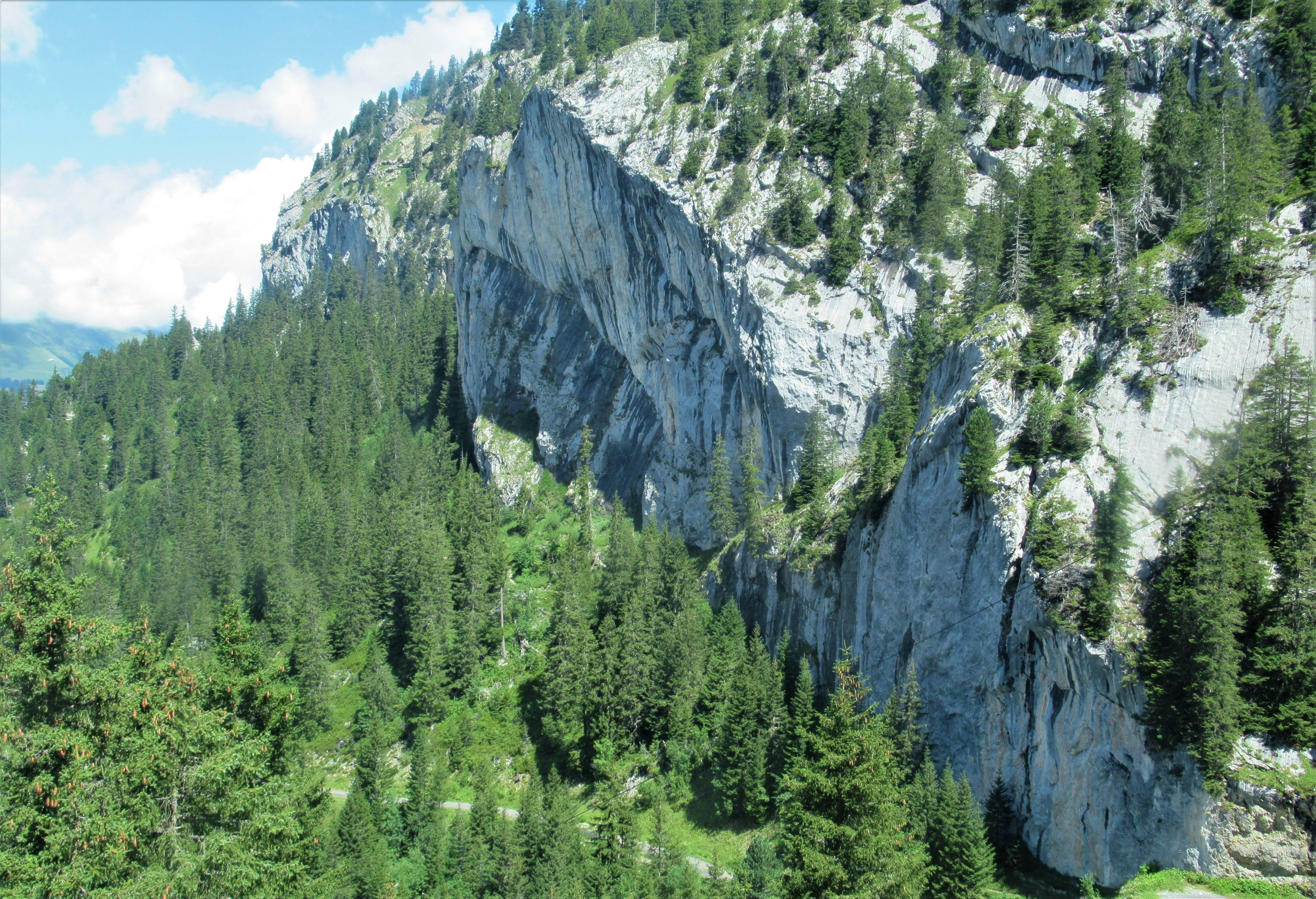 With that in mind, I decided to forego a second day at Gimmelwald in favor of another limestone crag I’d just recently heard about called Elsigen. This west-facing cliffband is about an hour’s drive from Lauterbrunnen, and accessed by a short cable car ride. The rock is super high-quality limestone, mostly of the gray sticky & sometimes prickly variety. Although about half the routes were wet, there was still plenty to occupy us for a day, including (mercifully) some great warmups. 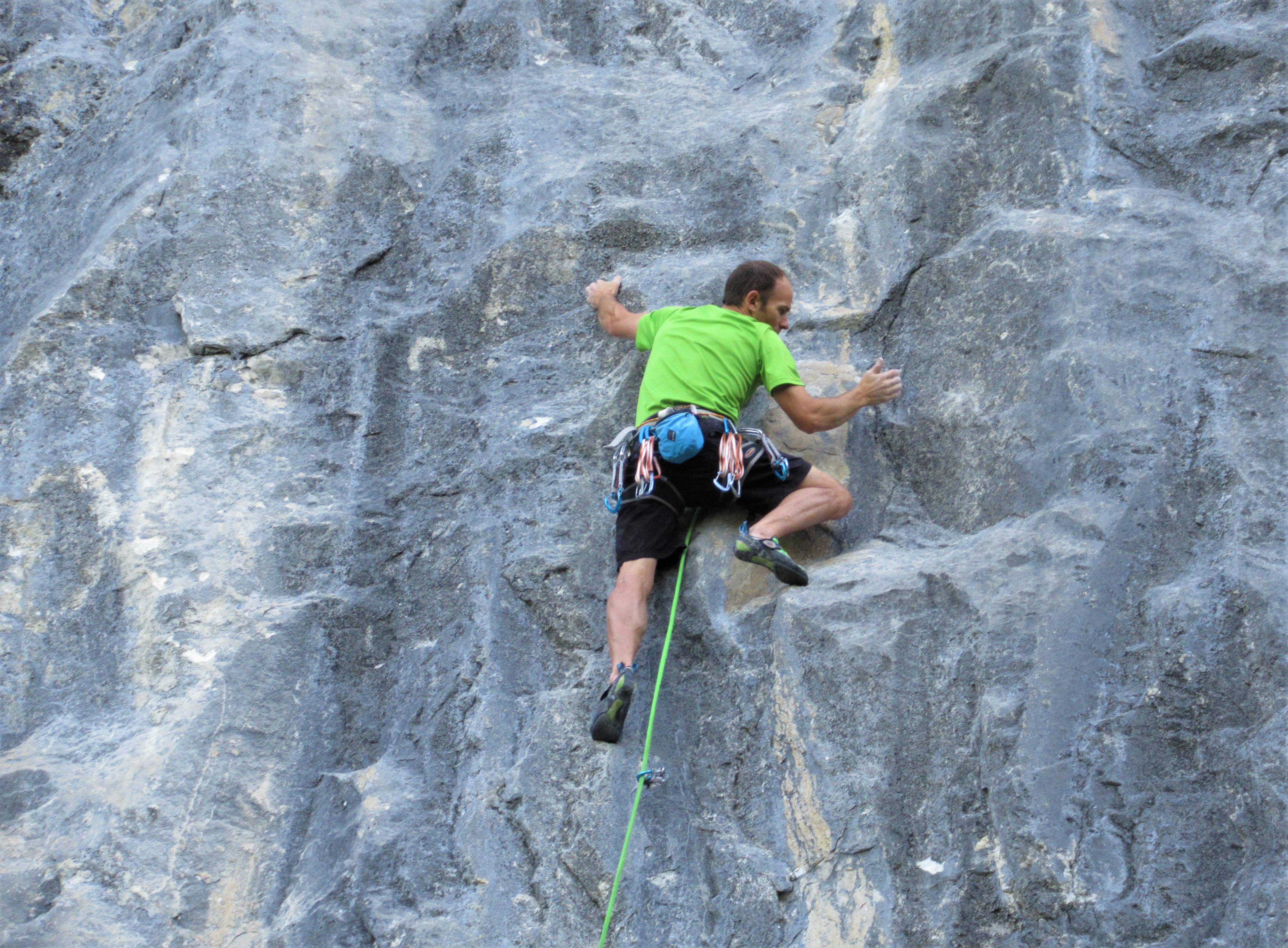 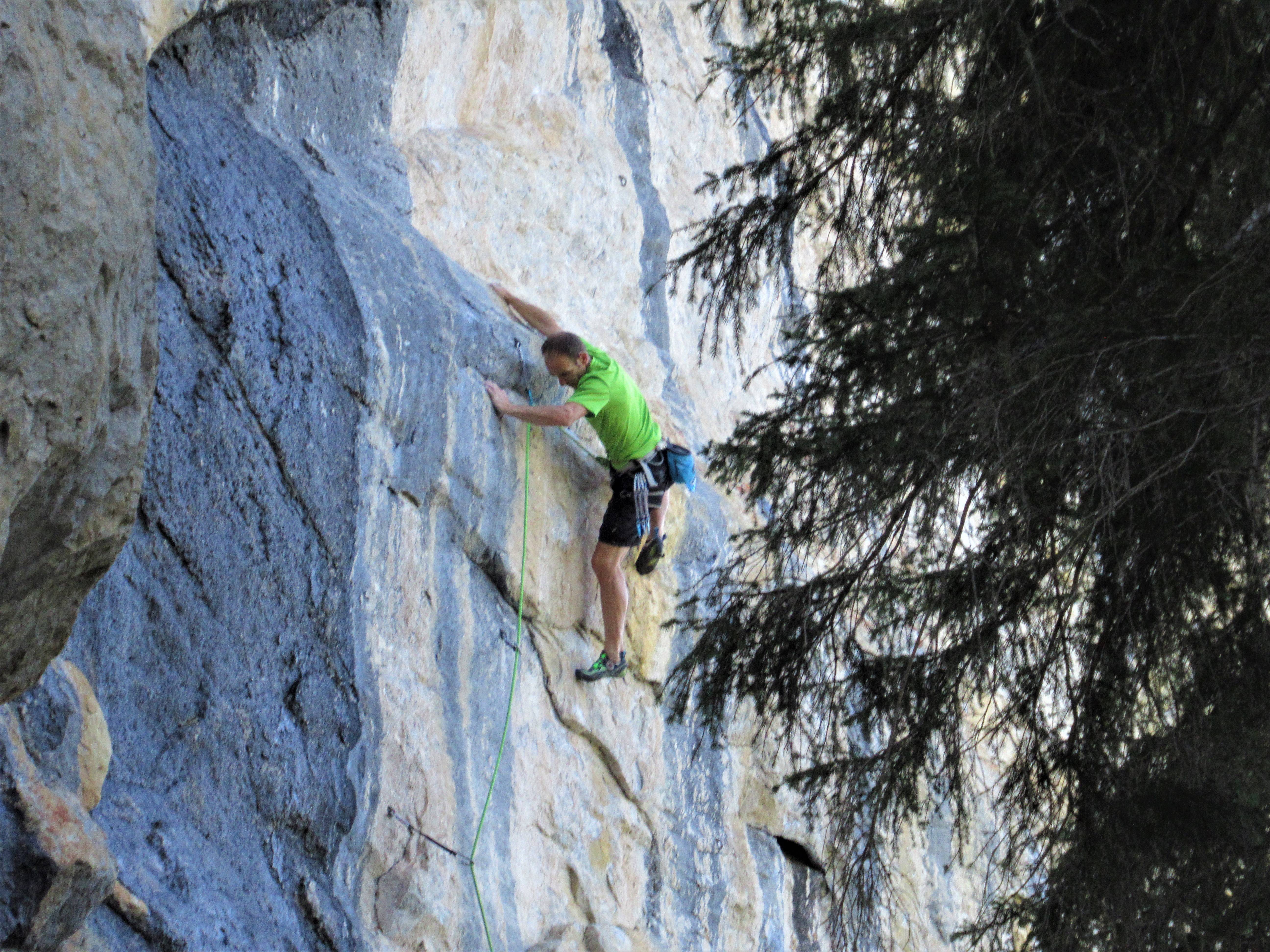 Every route I climbed was excellent. The climbing is generally just over vertical, with fairly intense cruxes but enough continuity to keep the pump going all the way to the chains. My favorite routes were the towering 7a+ (12a) Zweierlei, which climbs impeccable gray Verdon-quality stone, the classic Prisma (7b+/12c) with its burly undercling crux, and a super crimpy, in-your-face 7c+ (13a) called Panther in a Cage. 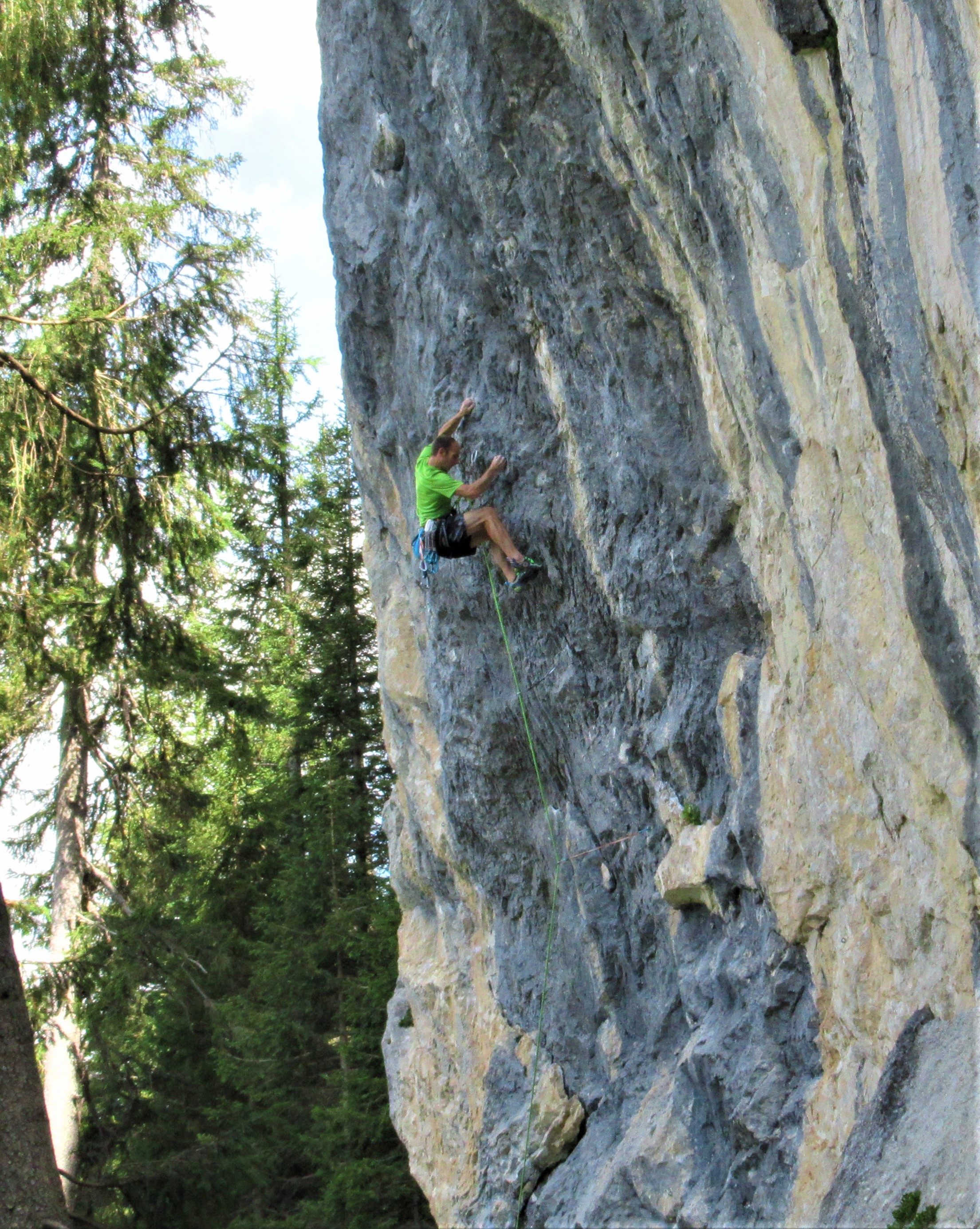 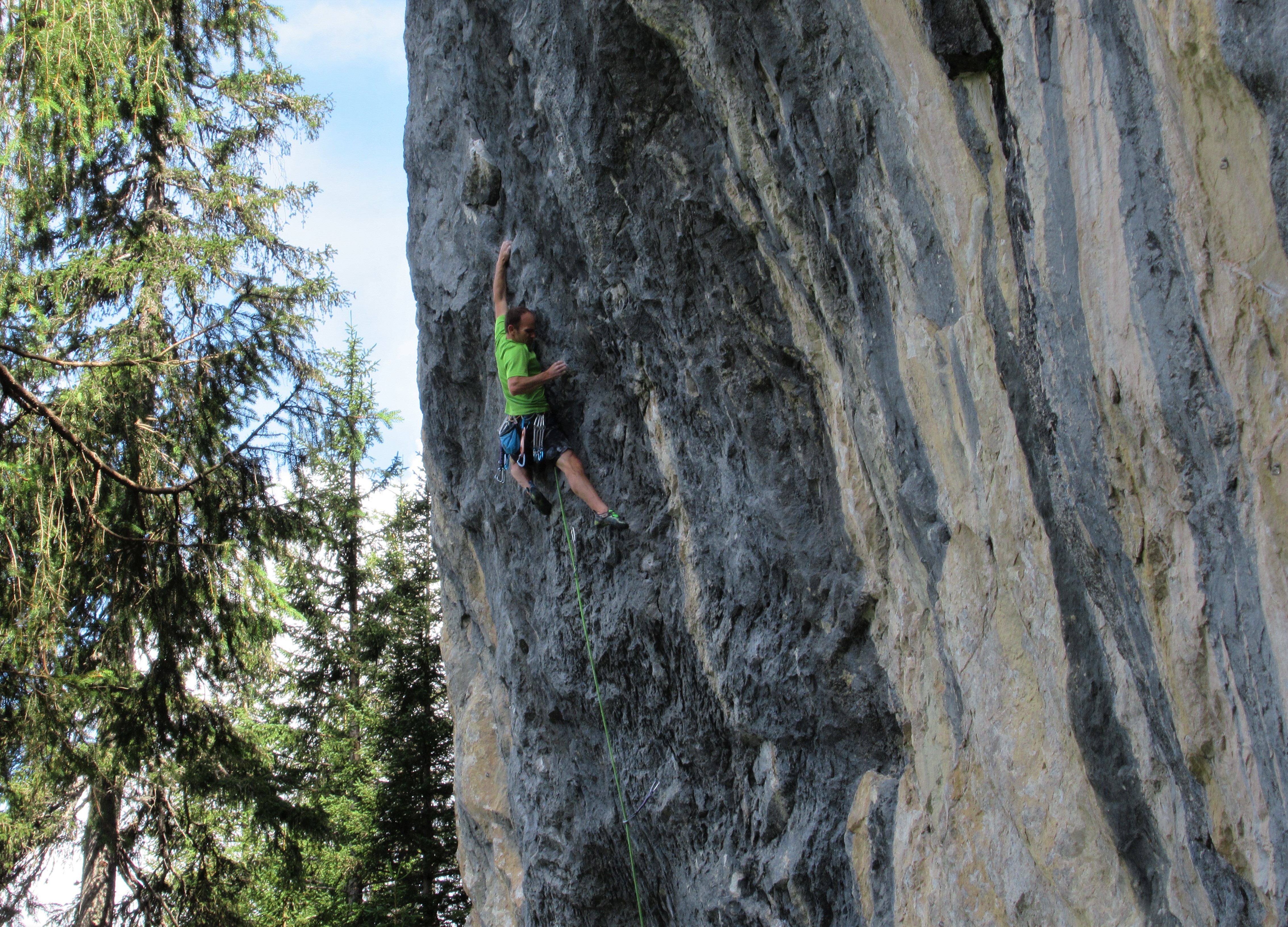 The views at Elsigen were spectacular, although to be fair, every single crag we visited on the trip had spectacular views—that’s just the nature of Switzerland. Although not quite as spectacular as Gimmelwald, for the typical travelling climber Elsigen is probably a much better destination for limestone cragging simply due to the greater variety of grades. It was certainly more popular than either Gimmelwald or Lehn (which was not really “in-season” during our early August visit).

After climbing at Elsigen, we popped over to the next valley east to check out the incredible Oescheninsee.

Before we knew it our short week in the Lauterbrunnen Valley was up, and it was time to head south for the jet setting village of Zermatt. Another “car-free” village, Zermatt is the typical jumping-off point for the Matterhorn, and it swarms with camera-toting tourists hoping to get a cloud-free shot of the iconic peak. 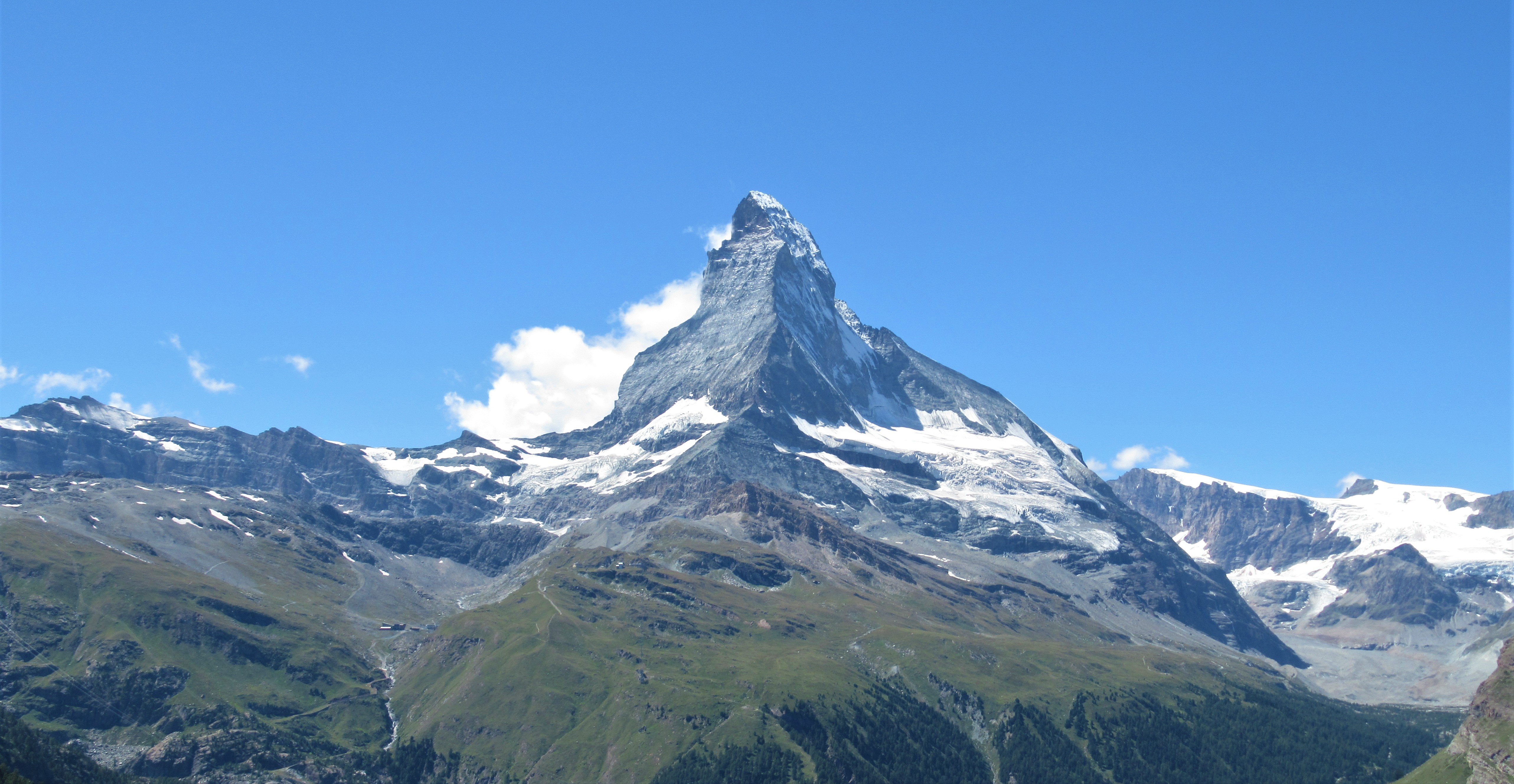 The Matterhorn from the “5-Seen Weg” hike. 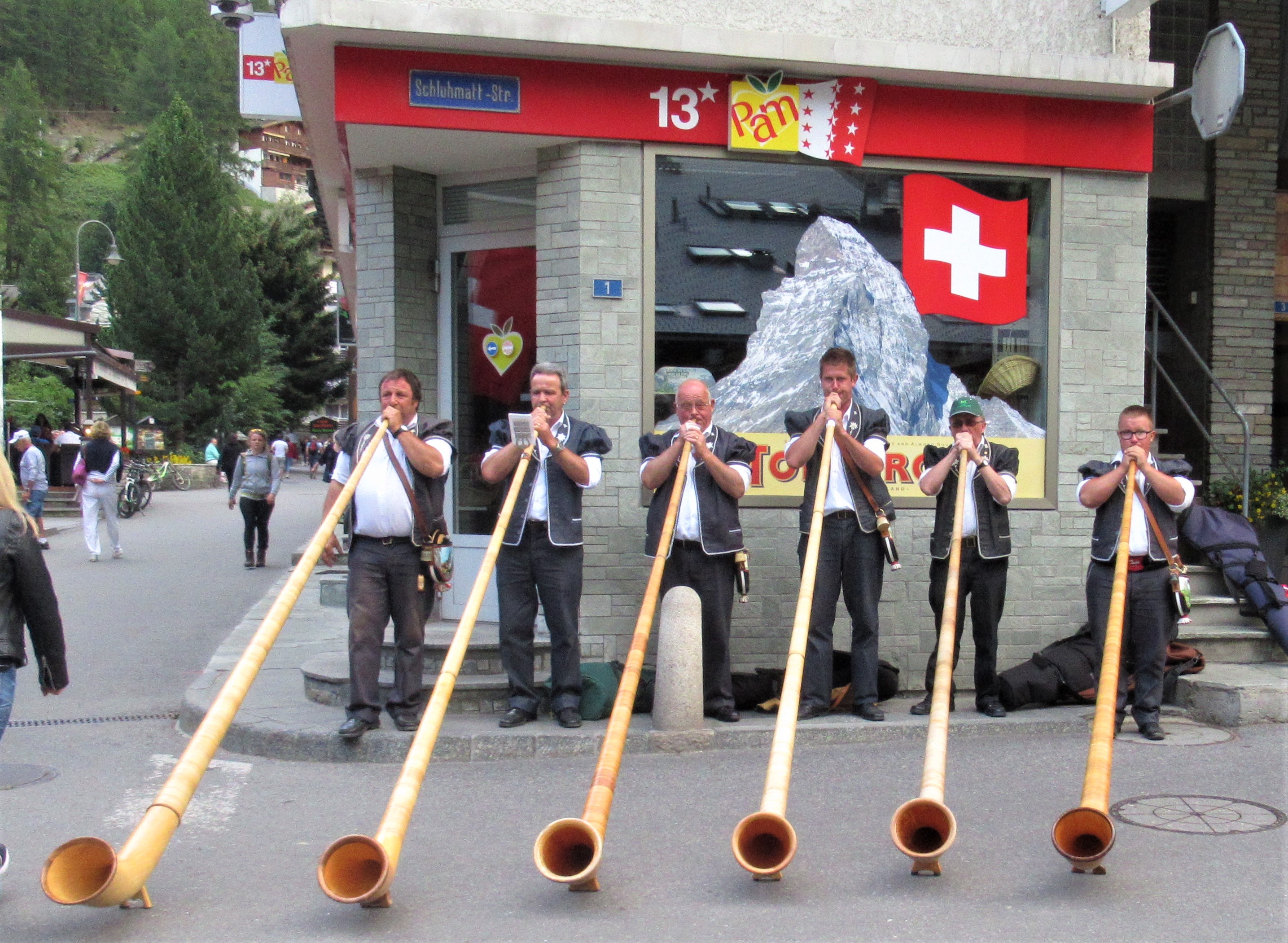 Like everyone else, we were also here to see and hike around the mountain. Zermatt is not known for its sport climbing, nor can I recommend it. It’s an uber-ritzy ski-town, like Aspen or Vail on steroids. It’s not exactly climber-friendly or family-friendly, but this was my first time in Switzerland and I really wanted to see the Matterhorn. In hindsight, I would have preferred to wait for a promising forecast and then just make a day trip to Zermatt to get a quick look at the mountain and then spend our time somewhere a little less spoiled. 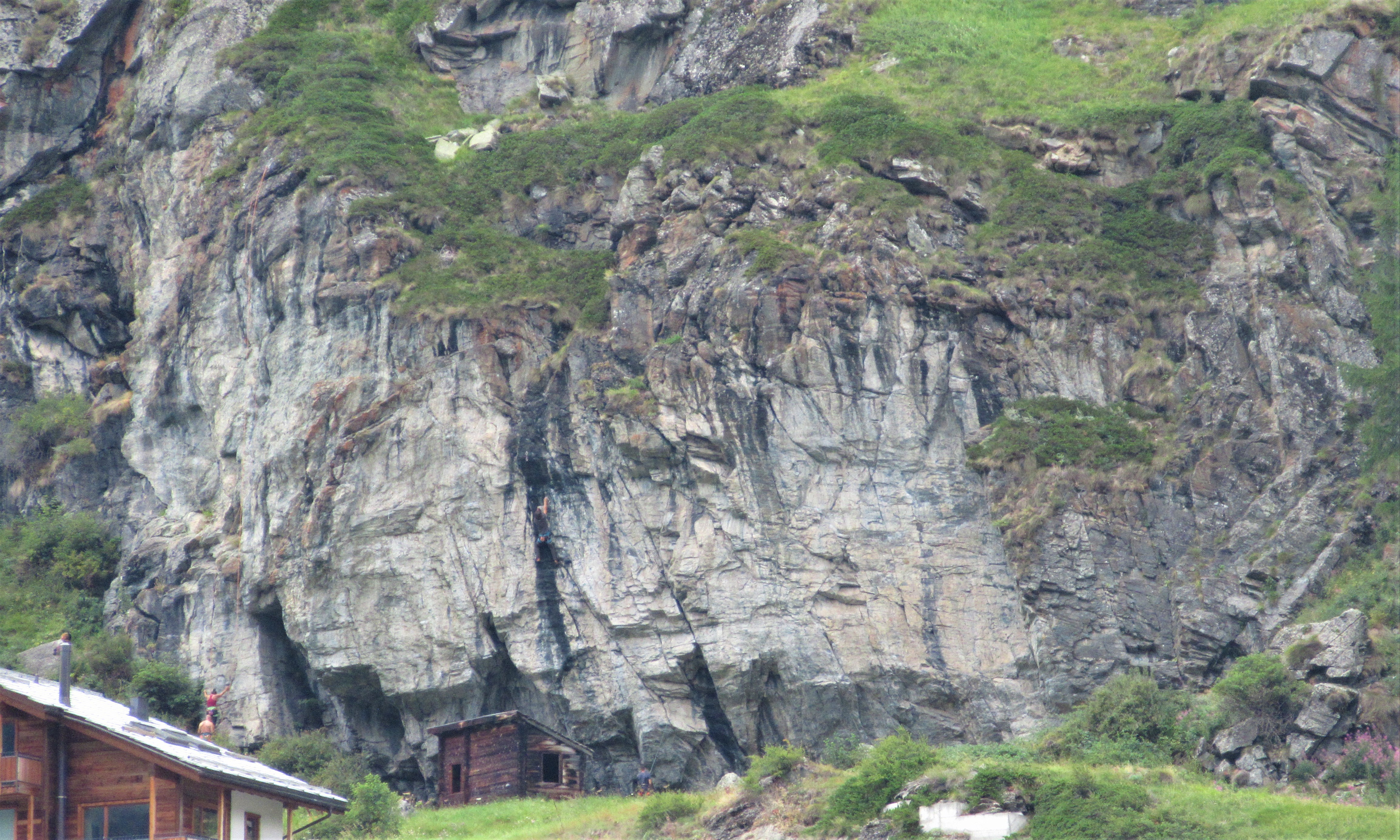 Eschelbalmen from Zermatt. There is a climber in red on the lower left, and another in a dark shirt climbing the central black streak.

Fortunately there is a sport crag right above town—like, right above town—you could jump onto the nearest chalet’s roof from the crag base. This small cliff, called Eschelbalmen, is comprised of some pretty mank metamorphic stone covered in a very thin coating of calcified flowstone that sortof holds everything together. It’s not a destination crag, but its passable for a desperate OCD climber who is paranoid about falling out of shape over a 3-day break. 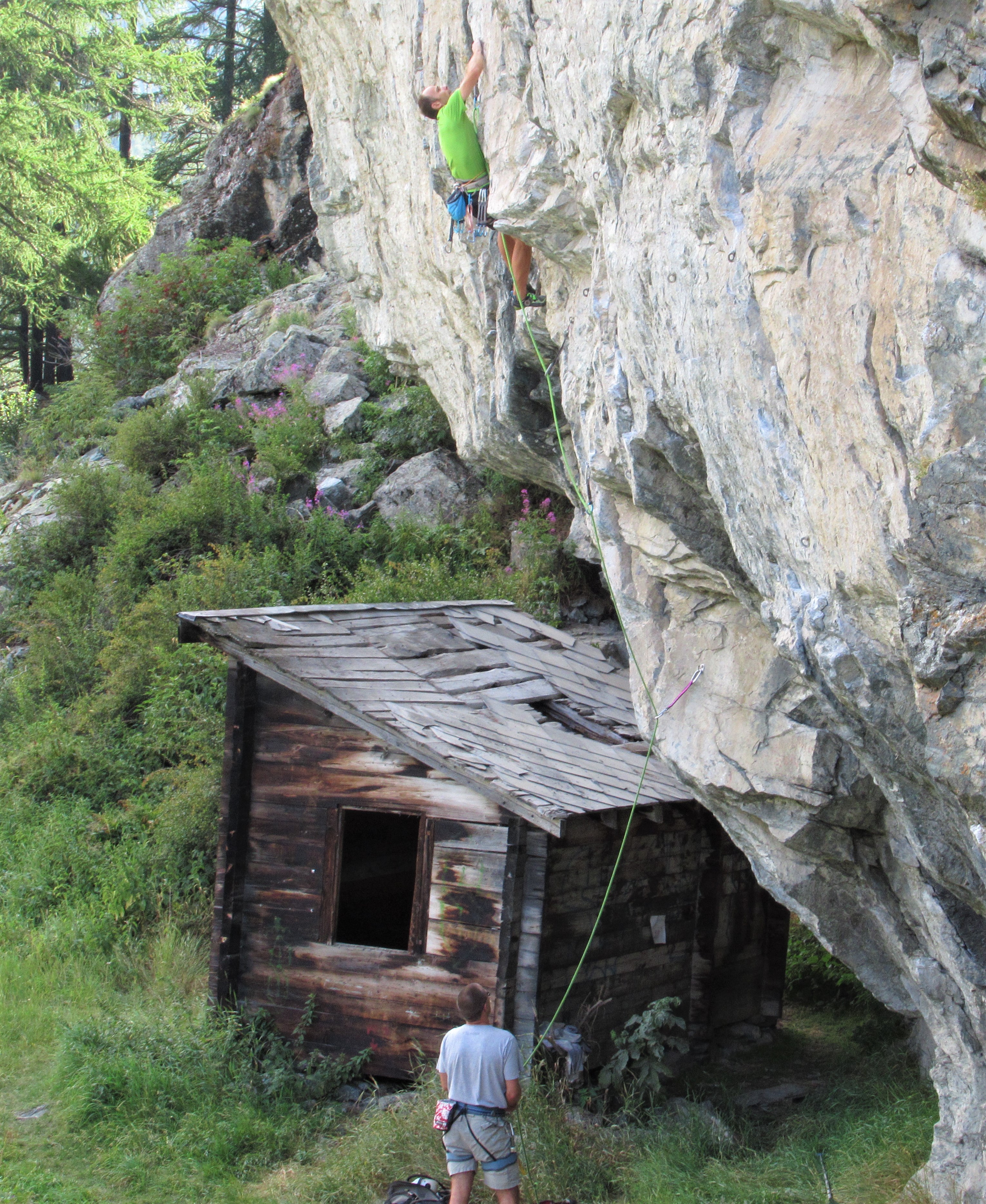 Warming up on Butchered at the Bitch, 7b, Eschalbalmen.

Like all Swiss crags, it has amazing views, but the best thing going for it was a really chill, relaxing vibe. The base is a beautiful grassy meadow, and you can even pick raspberries between burns. I’m not going to waste too many electrons recommending it because its not worth that, but suffice to say, if you are in a pinch, its better than nothing (or bouldering, haha).

Fun with Pano mode. This is the Monte Rosa massif, just south of the Matterhorn, which is quite a bit more interesting in my opinion. 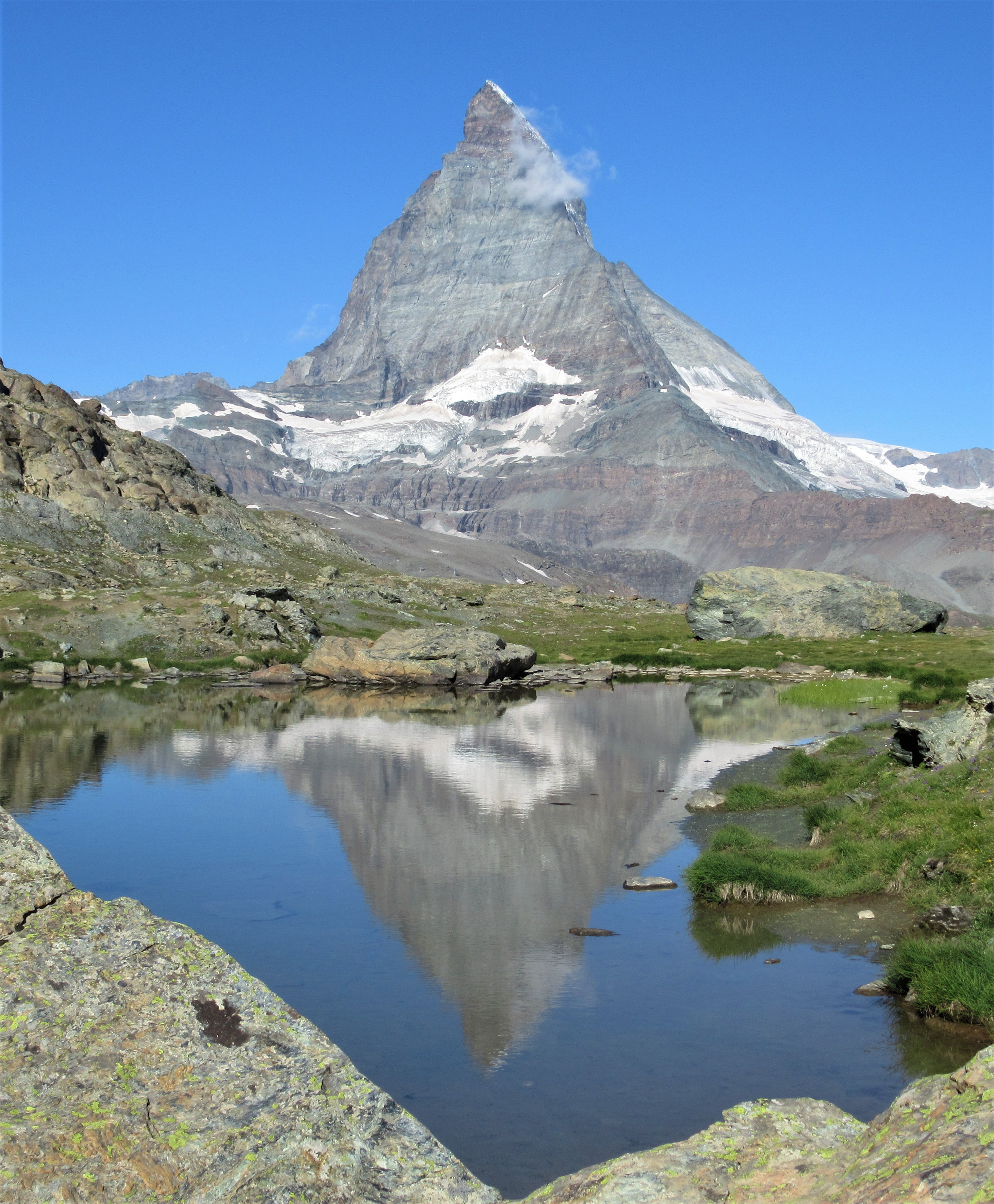 Obligatory reflection pic, this one of the tiny ponds around Riffelsee.

We put in a pretty quick session here after a long day of hiking around the northeast flank of the Matterhorn, including a quick dash up to the Hornli Hut at the base of the iconic Hornli Ridge of the Matterhorn. The shortness of the routes meant it was easy to pack a lot of burns into a short period of time. The highlight of the day was a 7c (5.12d) I did called Victoria, which apparently starts by scaling the roof of the small hut at the base of the cliff. I made a good effort on the 8a (13b) THC, but came off when I failed to spot a mungy roof pocket at the end of the crux. 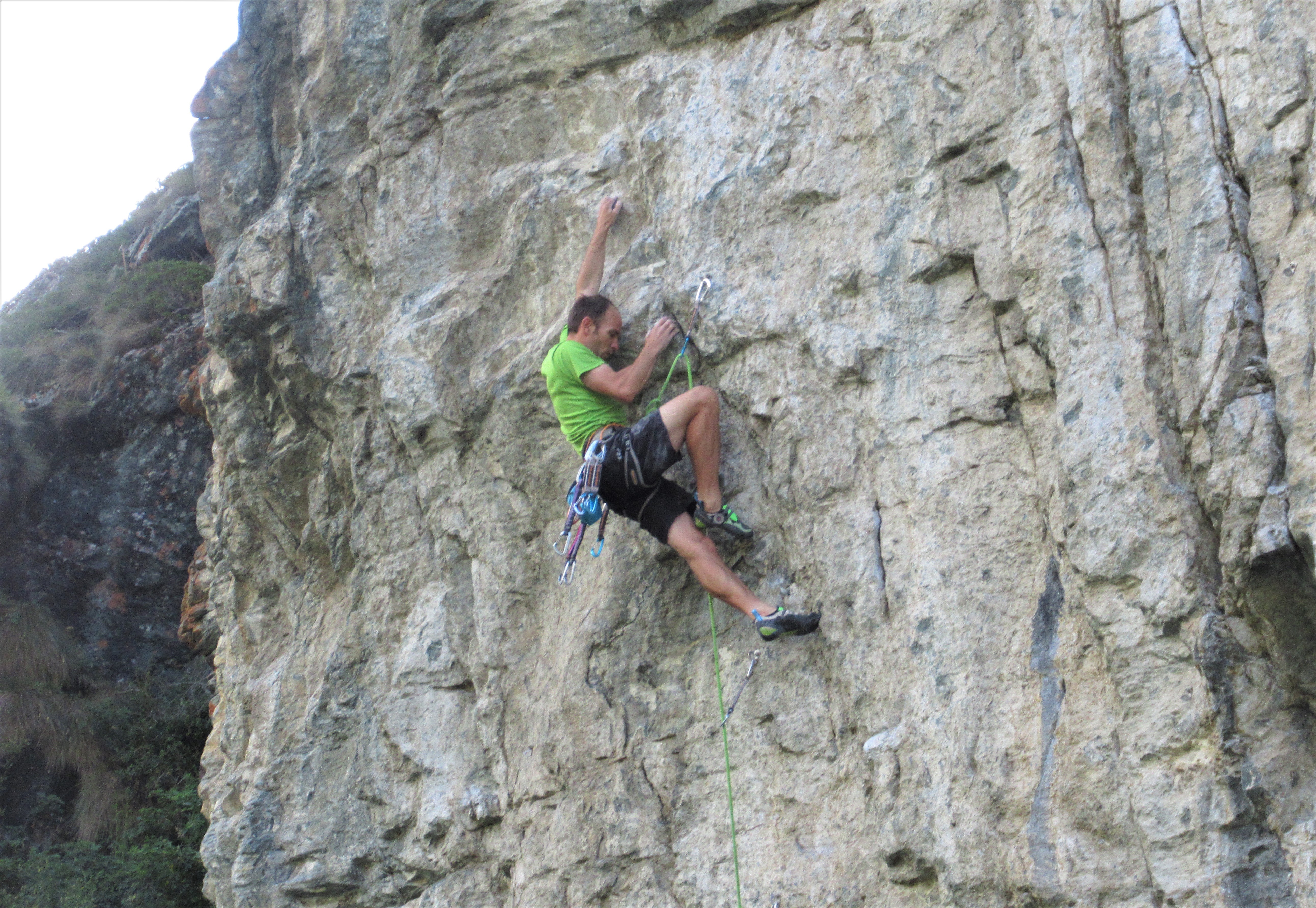 The best part of the session was putting up a bunch of routes for Logan and his buddy Sam on the crags highly-featured and low-angled southeast face. They had a great time swing around, scrounging for berries and generally messing around. 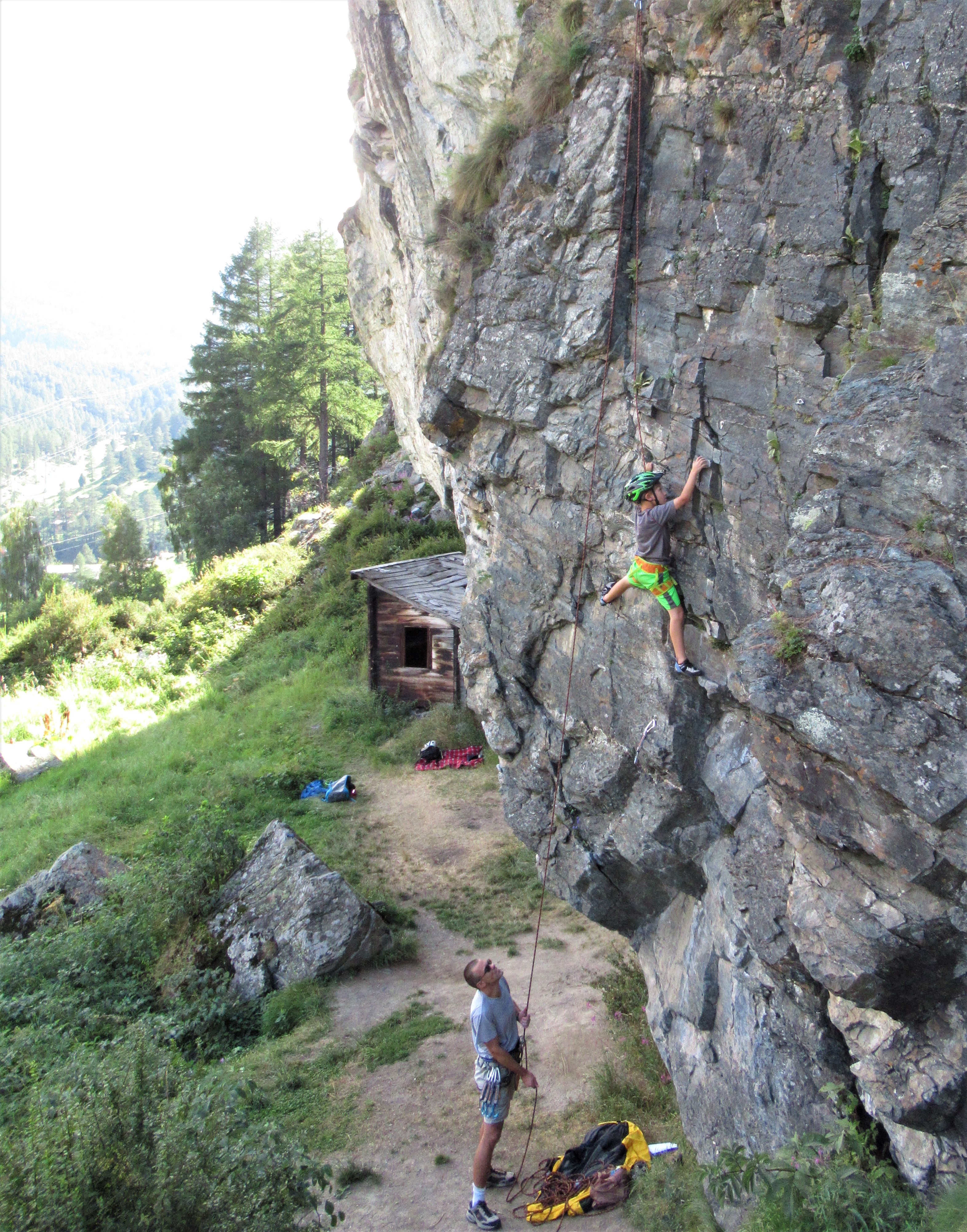 With the Matterhorn in our rear-view mirror, we headed back north to stay with my friend Rob’s family in Zurich. Nothing in the immediate Zurich vicinity caught my eye as far as a climbing destination, but Switzerland is small enough (and Zurich central enough) that we had plenty of good options within a short drive. 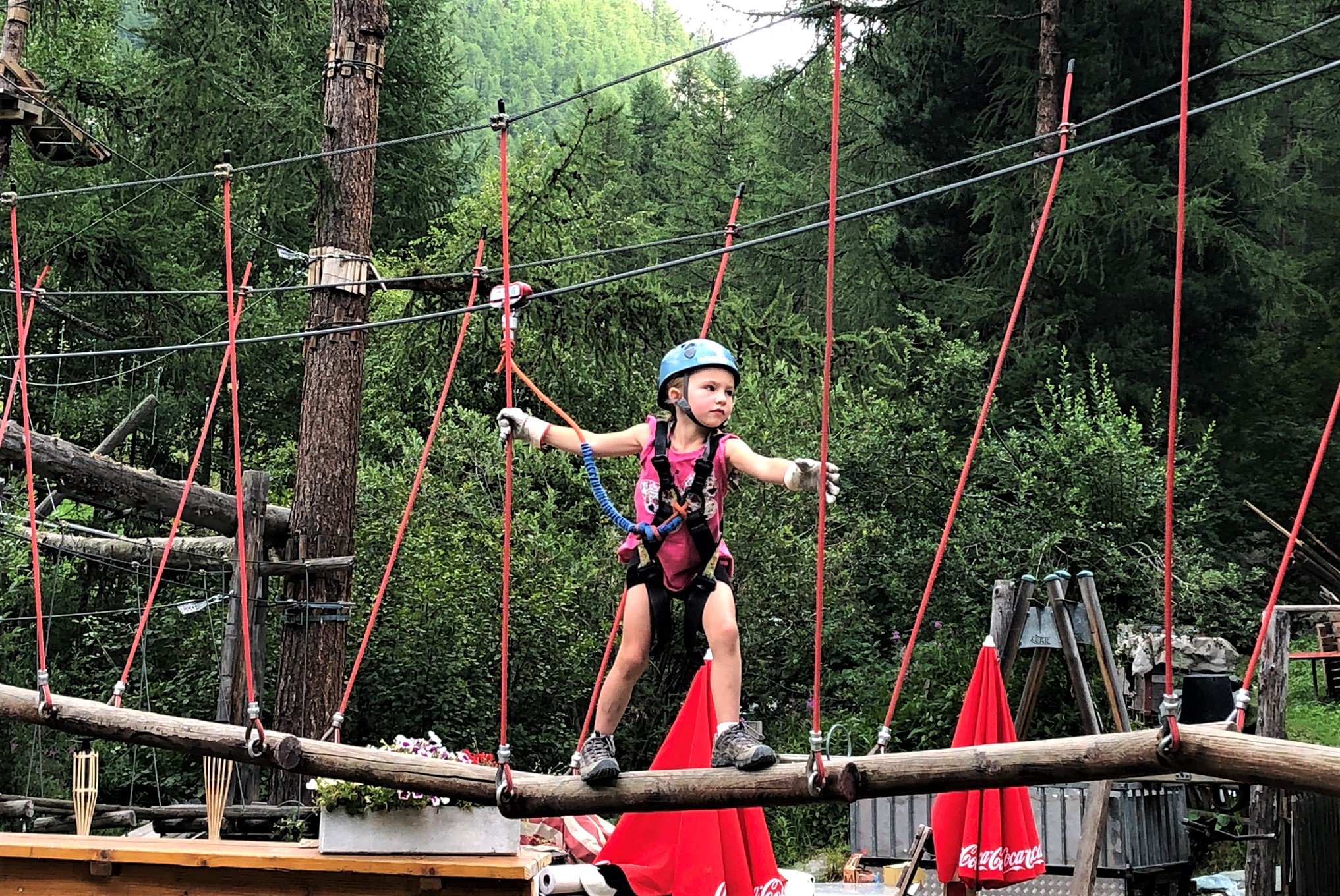 Zermatt has a sweet kid-focused rope course that all the kids loved.

I really wanted to visit a crag in the village of Engelberg I learned about just before we left called Schlanggen. This compact cliff sits at the back of a beautiful alpine valley and is stacked with 60-some tightly packed routes and linkups. At over 40-meters tall and continuously slightly overhanging, this white-and-blue-streaked limestone buttress is a paradise of endurance climbing. 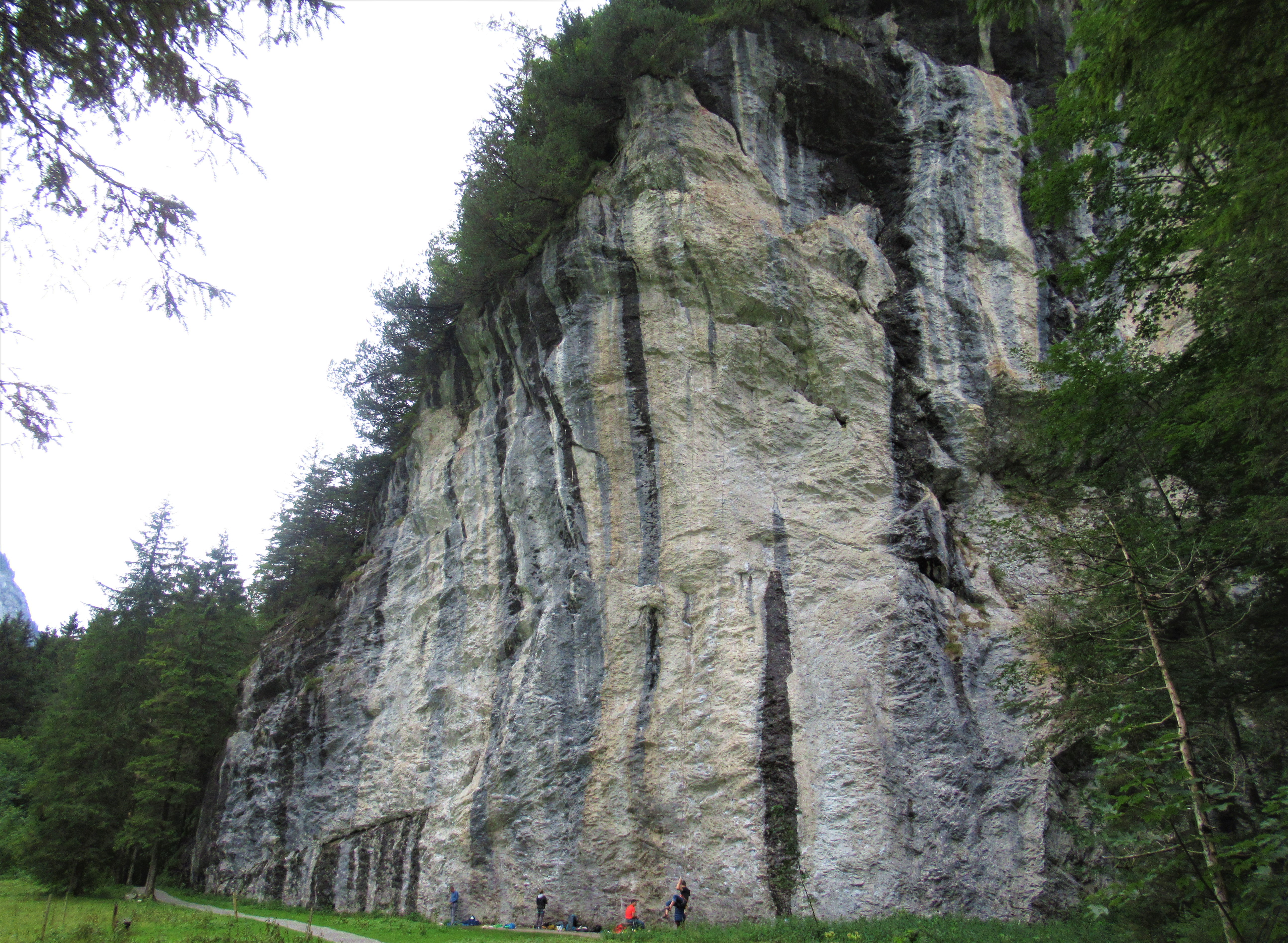 The Schlanggen cliff just outside of Engelberg. Rather wet on the day this was taken, but it was almost completely dry two days later.

My friend Rob and I split from the families to make a quick stop there on our way back from Zermatt. Many of the blue streaks were partially dripping with water, which limited the options somewhat, but there was still plenty to do. The rock is pretty unusual for limestone, and any given route will likely contain some tricky sloper climbing, pockets of all varieties, and intense crimping. It took a while to get used to the style, and in typical fashion I struggled to scrape my way up the 5.11 warmup. After that things started coming together. 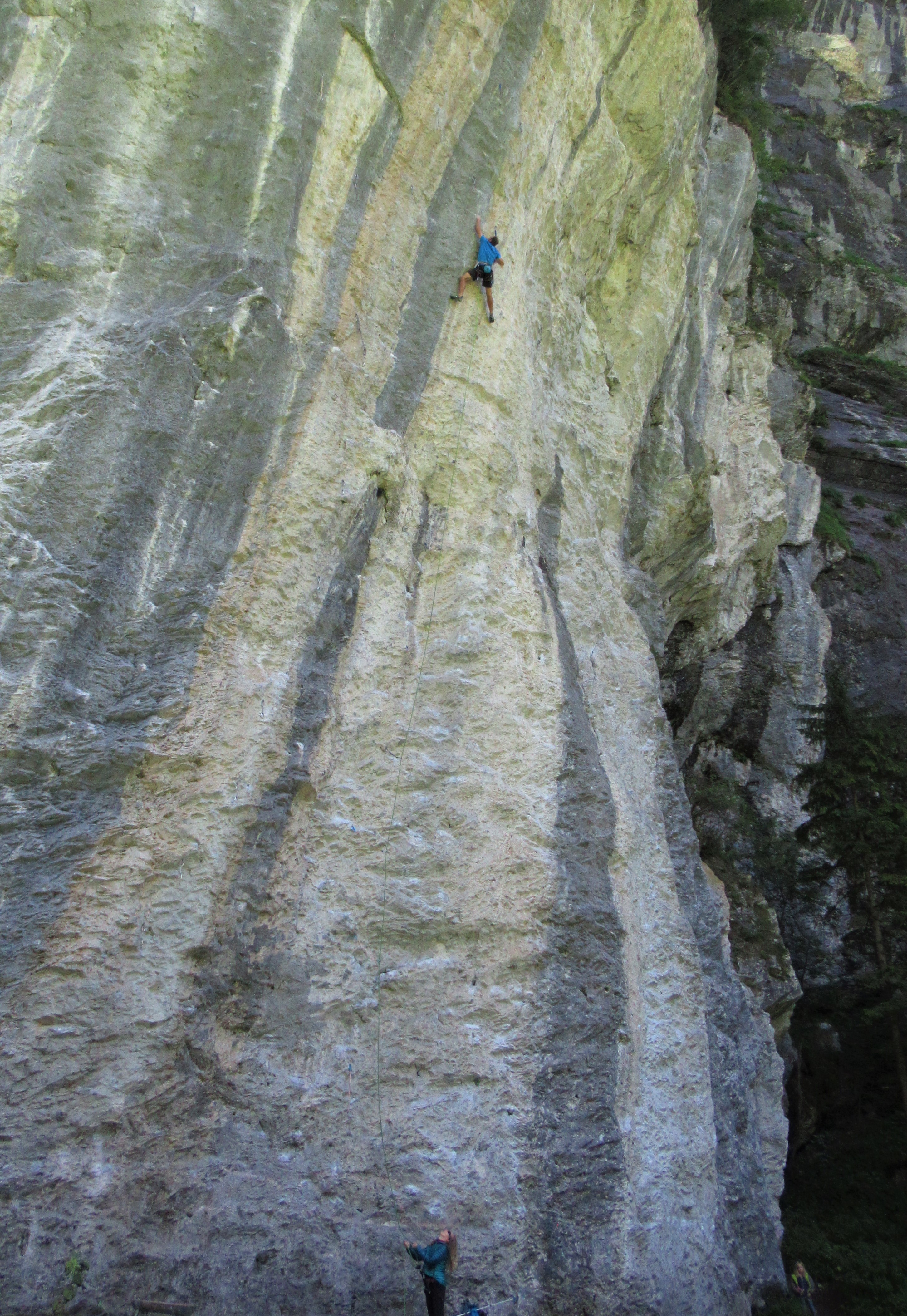 Attempting Onan, 8a, at Schlanggen.

I cruised up the outstanding 7c+ (13a) Zollo del Lachel, which required some intense pocket cranks and pumpy edging. Next I set my sights on the masterpiece No Time for Wanking (8a/13b). This incredible route opens with a 7b+ entry pitch to a good rest, before tackling a gentling overhanging pillar of velvety gray flowstone. The crux is a devious and reachy sequence working off a sharp undercling crimp to reach distant gastons. If you scrape your way through this bit, you are rewarded with a long, pumping exit, slapping franticly between big slopers, culminating in a desperate mantle onto a holdless-shelf just below the anchor (or at least, that’s how it was for me, haha). The pitch was absolutely phenomenal and easily the best route I did in Switzerland. 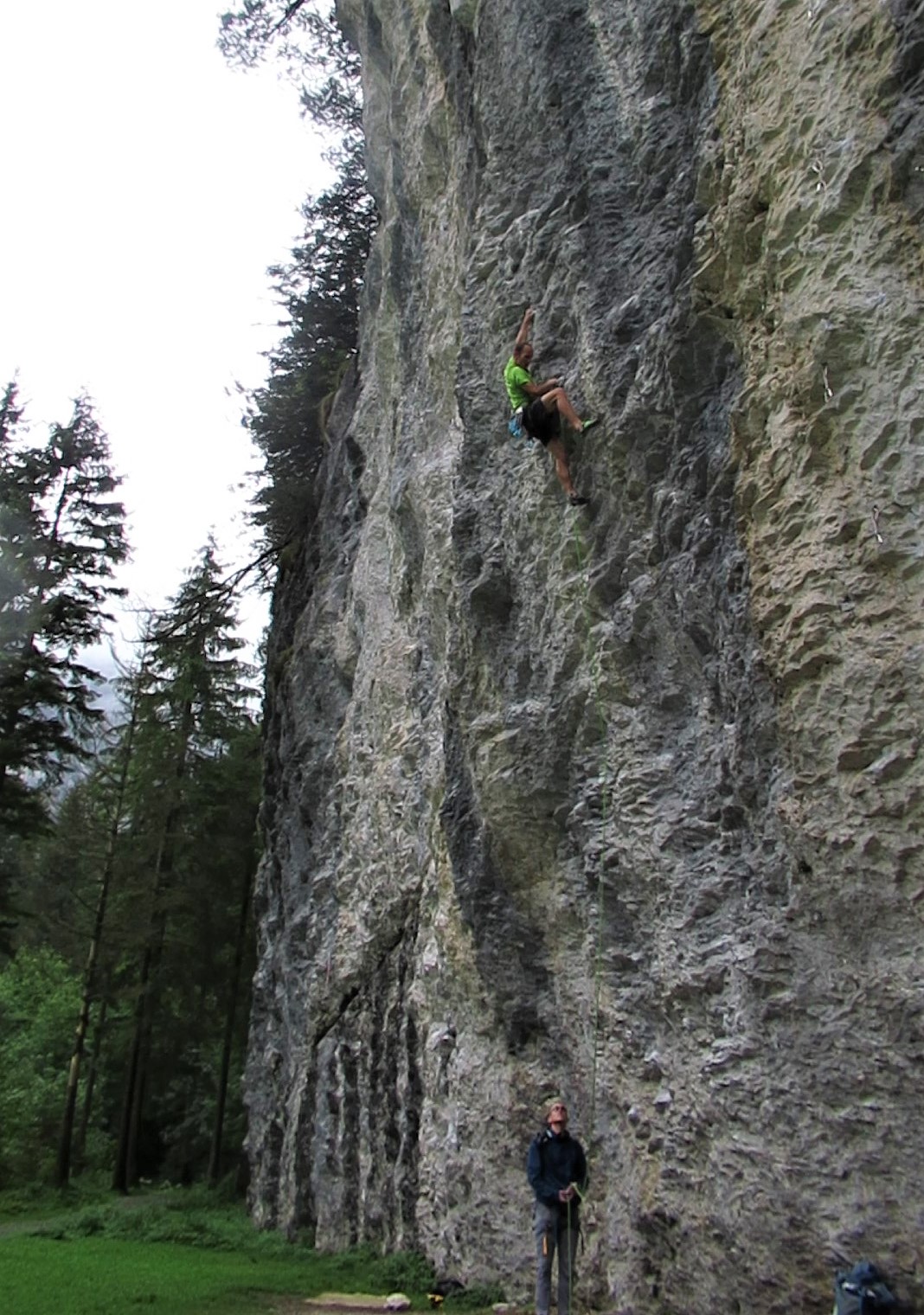 Low on No Time For Wanking, 8a, Schlanggen. Could you imagine being in such a hurry?!

In short, I loved climbing at Schlanggen—it was hands-down my favorite stop. With one climbing day left I was torn between the prospect of returning, or visiting the super-highly-recommended crag Voralpsee in eastern Switzerland. While I really wanted to go to Voralpsee, and likely a first day climbing there would have been better than a second day at Schlanggen, I also wanted to take the kids up one more Via Ferrata, and there was a good looking kid-friendly route only a few miles from the Schlanggen cliff. 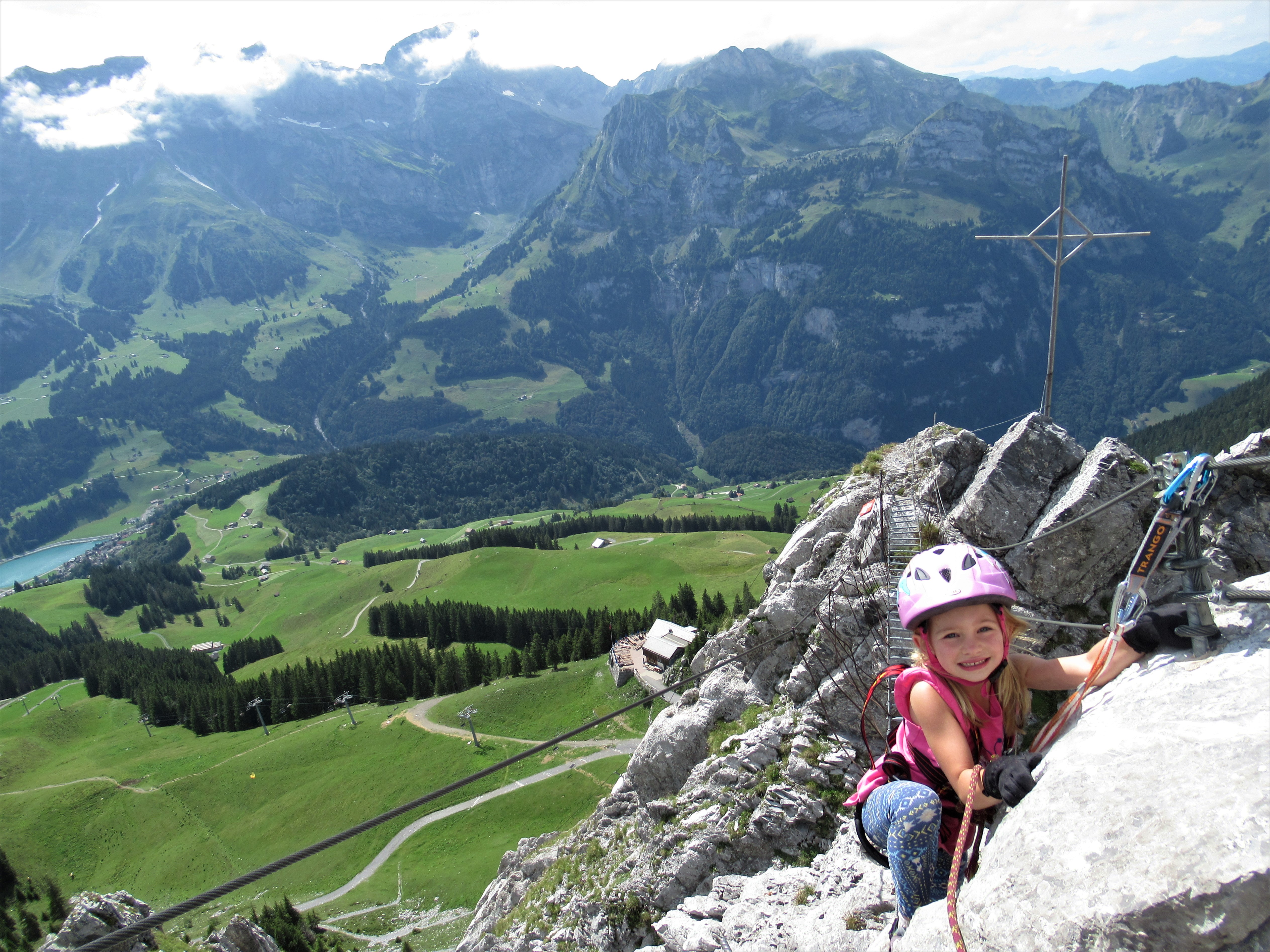 How can you say I made the wrong choice? Amelie cruising the Brunnistockli Via Ferrata.

By our second visit the rock had dried up completely, providing a bunch of “new” routes to try. Once again the routes did not disappoint. Everything I did was excellent, but the best route of the day was the towering, 35-meter Mousse au Thon (7c+/13a). This classic endurance climb was stacked with hard sections split by good rests, culminating in a long, burly boulder problem out the 30-degree overhanging visor right at the lip of the cliff. My beta was essentially to bare down like a mofo on some tiny sharp crimps and slap for the chalk marks. Fortunately I hit everything well enough to get to the top. 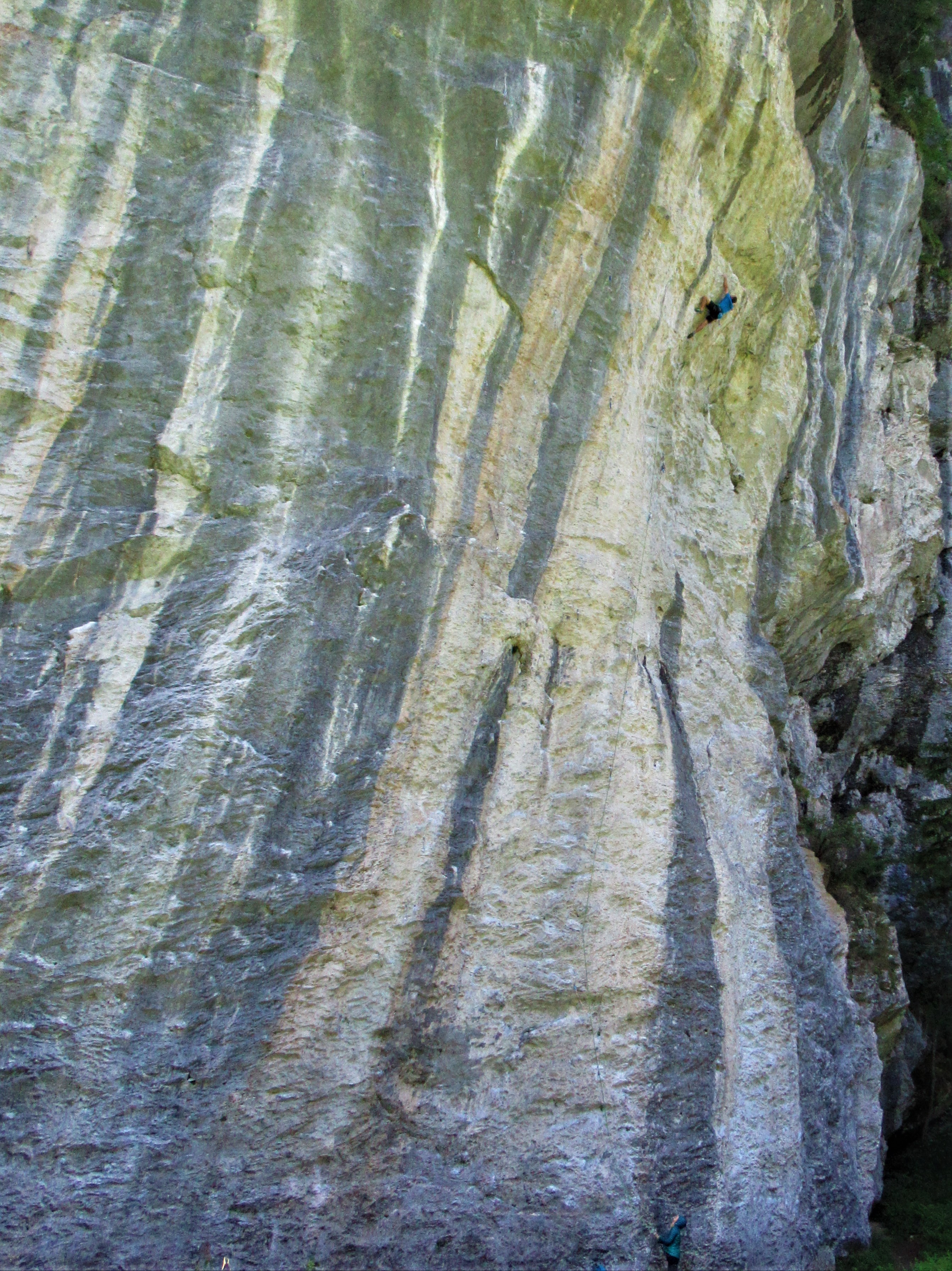 Overall I really enjoyed the sport climbing I did in Switzerland. The country is not particularly know as a sport destination, and its hard to recommend it to the pure climber over more traditional destinations like Catalunya, Provence or the Mediterranean islands. However, if you are looking for crags that are a bit less polished, or climbing isn’t the primary focus of the trip, Swiss climbing has a lot to offer and there are few better all-around destinations.

Rest day visit to the legendary Aescher Hotel above Ebenalp.