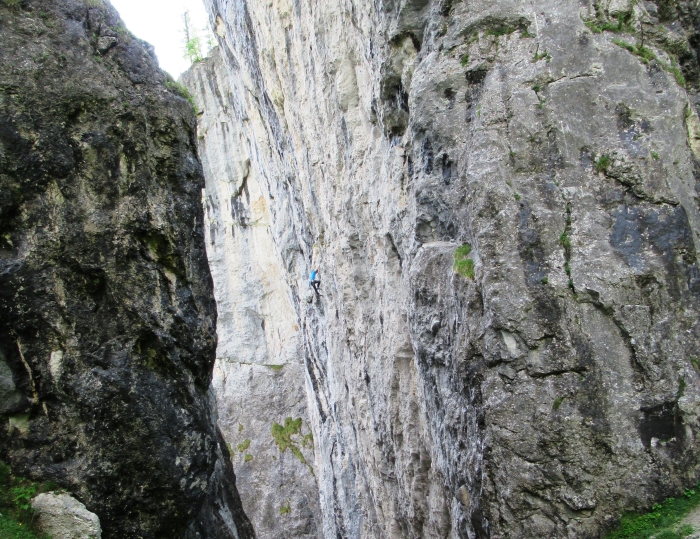 Despite its staggering collection of world-class, bolted multi-pitch lines, the Dolomites aren’t known for sport climbing. In fact I’d argue the sport climbing in the Dolomites is pretty much completely unknown, evidenced by the heck of a time I had finding information about it when I first set out. But I knew a range of thousands of (essentially) limestone peaks had to have a few killer sport crags sprinkled about. It was just a matter of uncovering them. As I suspected, they were there in abundance. Once I found them, the challenge was wading through the endless possibilities to identify the most-worthy crags.

After scouring the internet, I collected a couple guidebooks. The Rockfax guide claims to be a combined Trad, VF and Sport guide. This book is absolutely stunning, and I recommend it to any climber visiting the Dolomites, for general orientation if nothing else. However, it is NOT a sport climbing guide. It only includes a handful of over-used crags, none of which seemed particularly appealing. I ended up using “Sportclimbing in the Dolomites” by Vertical Life. This book is short on details but provides the bare minimum needed to visit more than 50 distinct crags of all varieties, with text provided in three languages including English.

Prepping the photoshoot at Salares. The cliffs of Val Badia are off to the left. 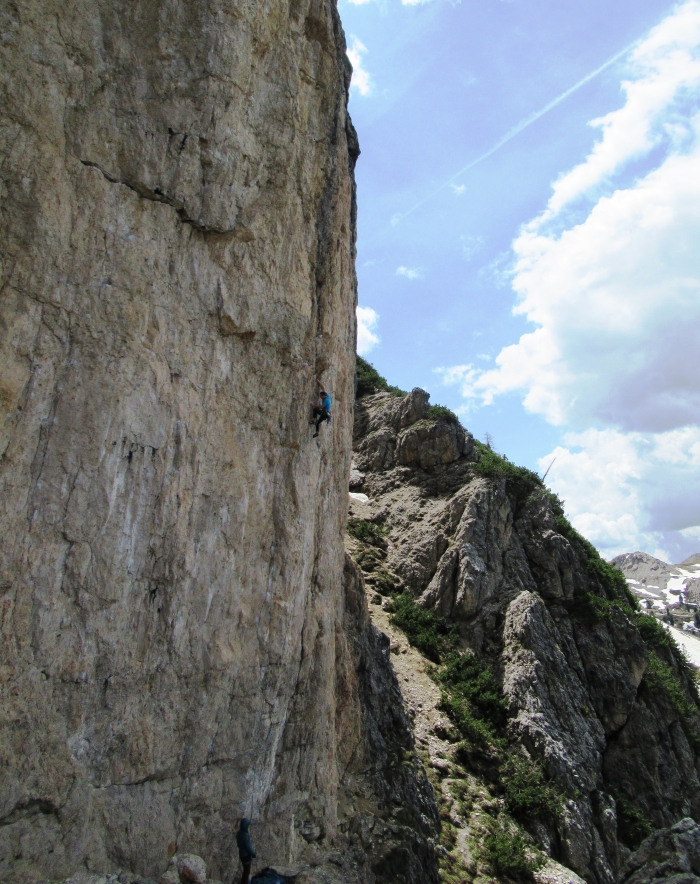 I started by looking for crags that promised to be dry. These were fairly easy to find (the yellow stone tends to be dry), but I quickly regretted this strategy. We visited two dry-ish crags in a row, Franchi (aka Scheweg) and Salares, and both were disappointing. Granted we arrived at Franchi in a rain storm, and were lucky to climb at all. Only a couple lines were dry, neither were remarkable, nor were we impressed by the appearance of the wet lines. The defining memory of that day was an interminable game of keep away we played with a local crag pup (I absolutely could not leave without my left Oasi—it was only the first day and those shoes are king on overhanging polished limestone!)

Salares was a distinct improvement, but I quickly noticed a pattern—the dry yellow stone tended to be heavily fractured. I mean egregiously fractured! In fairness, I never broke any key holds, but it was unnerving to be constantly teetering on what appeared to be vertically stacked rubble. It certainly made me think twice about the alpine rock routes. The saving grace of Salares was the incredible view of Val Badia off to the left and an exciting rope swing. So after two days of disappointing rock, I decided we would go for what looked like the best stone, and just deal with whatever wetness we encountered. This turned out to be a great compromise.

We turned our attention to an incredible table-top of limestone below the Marmolada called Laste. Laste is in the discussion for “best sport crag in the dolomites.” The setting is idyllic, with stunning views of the north face of the Civetta, among rolling hills of lush green grass. The rock is excellent but…weird. It’s very reminiscent of the lower left cliff at Rifle’s Anti Phil Wall. The holds are generally angular pinch fins, with lots of underclinging and sidepulls, a few pockets and only rare horizontal edges.

The rock quality was flawless, though spider-webby in spots due to lack of traffic (I even found a mini-scorpion in one pocket). The stone is very light grey making chalk virtually invisible and onsighting incredibly challenging. The west wall of the formation was pretty-much completely dry and the climbing here was phenomenal. All the routes were long, sustained, cerebral and rewarding. I really felt like I accomplished something every time I clipped the chains at Laste. This was also one of the only crags where we encountered other climbers, on a weekday no less, surely a sign of its quality. 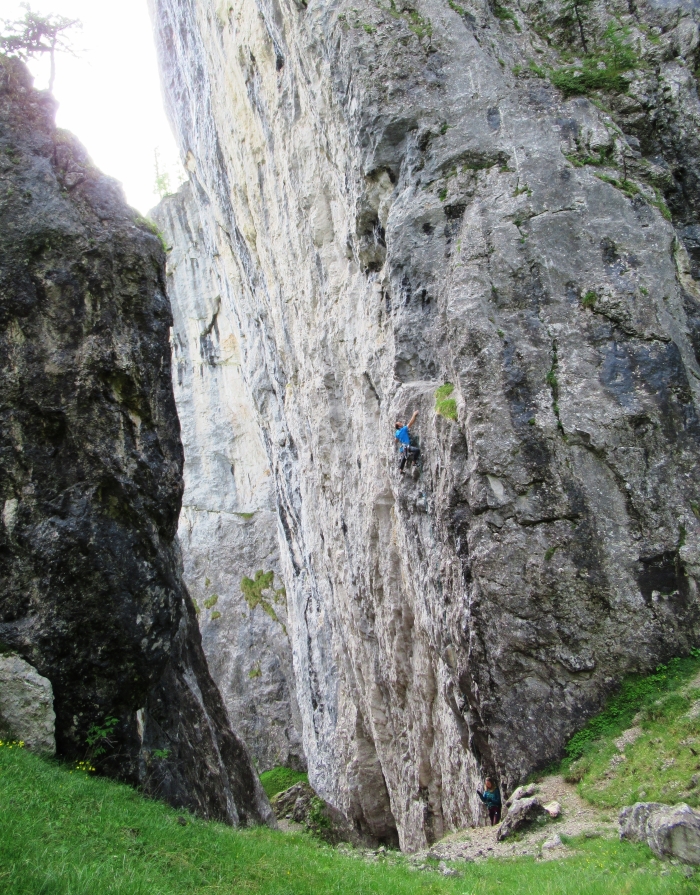 It took three days, but I felt like I finally figured out how to pick the crags. We still had most of the trip in front of us and now that I knew what to look for, I was really excited to check out some more incredible-looking dolomite crags….

Picnicing at the Laste parking lot, with the north face of the Civetta in the distance.

One thought on “Sport Climbing in the Dolomites”