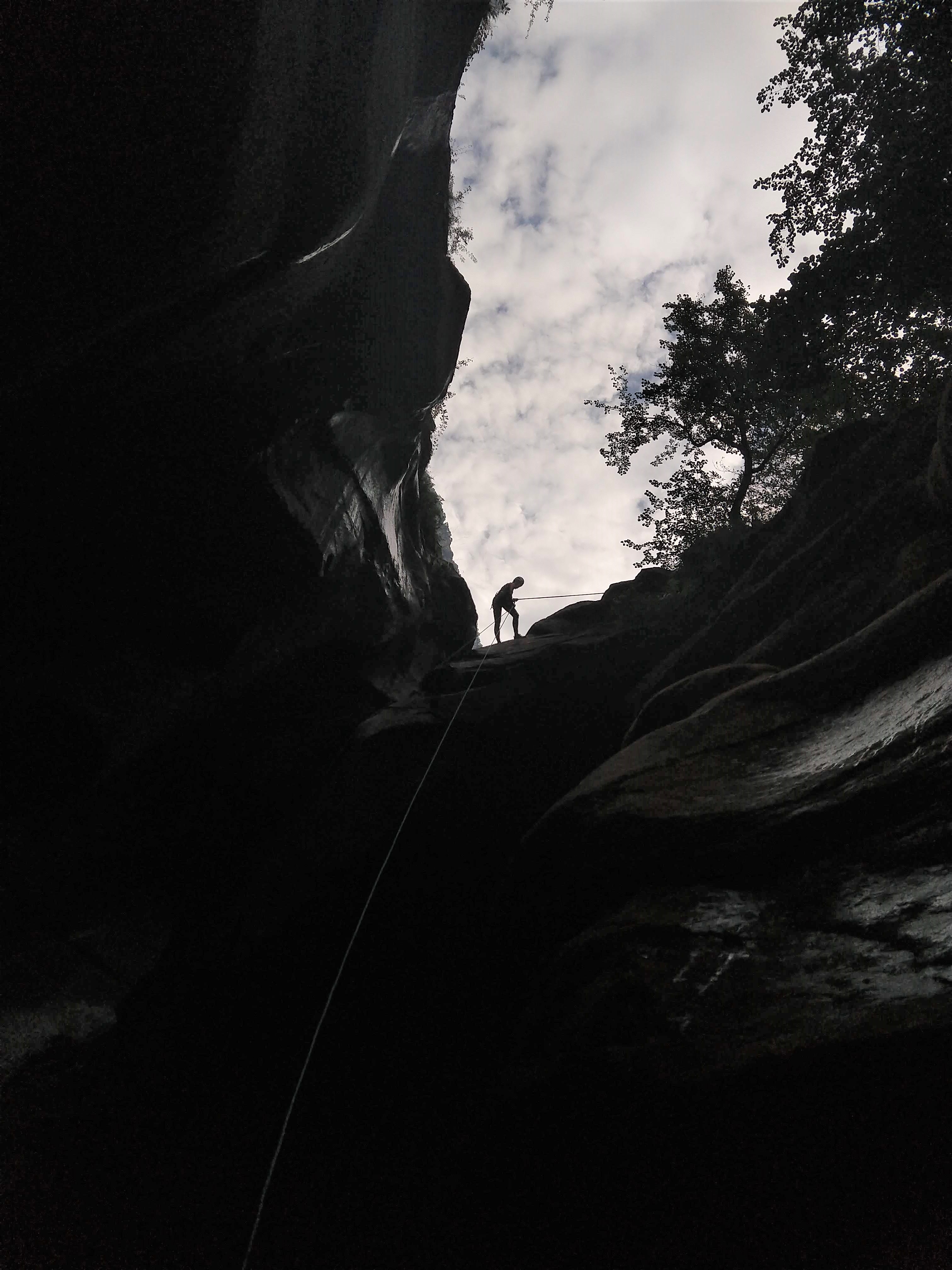 Dark and foreboding anyone? How about some 45 degF water at 9am? Photo Rob Radtke.

The primary motivation for our trip to Switzerland was to visit my friend Rob and his family, who had recently moved to Zurich. I first met Rob in 1999*, on my first day of active duty in the Air Force. We roomed together for several years and shared many crazy adventures and near-death experiences during the fearless era of our early 20s. Rob introduced me to Arrested Development, Family Guy, and College Football, and I introduced him to climbing and canyoneering.

[*Oddly enough, Rob and I crossed paths 5 years earlier, unbeknownst to us—we were both Cross Country runners in High School, and although I lived in Oregon and Rob in Michigan, we both ran in the same race at the 1994 Junior Olympics National Cross Country Championships in Reno, Nevada] 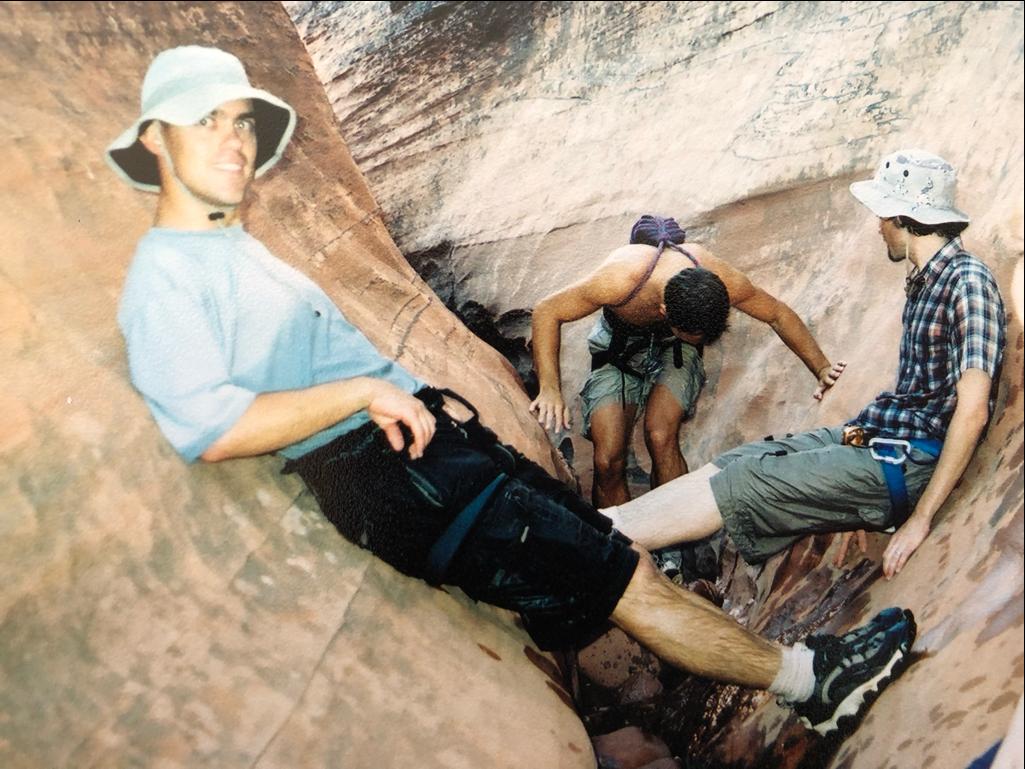 When we told Rob we were coming to Switzerland, he immediately proposed a canyoning excursion in the Ticino region, just north of the Italian border. This was truly a special opportunity. I’ve probably descended a good 100 canyons, all across the Colorado Plateau, and even in the Blue Mountains of Australia. While the desert southwest is stacked with world class slots, one thing it lacks is whitewater canyoning (those with continuously flowing water). Despite 25 years of canyoning, I’ve only done two flowing slots, both of which were quite mellow compared to Rob’s proposal.

Rob’s guidebook was bursting with amazing options, but we honed in on the Nala Inferiore itinerary, above the tiny village of Osagna. We picked this one because it was among the few that made both the list of “spectacular canyons” and “short canyons.” It appeared to have great narrows, incredible rappels, and outstanding scenery. The guidebook described it as “one of the most famous and beautiful canyons in Ticino…an intense route that presents the sort of technical passages canyoners dream about…one of the most spectacular aquatic descents in Ticino that will leave you with lasting memories.” 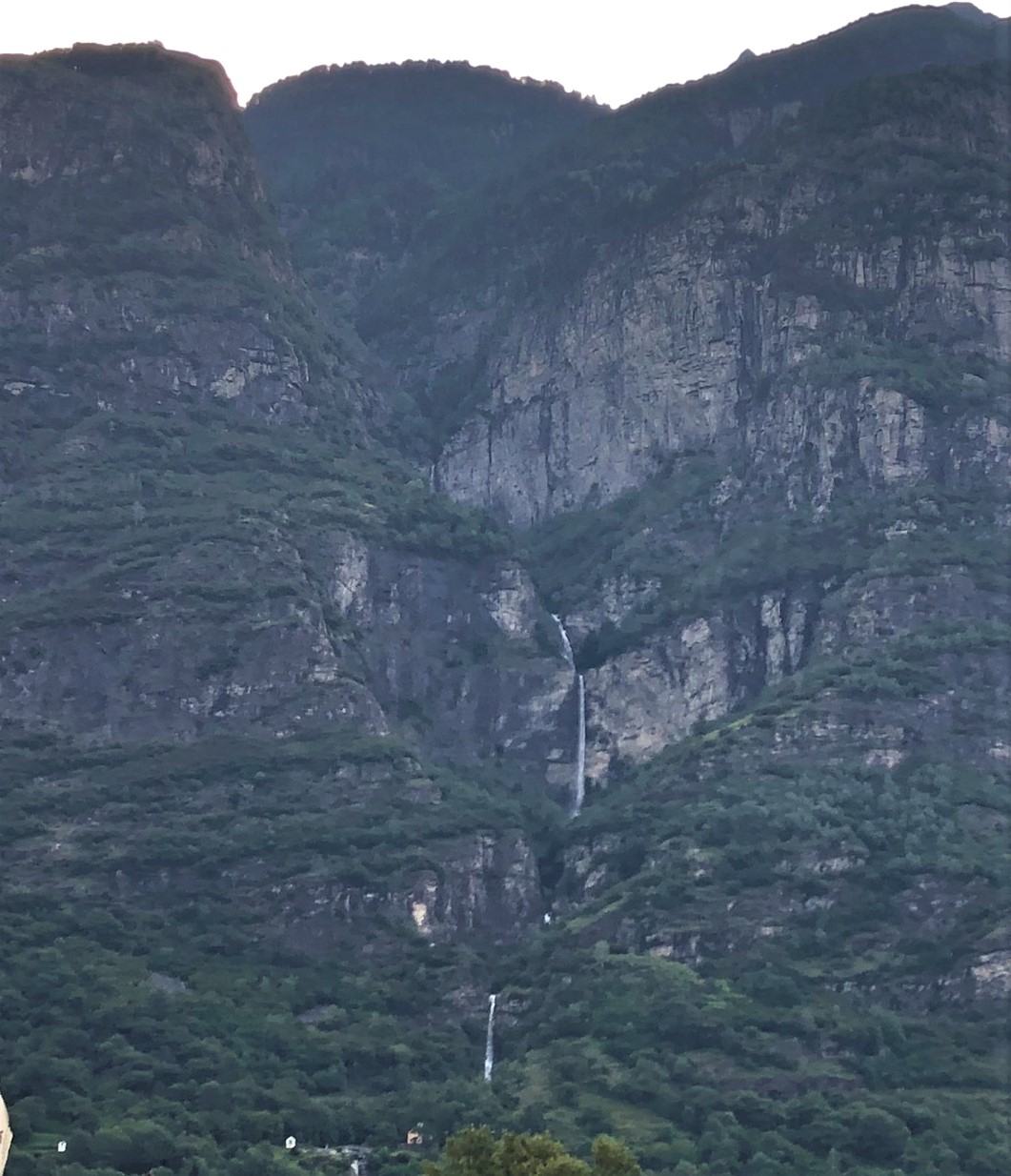 Waterfalls above the village of Osagna, in southern Switzerland. Photo reluctantly taken by Kate Anderson.

Once we had a canyon picked out, the next challenge was finding suitable conditions. Water flow is critical in these canyons, and the entire region is regularly closed to canyoning due to high water. It rained quite a bit during our trip, and the canyons were forbidden the first couple times we inquired (fortunately there is a hotline you can call for status). Finally, on our last day in Switzerland, the canyon was open. Rob’s wife graciously offered to babysit, so Kate, Rob and I hopped in the car and zoomed down to Ticino. 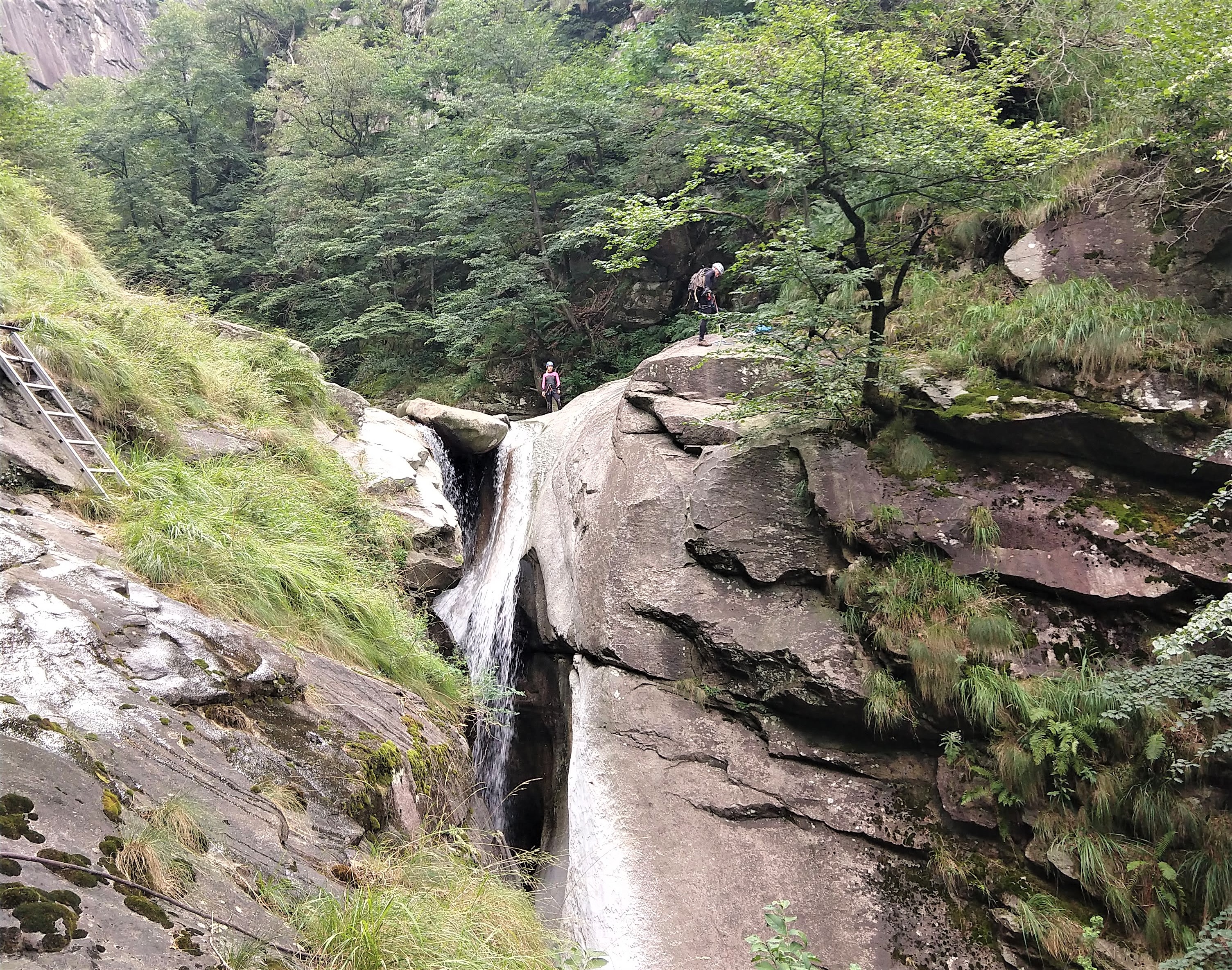 Kate and I rigging the first rappel into the slot. Photo Rob Radtke.

After assessing the water level at the bottom of the canyon, we hiked up the steep valley floor to the entrance rappel. The canyons here don’t waste any time—unlike Utah canyons, which are pancake flat by comparison, this slot drops 180m in 450m of travel—a 40% average grade! There was no opportunity to ease into the water either; the first rappel was 30m straight down into a massive swimming pool. The water was not as cold as it could be for a country enveloped by glaciers, but it wasn’t warm either! 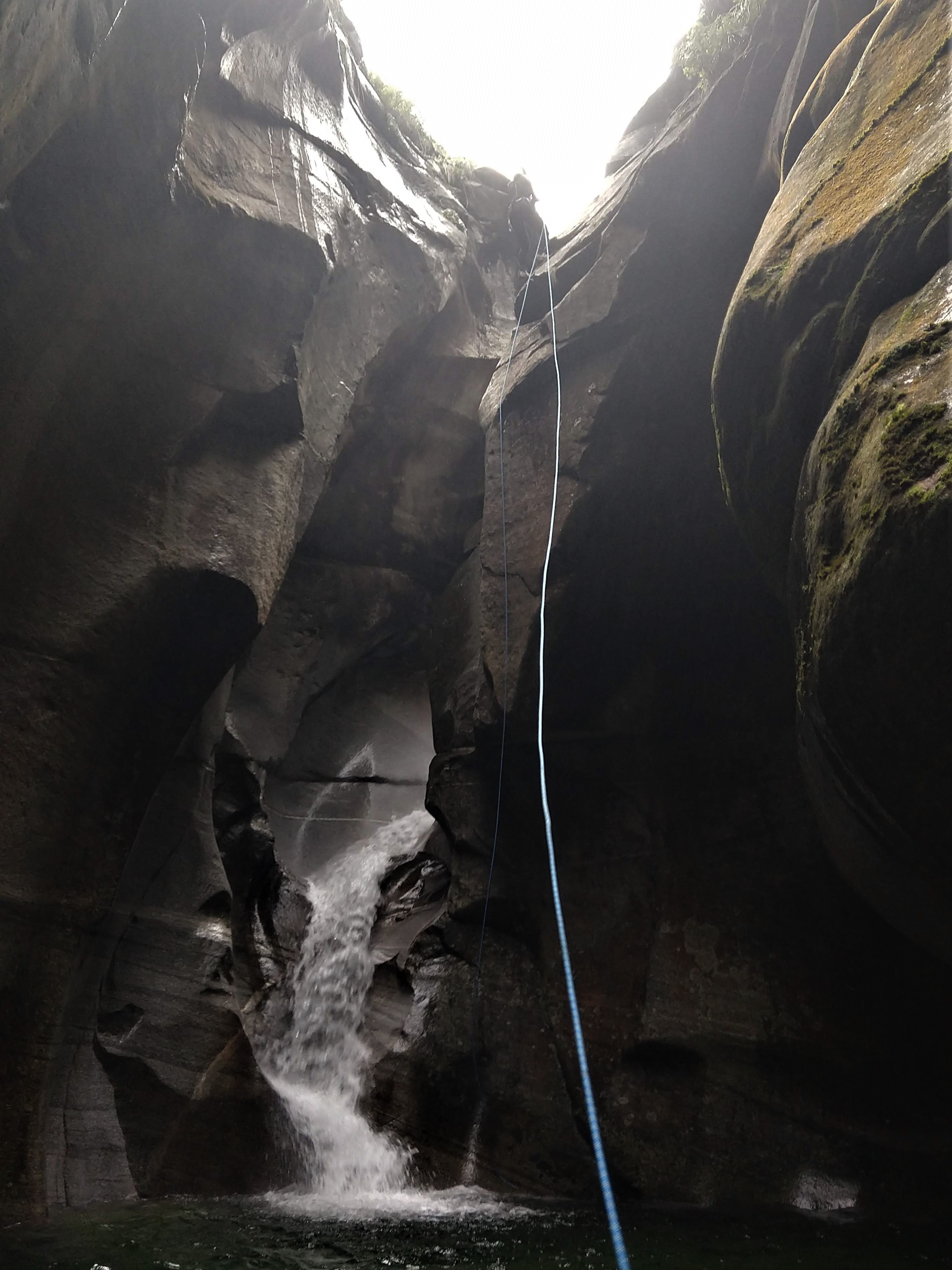 I did my hyperventilating doggy paddle to a lodged boulder at the far end of the pool, clipped into the anchor, and waited for Kate and Rob to join me. For the most part, the canyon had zero walking—you were either rapelling, or swimming. Usually the swim would end at the lip of a pothole or some other chockstone, at a precarious stance with water flowing right over the falls into the next rappel. The upper half of the canyon was neither comforting or secure; it was clearly the sort of place where an unprepared party could get into serious trouble. 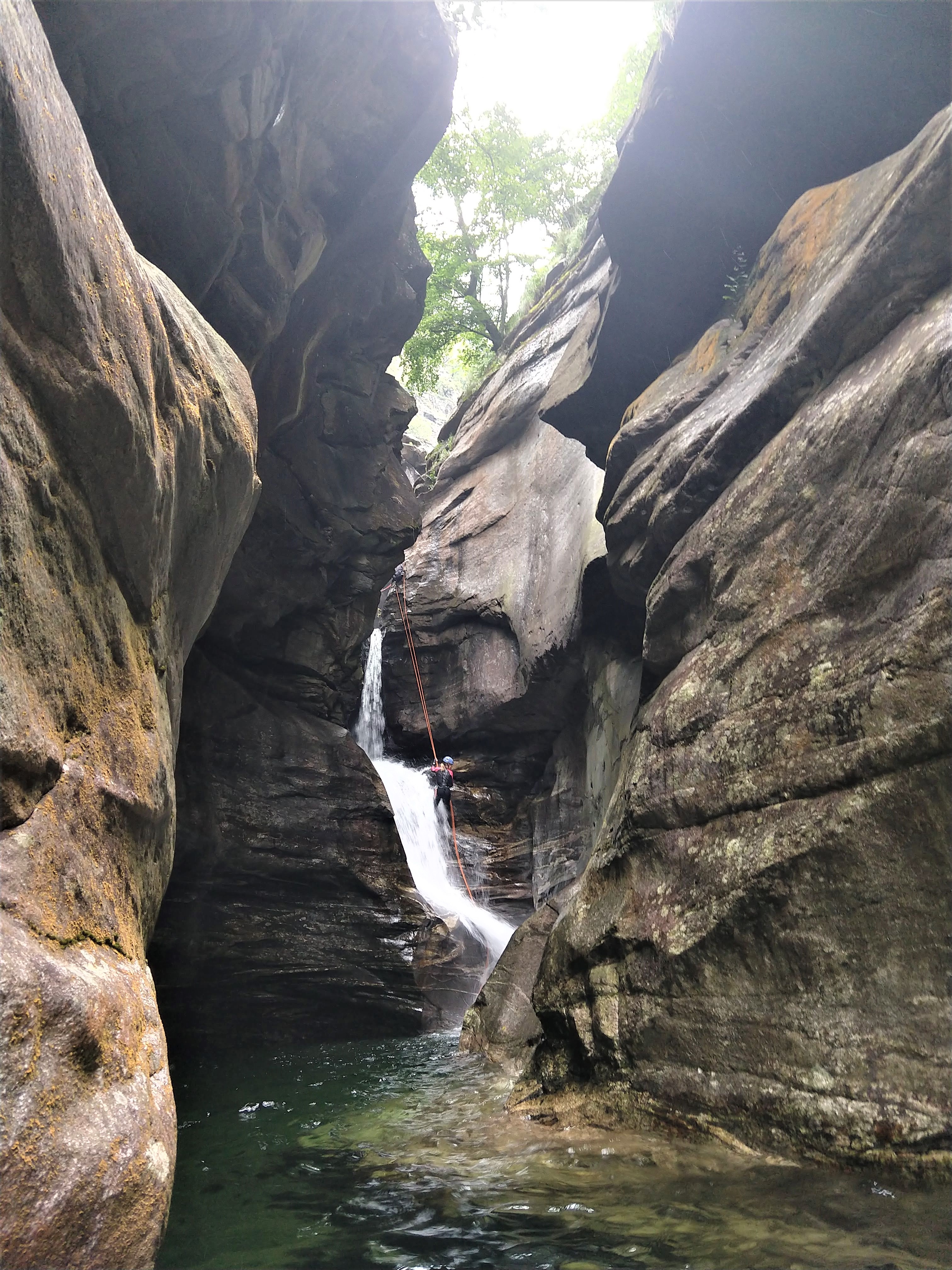 Kate rapping somewhere in the upper half of the canyon. Photo Rob Radtke.

The next hour was spent on four more rappels, ranging from 15-25 meters, followed by long, cold swims through the narrow, foreboding slot. Generally the rappels were pretty easy and not particularly intimidating, but the swims were challenging in the cold water with heavy packs, especially entering the pools on rappel, trying to unclip without dropping anything, while treading water. 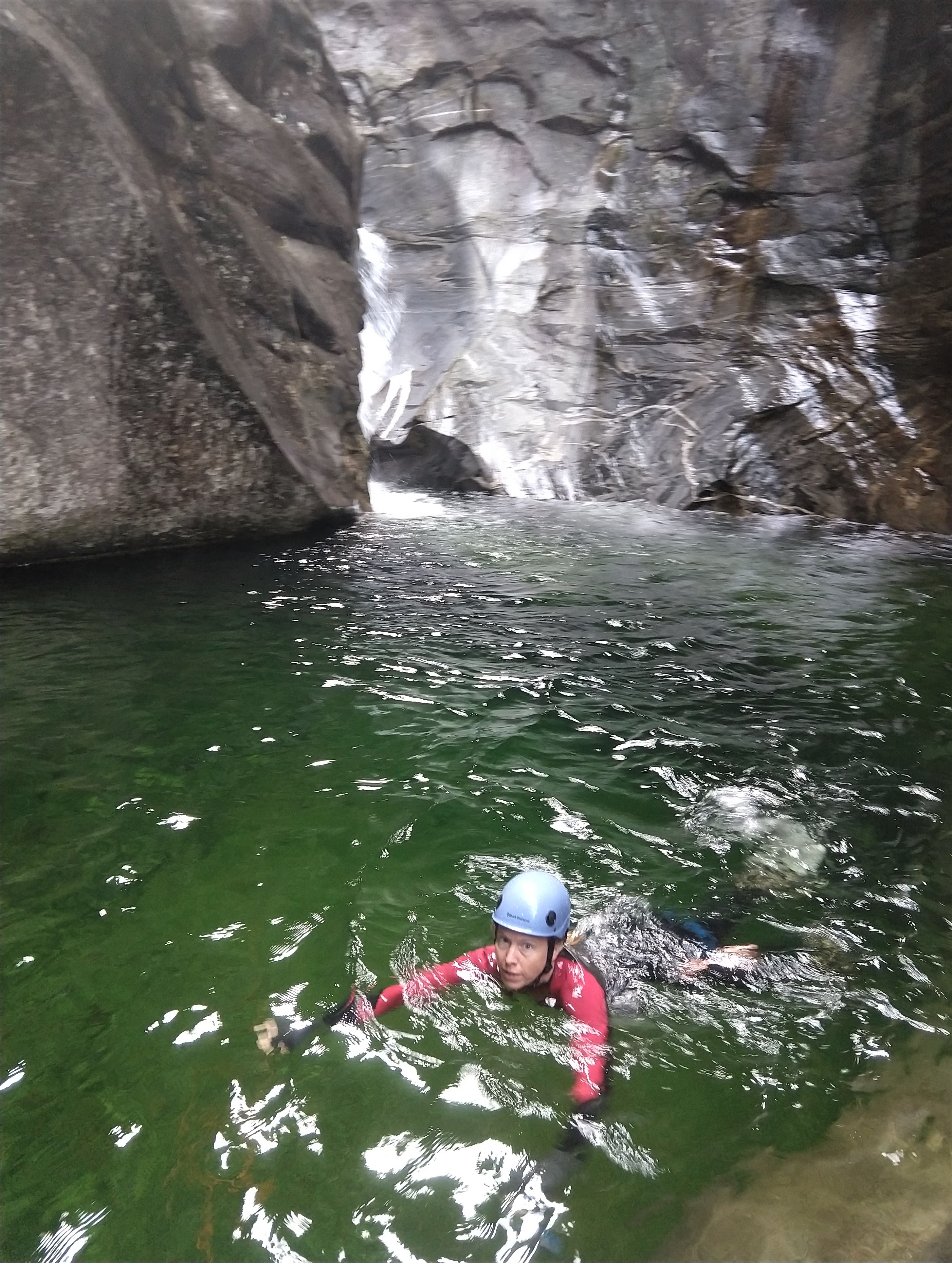 Kate trying to decide if this is Type 2 or Type 3 Fun. Photo Rob Radtke.

After the fifth rappel the canyon opened and there was an easy exit to the right. Kate took the opportunity to cut her losses and headed back to the car at this point. It was a good decision, with the two most challenging rappels coming up next. 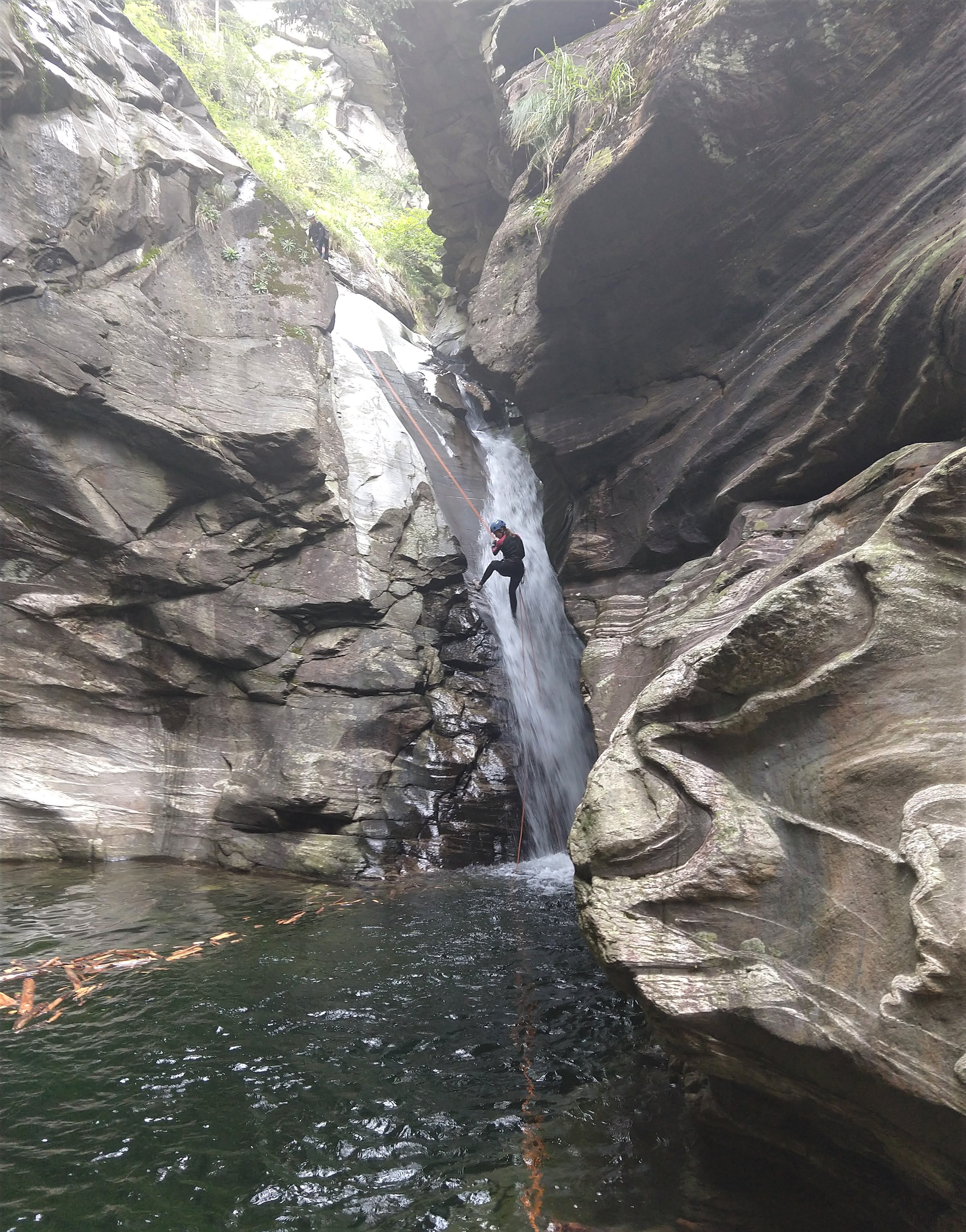 Rappel number 6 is straight down the incredible-yet-daunting 50-meter waterfall that Nala Inferiore is most known for. This rap starts easily, down a smooth groove tube a bit off to the side of the main flow, with the water stream fanned out wide. About halfway down the rap, gravity forces you directly into the water stream. As you descend beyond this point, the force of the water falling some 40-meters onto your head becomes riveting. I paused for a moment to absorb the situation and spontaneously, hysterically, burst out laughing. It was such a crazy, wild, ridiculous position to be in. It was both incredible and absurd. Why would anyone do this? Why wouldn’t you, if you could? 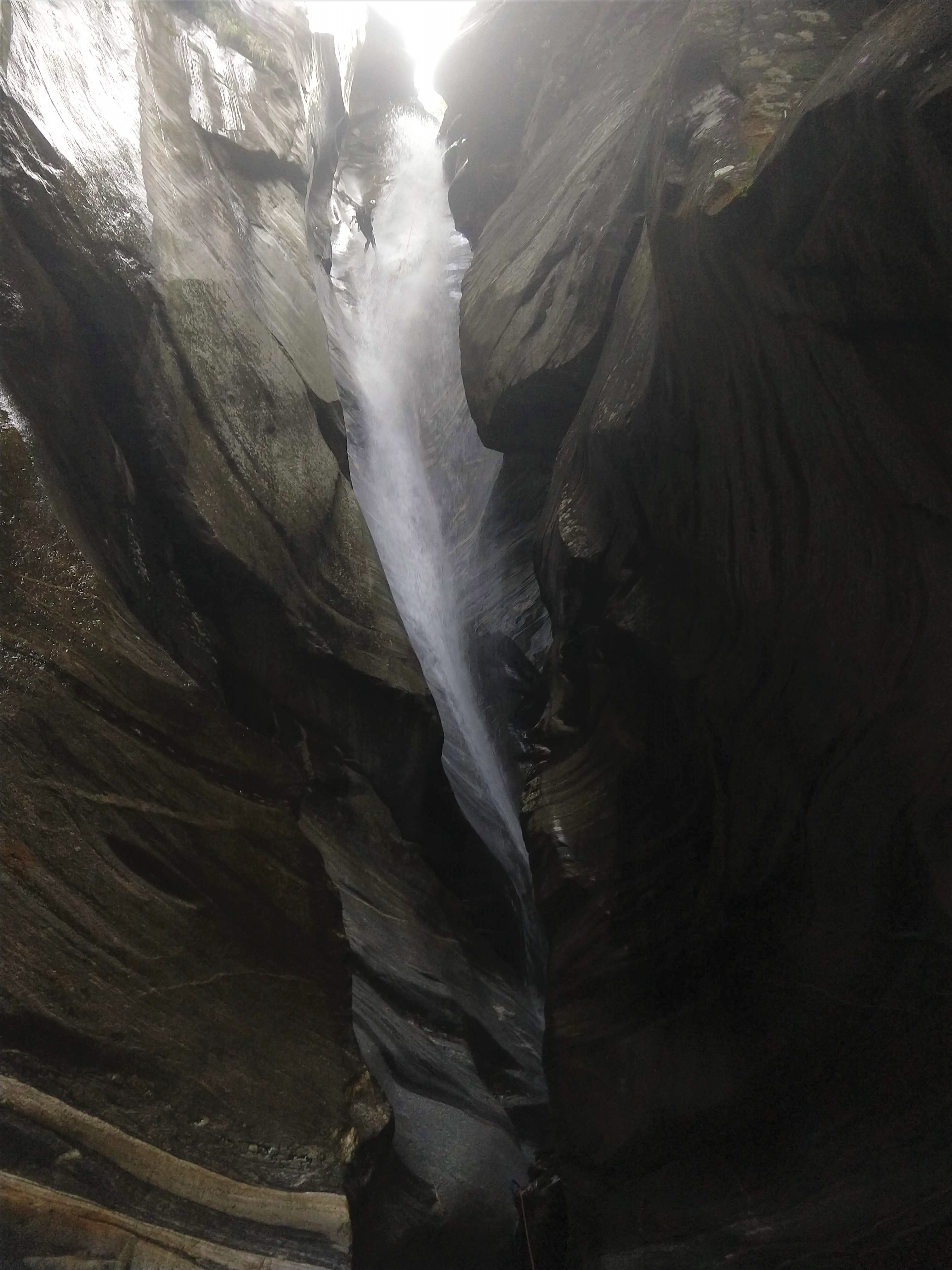 By the end of the rap, water was raining down everywhere in massive quantities. I had to time my breathing carefully to avoid mouthfuls of water. Mercifully, right at the end of the rap, a large cave appears to the right that offers an eerie stance, sheltered from the torrent. I unclipped from the rope here and Batman-ed the rest of the way into the pool so I wouldn’t have to mess with the rigging in the pool. 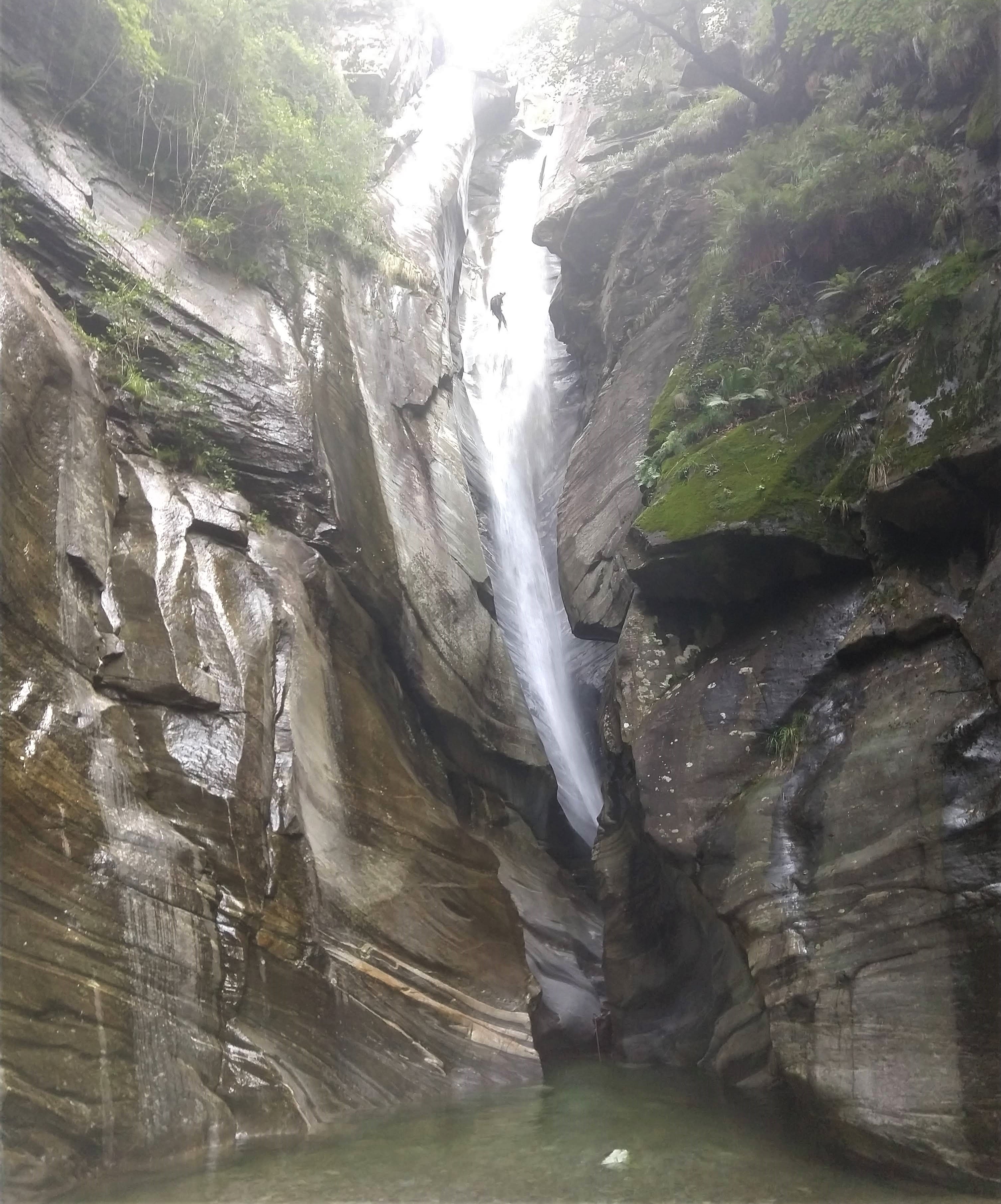 Another shot of the 50m rap. Photo Rob Radtke.

After yet another frigid, oxygen-sapping swim we arrived at the 7th rappel, which turned out to be the most difficult. Although “only” 25 meters long, this rappel drops over a car-sized lodged boulder, resulting in a freehanging/overhanging rappel right through the main water course. There was no way to avoid the full force of the river, and at one point I unwittingly titled my head to the right and got a firehose straight into my ear. Lesson learned! Once I could touch the canyon walls again I was able to direct myself out of the main stream and the rest of the descent was a breeze. 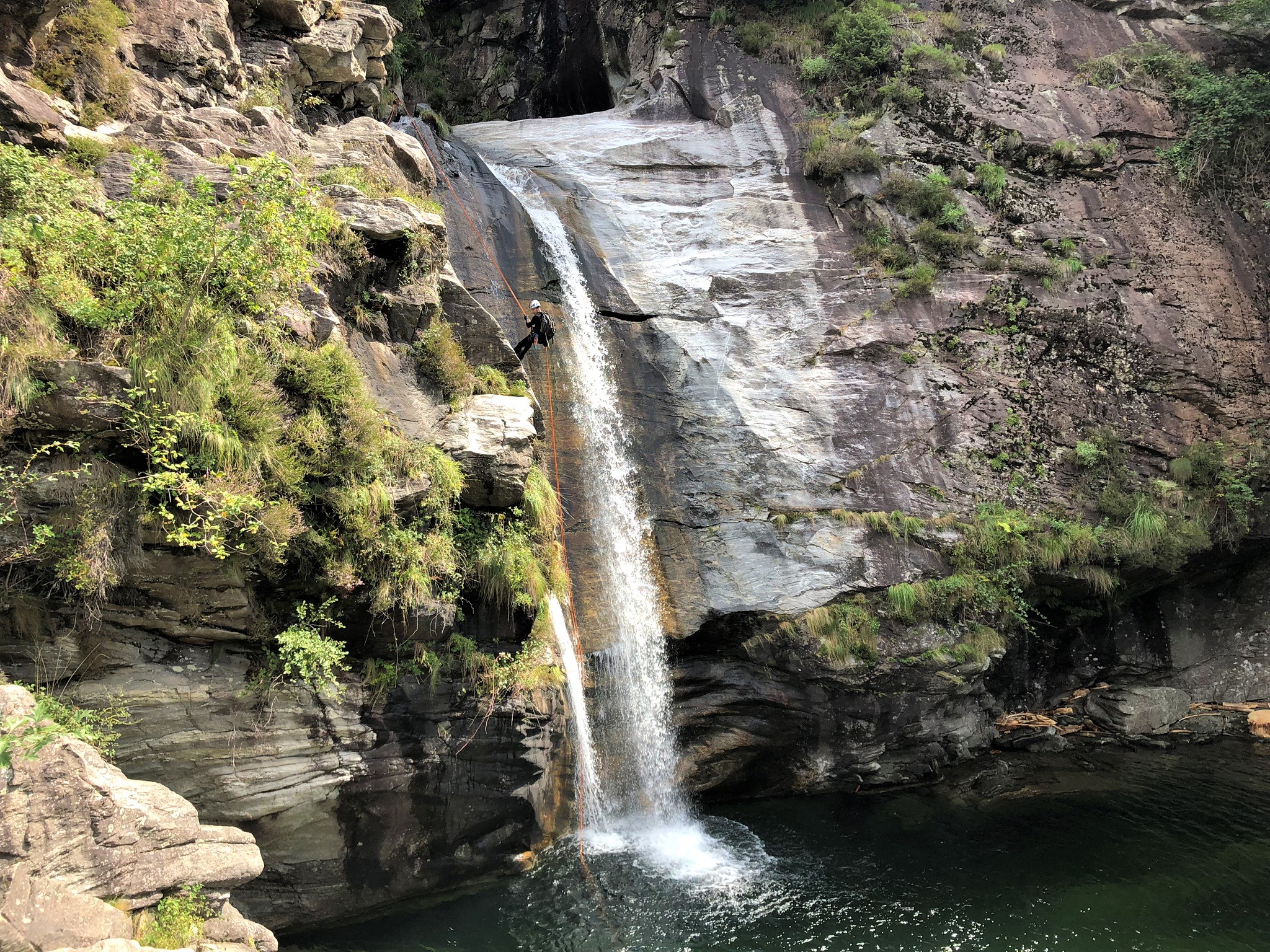 Enjoying one of the spectacular-yet-mellow rappels of the lower canyon. Photo Kate Anderson.

After the two crux rappels, the canyon’s character changed completely. The slot widened, the pools became shorter, and the rappels much more straightforward. The chasm was no long dark and intimidating, but now open, bright and welcoming.   We quickly reunited with Kate, who was waiting for us on the canyon rim, and then made four more easy and uneventful raps to the final swimming pool. 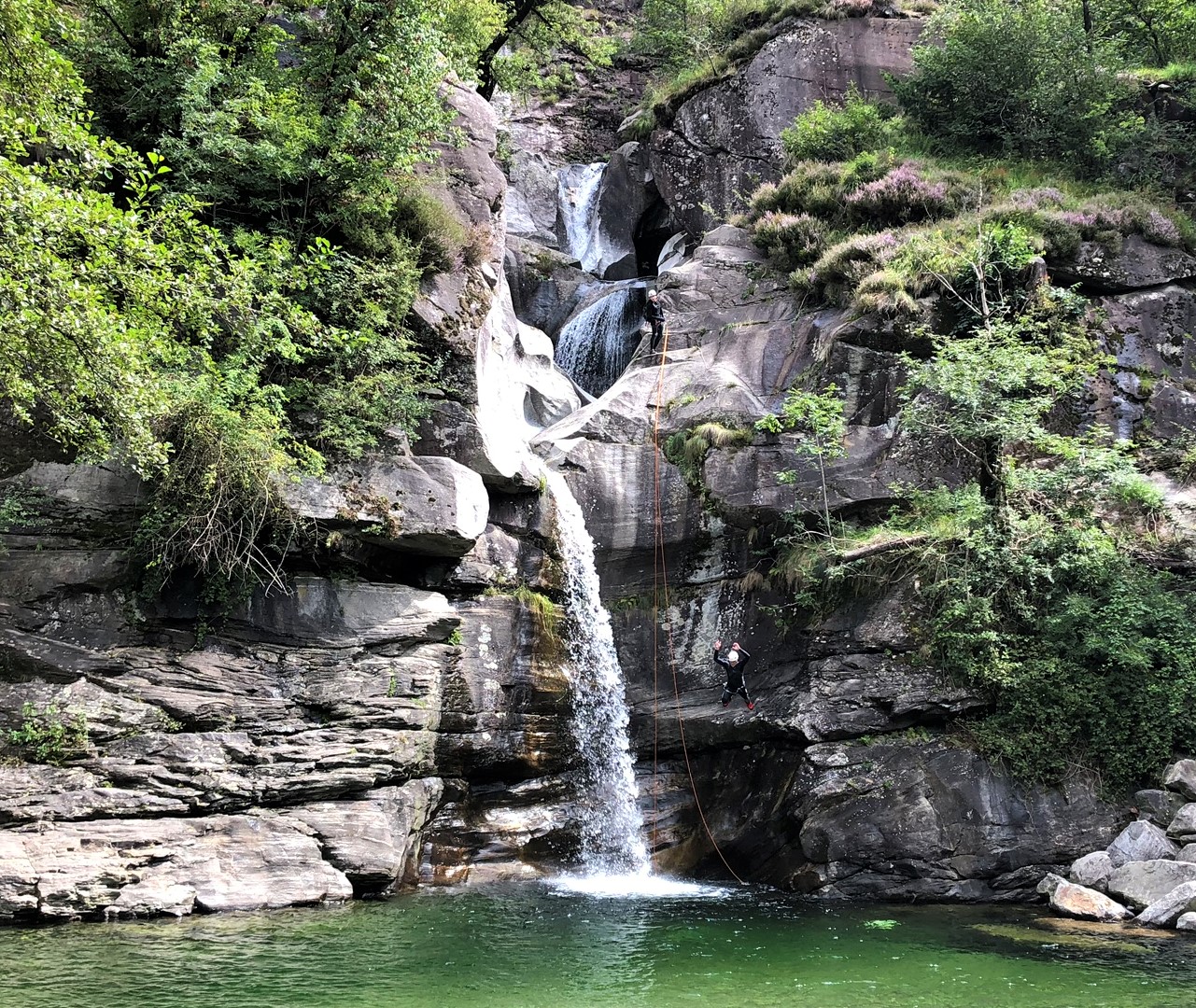 It was an incredible experience and one of the most unique I’ve had in a canyon. It was a lot different than canyoning on the Colorado Plateau—the scenery is totally different (and not as good in my opinion). On the other hand, the swimming pools were not steaming cesspools of fermenting cow shit either (although some of my best mates would argue that adds to the charm). I relish the opportunity to do something different, and Nala was most certainly that. After desceding Nala Inferiore, I mostly felt contented and stoked to have been given the opportunity to experience such an amazing place in good company. It was one of the top two highlights of the trip and to do it on the last day really wrapped everything up in the best possible way. Thanks Rob for the incredible experience and hospitality! 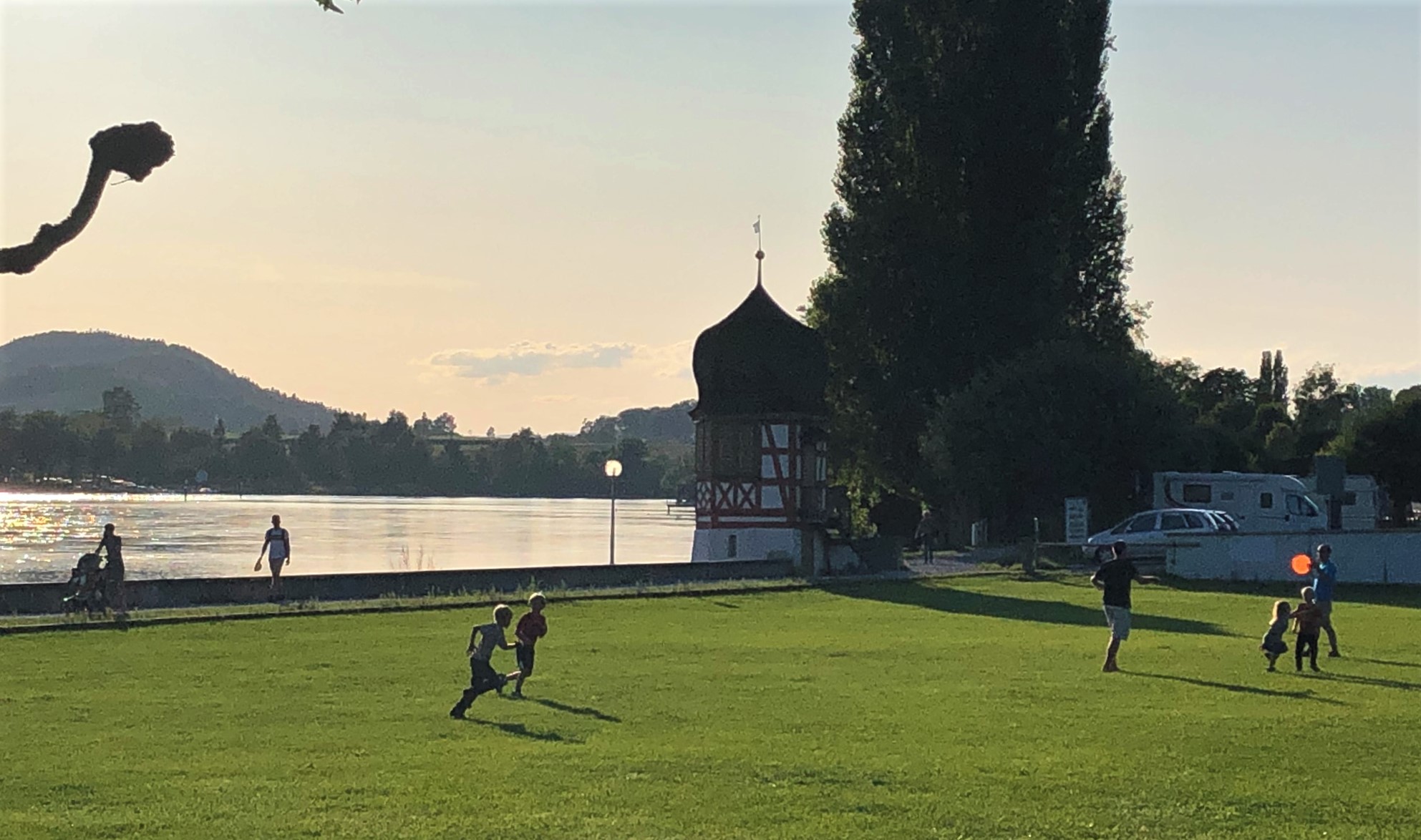 Teaching the kids to play Ultimate Frisbee beside the Rhine.