When I built my gym in the Lazy H, I never really put much thought into the angles of the walls.  I mocked it up with the joists and basically just eye-balled it.  Almost immediately it became clear that my campus board wasn’t quite as steep as it should be, and this has been an itch in the back of my mind for a long time.  During my fall campus phase I started doing some research on the “standard” angle for a campus board.  This research revealed that there is no standard, although one could make a really strong argument for 15 degrees overhanging, as a compromise if nothing else.  This is what Metolious advocates in their brochure, and some sources indicate this is the angle of the Schoolroom Board in Sheffield (although others say 12.5), a board that many others are modeled after.  Looking at photos of Gullich on the original Campus board, it appears that was around 11 degrees, so one might make an argument for that angle as well.  It appears to me that the board on Moon Climbing is about 17 degrees.  Some other sources advocate for 20 degrees (which happens to be the angle of the Foundry board; Jerry Moffatt’s climbing gym).

This is the campus board shown on Moon Climbing

The angle of the board can be important for several reasons.  First, it affects how incut the rungs feel.  Obviously the rungs will feel less positive on a steeper board, and should be slightly harder to grip.  But they should also be less painful to latch.  Second, a steeper board will keep your hips and lower legs further from the board.  In addition to keeping you from kicking the board as you get higher, this gives more room for the low hand to continue pushing down when you make really big moves (moves in which your low hand is below shoulder height).  Finally, the steeper the board, the less vertical distance one must travel to move from rung to rung.

My board was installed at the same angle as the south side wall, about 8 degrees overhanging.  At that angle, a move between two rungs spaced 12″ apart requires 11.88″ of vertical travel.  At 15 degrees, the same move requires 11.59″ of vertical travel.  Probably not a big deal, but consider the mythical 1-5-9 Max Ladder (Moon spacing, 22cm between rungs).  The lagging hand must travel 176 centimeters (almost 4 cubits!) across the board when going from 1 to 9.  For such a big move the difference in vertical travel between an 8 degree and 15 degree board is 1 and 11/16 inches (a little over 4 and a quarter centimeters for those keeping track).  That is the sort of thing that goes through my head when I’m sitting in staff meetings, and that is what is slowly making me insane.

But I digress.  I wanted to know how perceptible such a difference would be, and what impact it might have on my campus performance.  Is it all a wash, with the improved incut of a less-steep board compensating for the greater span?  Or would I suddenly burst through and set new personal bests on a slightly steeper board (heaven forbid I actually get worse).  I resolved to correct the error of my original construction, but to do so would required tearing up half the gym, so I had to wait for the off season.

Removing the interior panels to access the lower joist joints.

The board is mounted primarily to two 2×6 joists that connect to the main structure of the barn at the floor and ceiling.  The plan was to install a temporary hinge of sorts to the cieling joint, then disconnect the floor joint and “swing” the entire campus board structure up to the desired 15 degree angle.  Easier said than done.

The top of the board was relatively easy to get to, as I never finished installing the interior panel on the east side of the board.  I started by installing  3/8″ bolts in the joists and adjoining rafters at the top of the board to create the “hinge”.  The next step was to remove a seemingly endless series of interior panels to get access to the lower joist joints.  Apparently the entire interior is one long daisy chain, where Panel A can’t be removed without removing Panel B, Panel B can’t be removed without removing Panel C, and so on.  In the end I had to remove 10 interior panels, two exterior panels and miscellaneous trim pieces.  Each Panel averaged around 16 screws, not counting screw-on jibs which I thoughtfully installed right on the studs (meaning they had to be removed to free the panels).

“Hinge” Bolts installed at the top end of the joists.

Long story short, it was a huge pain, literally and figuratively as I tweaked my back trying to remove one particularly pesky stripped screw.  Eventually I got them all out and was able to swing the board into position with the help of several crow bars and three hammers.  I cut the joists to their new, much shorter length, bolted everything in place, and voila, “installation is the reverse of removal.”

Campus Board Angle After: I’m sure it was totally worth it!

The final step of this experiment was to test the new board and determine if the steeper angle had any effect on my campus ability.  This project was completed in late November, and as I described in this post, I set a new personal best on this board in January.  I’m not quite ready to give all the credit to the steeper board, but even after my first session on the steeper board it felt like things were a bit easier; I could latch my baseline max ladder more consistently than usual, and seemed like I was getting an extra inch or so of height on the biggest moves.  I also noticed it was a lot easier to press down with the lagging hand. I haven’t noticed any ill-effect of the steeper angle (such as the less-positive rungs making increasing the difficulty).  Long story short, I’m happy with the results and would recommend at least a 15 degree angle to anyone building a board from scratch.  I’m not sure its worth the effort to change the angle of an existing board, unless you’re close to doing 1-5-9 or something and need a bit of extra help 🙂 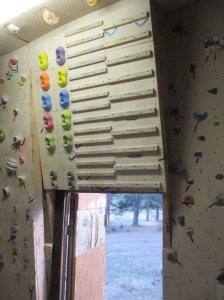 Campus board installed at the new and improved angle.