The family and I just got back from a great week in Lander. If you’ve never been, Lander is a throw-back; it’s a small community at the foot of the Wind River mountain range in Wyoming, so the pace of life is a little slower, and life is a bit simpler. When we’re in Lander, for whatever reason, there is no TV watching or any of those distractions. Instead, we’re outside a lot, and we spend time with great friends. On this trip we were fortunate to stay with Steve and Ellen Bechtel, and BJ and Emily Tilden. Thanks for the hospitality!

When we first arrived, I was in the midst of my Power phase, so I sought out powerful routes to supplement my training. That’s a big reason we were in Lander in the first place, to climb at the Wild Iris. I think there are only a few crags in the US that are suitable for honest-to-goodness training on rock, and Wild Iris is one of them, when it comes to Power (The Red is great for endurance training). Also, early in your season, it’s a great idea to get some easier (for you) routes under your belt to get the rust off, and build confidence going into more difficult projects. To that end, I picked out a couple 13+ routes to try to tick off quickly. The first was Adi-Goddang-Yos, a short, powerful 13c at Rising from the Planes wall, made famous in Eric Perlman’s epic film, Masters of Stone. A hold had broken since the filming, but the route had been re-climbed at least twice since then, at a slightly harder grade. It now requires a pull off a small crimp (my specialty 🙂 ), followed by a very powerful undercling move. I was fortunate to send on my second burn, and was able to play around on some harder routes for the future.

I was lucky to be the first person in the Western Hemisphere to try the super hot Tenaya Tarifa, an aggressive high performance shoe that will excel on steep terrain. It has a chiseled toe that is great for pockets. I also like that it is a lace up because I can get on a tighter fitting shoe and still get it on over my grotesquely oversized heels.

My next climbing day, I targeted White Buffalo, a short crimping test-piece on a 30 foot boulder in the campground. You probably remember Mark’s account of this route from last fall: Roped Bouldering in Cowboy Country

I had been intrigued by this line for years (as I’m sure everyone who’s ever camped at the Iris is too), and finally had the opportunity to try it with the right fitness and good weather. We got an 0500 start in Lander to ensure good conditions, and an opportunity to get a couple burns before the sun warmed the face too much (it gets morning sun).

The day before I had just watched BJ Tilden trying his latest sick project at Wolf Point (see below). It was incredibly inspiring. He hasn’t sent yet, but on that attempt you could tell he was really going for it 100% on every move, even though the moves were really risky, low-percentage dynos to small one and two-finger pockets. There were probably five separate occasions when the crowd was sure he was falling, but he hung on and kept moving! It was quite an example. 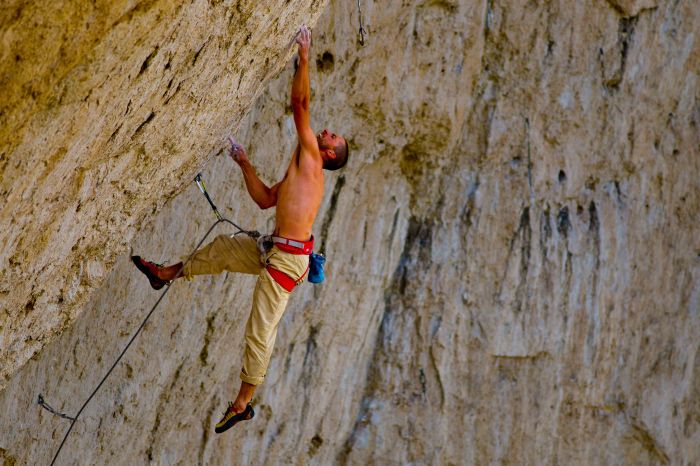 BJ Tilden on his super-sick Wolf Point project. This think might be 9a+!

I think we all aspire to “climb like Sharma”, really going for it on every move, no matter how desparate.  Sometimes we pull this off in the gym, but for whatever reason many of us seem to hold back when we’re on rock.  Perhaps its the sharpness of the rock, fear of incurring a skin injury (or a real injury), or just fear of falling or failing.  Further complicating this is that certain types of climbing, like long enduro routes or technical on sights, punish over-gripping, and so foster a “don’t try too hard” mentality that can be difficult to overcome when we switch climbing styles.  While the RCTM advocates a “Smarter, not Harder” approach, we all need to remember that often the great climbers are great because they really do try harder than everyone else.  Just trying hard in the moment of the redpoint will not make the difference between climbing 13d and 14d, but all the opportunities along the way, over many, many years, of trying just a little bit harder in the gym, on the campus board, every time you’re on the rock, can eventually add up to that difference.  While Mark and I are not always brawlers on the rock, we are in the gym, and we try extremely hard in training, day-in, day-out, which is one of the reasons we’ve had success with our training.  And though we aren’t at BJ’s level, when the moment is right, we are able to whip out some pretty concerted efforts on a rope every now and then (just yesterday I belayed Mark on the send of his newest Clear Creak 5.14, and it was pretty cool to see him dynoing five times in a row, between insecure holds, eight feet above the last bolt, especially since I was around in the early days when he was much more timid).

So, when I got to White Buffalo, which has some painful and powerful crimp moves, I channeled my inner-BJ…I wasn’t going to pace myself, just give 100% effort on every move, ignore the pain, or thoughts of failure and just try like hell! It worked, and I sent on my second go. It’s the first 13d-in-a-day I’ve done, and my first 2nd try. I’ve done a few in 3 tries, so this was a minor break through. More importantly, I had some confidence to head into some harder projects.

I’ll let my photos do most of the rest of the talking…. 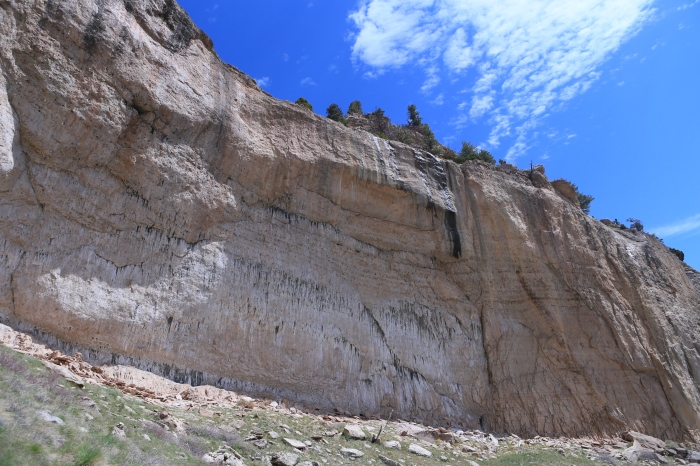 America’s latest Super-Crag, Wolf Point. This was my spring goal, that I had been dreaming of and training for for months. Finally made it!

I decided to try a beautiful 14a that BJ had put up called King Thing. It’s a commanding line, on a flawless sweep of limestone up the center of the cave. The moves are outstanding, without a stopper crux, but no opportunity to shake in the first 50 feet or so. You can watch BJ climbing it at about the 48 min point of this film, Wind and Rattlesnakes.

Steve Bechtel climbing on Remus, 13b.

One of the best parts of the trip was making a couple new friends. First was Rob Jensen, shown below. It turns out, I grew up about 45 minutes from him (he’s from Springfield, Oregon), and we lived in Colorado at similar times, yet I’d never met him. He is also another proud owner of an Ascent Rock mechanized climbing wall, so we had much to talk about. He is a pillar of the Las Vegas climbing community, and hosts numerous climbers in his “garage” for epic training sessions.

I also met and climbed with Kyle Vassilopous. He moved to Lander last year from Bozeman, MT, and he is super-psyched to put up new routes. He was a pleasure to climb with because he is extremely psyched, and didn’t balk at my desire to start early for good temps! 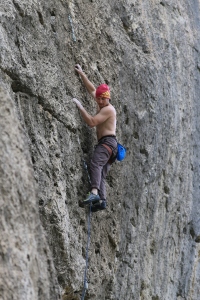 Dr Tom Rangitsch has been the driving force behind new route development in Lander the last few years. He’s hiked more cliffline than anyone in town and discovered lots of new crags. He put up many of the best routes at Wolf Point, including this new addition, Full Moon, 5.13b, a 40 meter pitch that overhangs about 6 meters over the length. It started as a 30 meter 12c called Bark at the Moon, and this is an extension to that route. The first anchor is at the first draw visible in the photo. In this picture, he’s at the crux of the extension which is a really cool sequence on small crimps. I was lucky to get to belay him on the FA, then he belayed me a couple days later when I tried it. I wanted to go for an on-sight, and Tom did a great job of biting his lip as I flubbed the beta…luckily I was able to recover, and made the first on-sight of the route. It’s a great route Tom, thanks for the hard work!!!

Thanks everyone for the hospitality, we’ll be back soon to finish off our projects!