This is Part 1 of a 3 part mini-series on Campus Training.  Check back for the rest of the story in the near future. 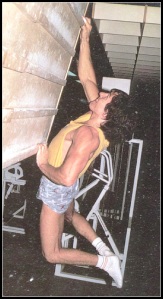 Gullich going big on the original Campus Board. Note how low his left hand is!

The legend of the original Campus Board is well-known and often re-told, not unlike the Epic tales of the ancient Greeks.  The incomparable Wolfgang Gullich installed the first board at a Nurnberg gym known as “The Campus Centre” to help elevate his finger strength to levels that could only be described as “futuristic”.  The board consists of a ladder of finger edges, and the training method is to move dynamically between these edges with feet dangling.

The concept behind the Campus Board is to apply methods of “Plyometric Training” in a manner that is specific to rock climbers.  Plyometrics have been around for a while, originally developed by Soviet Track & Field coaches in the 1960s to help train explosive power in their athletes.  Early plyometrics involved activities like jumping off a high surface, landing on a lower surface and immediately springing back up to the original height.  Theoretically the landing causes an involuntary eccentric contraction in the leg muscles which must be immediately converted to a concentric contraction in a very short period of time.  This type of training is still widely regarded as the best method for improving explosive power.  Gullich’s visionary adaptation of these concepts proved to be the key to his ground-breaking ascent of Action Directe in 1991, amazingly still one of the hardest routes in the world. 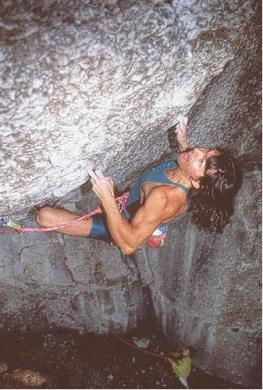 Considering that (simplistically speaking) Power equals Force divided by Time, there are two key reasons Plyometric Training is effective at developing explosive power.  While it helps increase muscle fiber recruitment (key to maximizing the force element of the equation), there are many ways to increase recruitment some of which are likely more effective.  What sets plyometrics apart is the dynamic aspect of the training, which helps train muscle fibers to contract more quickly, allowing us to generate high levels of force in short order.  The obvious application to climbers is to use plyometrics to improve “contact strength” (if you’re unclear on the definition, read this), the key to performing difficult dynamic climbing moves (and often the key to success on hard routes or boulder problems).

As with classic Plyometric training, the act of latching a difficult dynamic move entails a short period of eccentric contraction in the forearm muscles followed by an immediate concentric contraction to achieve the desired isometric grip position.

In addition to the pure strength benefits of Campus Training, this method is very helpful for improving the inter-muscular coordination required for good “accuracy” in dynamic movements.  The more you practice dynoing or campusing, the better your brain gets at aiming for holds. In a few sessions I can pretty quickly get to a point where I’m basically deadpointing every campus move, which makes the moves much easier. This accuracy translates directly to the rock, although on rock, every move is different, so your accuracy on an onsight will likely never be perfect, but it should improve over time.  The more you practice dynamic movements, the better your body & mind get at remembering those types of movements, meaning you should find yourself better able to “dial” dynamic moves on your projects over time. 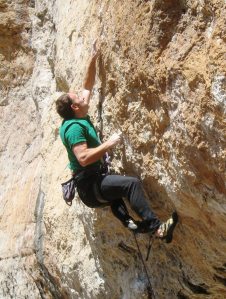 Consistent Campus Training will greatly improve your muscular coordination, key for moves requiring tremendous accuracy like this dyno to a mono pocket

Finally, its well known that some climbers just don’t do well on dynamic moves.  This could be due to a general lack of aggression or a strong desire to remain “in control” on the rock.  Campusing can work wonders with these issues.  By encouraging aggressive and committing movement in a low-risk environment, climbers can overcome years of overly static movement after only a handful of short campus sessions.

With all the many great things Campusing has to offer, its worth noting the downsides.  First, there is no doubt that campusing is much harder on the joints than other methods of recruitment training such as hangboarding.  Campusing is by its very nature somewhat wild and out of control.  With a hangboard you can dial-down the intensity at will, and let go the moment things get uncomfortable.  Often in campusing (or dynoing in general) the only sign of injury comes after its too late.  For that reason, its critical to minimize the amount of time dedicated to the Campus Board, and ensure that you are 100% injury free before beginning any campus activities.  Elbows are particularly at risk, but shoulders and fingers need to be healthy as well. 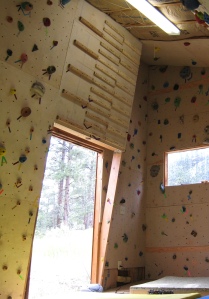 Hopefully your board looks something like this, or perhaps even better. From left to right the board has “Large”, “Small” and “Medium” rungs.

Now that you’re all psyched to get campusing, you just need get yourself a Campus Board.  Ideally you have a local gym with an acceptable board.  The board needs to be in good shape, with a large quantity of smooth “rungs” of uniform size and shape, spaced at short intervals (around 3-4″).  Many boards have way too few rungs.  The result is climbers quickly progress to whatever is near their limit, then its pretty much impossible to improve any further because the next increment of progression is too great.  The legendary Ben Moon has popularized the spacing of his board (22cm intervals), which is famous for the “1-5-9” ladder.  This spacing is way too big!  Someone like me can do 1-4-7 on Moon spacing, but I would have no prayer of doing 1-5-9.  So I would be forced to do something that is too easy to be at my limit.  Some day I may be able to do 1-5-9, but I won’t get there by repeatedly doing 1-4-7.

Another common problem is boards that mix different sizes and shapes of rungs on the same ladder.  This causes the same problem as a board with too few rungs.  The board should be ~15 degrees overhanging, and free-hanging to allow your feet and legs to swing around without dabbing on nearby walls.  If you don’t have access to a good campus board and you want to build your own, I highly recommend wooden Campus Rungs like these.  For some great tips on building your board, check out this guide.  You don’t necessarily need all three sizes of rungs–at this point I have no use for the Large rungs and only use the Medium rungs for warming up.  Finally, the rungs need to be numbered so that you can record and track your training.

Look for much more on how to get the most out of the Campus Board in the next few weeks….