I spent the latter half of October working a route in Clear Creek Canyon called “Primetime to Shine”.  This is a linkup of two popular Peter Beal 14a’s, “Primeval” and “Shine”.  I’m usually not a big fan of linkups but this one is a rare example of a linkup that actually improves on the piece parts.  The Primo Wall is fairly short (maybe 35 feet tall?) and the geometry is such that the ‘straight up’ lines are really only continuous for a little over half the height of the wall.  The ‘Primetime’ linkup traverses left and up through the middle of a steep shield of stone, keeping the line hard for a good 30 or so hand moves.  The result is one of the most continuous hard lines on the Front Range.

Most of “Primetime to Shine”  Photo: Jay Samuelson

The route is basically a classic power endurance sprint, so it made for a good objective to focus the efforts of my Power Endurance phase.  Lately I’ve been experimenting with different types of Interval training, besides the classic “4×4” method that I have extensive experience with.  I used a 32-move “route” for my intervals.  I did about one workout a week, which consisted of at least 4 laps (but as many as I could do without failing), starting with 4 minutes rest for the first workout.  A lap would take a little bit less than 2 minutes to climb, so the work to rest ratio started at about 1:2, with the goal of getting it down to 1:1 by reducing the rest interval by 30 seconds to a minute for each subsequent workout.  When I first set this route in the summer of 2010, I couldn’t send it once with several sessions of work.  Its very motivating to now see myself sending 5 or 6 times in a 20 minute period!

The rock on the Primo Wall is nearly flawless Gneiss, and the route climbs a variety of interesting features, starting with wicked hard crimping up a steepening prow to a series of desparate moves to reach a big sloping ledge.  At this point the climbing transitions from frantic crimping to desparate sloper moves as the line veers left, away form the Primeval finish.  Gymnastic slaps and heel hooks lead straight into the ‘Shine’ crux, which involves a combination of slopers and crimps to reach an odd pegmatite scoop that is best compared to a 2-finger pocket.  If you latch this hold you’re most likely going to send (eventually), but there are still another 10 or so pumpy sloper moves that dashed my redpoint effort more than once.

The campaign was a rollercoaster ride with a lot of ups and downs, and a good lesson in the perils of over-confidence.  The wall is tricky to hit in good conditions in the fall; ideally you would climb here in the dead of winter when cold temps would be guaranteed.  The wall is in the shade until around 10am or so, then bakes in the sun until 4pm.  We bounced back and forth between morning and evening climbing sessions which made it hard to find a good rhythm.   The evening sessions were agonizing because I had to sit around the house all day trying to “save” myself for the evening climbing.  The morning sessions were a complete waste; either the rock was bitterly cold and I would numb out, or I would fail to get a sufficient warmup and get shutdown on the powerful starting moves.

I one-hanged the route pretty early on, which lead to the ill-advised “next try” mentallity.  Thinking I would surely send “next try”, I put less and less time into each burn, in order to “save” my skin/strength/etc for the next try.  In my experience this is the ticket to a long, protracted and frustrating series of fruitless burns.  The silly part was that I was well aware of what I was doing, but still so confident that I figured it was worth the gamble.  It wasn’t!

But some lessons are so helpful they’re worth learning several times.  Near the end of October we got the first real snow storm on the Front Range, which brought nice cold temps along with 6″ or so of snow.  The conditions made it possible to climb mid-day which was just what I needed.  For some reason trekking to the crag through snow drifts seems to bring out the best in me.  Perhaps its the solitude that comes with such situations, but I think its simply the cold stone. 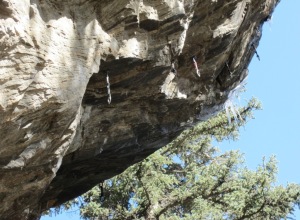 Icicles over Primeval. The wet pinch appears to be about a foot directly below the lowest quickdraw.

When we arrived I was disheartened to see big icicles coming off the top of Primeval.  The wall is so steep it hadn’t really occured to me that seapage might be a problem.  The route looked pretty much dry, except for a right hand pinch that sets up the dyno to the big sloping ledge at the end of the Primeval crux, and the last 2 or 3 holds below the chains.  I always figure when redpointing its worth a try no matter the conditions, but I had pretty low expectations.  The dyno had shut me down on a number of attempts so I couldn’t really see sticking it with a wet hand.

The rock was crisp but not overly-frigid.  I flowed through the opening sequence with relative ease.  After a risky and strenuous clip the right hand moves to an awkward spike, then a big high step and left hand to a small, sharp crimp.  Perch on the righ foot, suck in the hips and then slap the right to the wet pinch.  I could feel the water but my hand stuck.  Fortunately I’ve dialed this dyno to the point that its virtually static; the key is to keep the feet from cutting loose in order to control the swing…stuck.  Dry my hand and shake.  Wetness is no longer  an issue but the hand is much colder than usual from the water.  This is one of those rests that isn’t really that restful, and you wonder if you would be better off sprinting.  At only around 10 moves in, you aren’t pumped, just numb.  I stay long enough to get most of the feeling back in my hands and press on linking intermittent rails.

A newly discovered foothold makes a once-desparate slap trivial, and on to the Shine crux.  This part always feels desparate but if you just keep motoring and ignore the insecurity you won’t fall.  Match the sloper rail, left foot way high, rock up and reach high to the pocket.  Gaston with the right, then dyno for the “jug”.  This time I’m not pumped.  Clip the bolt, chalk up, and finally appreciate how peaceful this canyon can be on a secluded snowy day.  The second-to-last hold is wet but incut, leading to a blind slap to a jug over the lip; probably wet–hopefully not filled with snow or worse, ice.  I consider clipping from the lower crimp, but after a slight hesitation I go for the jug.  I’ve never been so relieved to find a hold full of water!

3 thoughts on “Passing the Time”