On rare occasions I take a short hiatus from thinking about training, writing about training, and training, to actually go rock climbing.  Over the New Year’s Holiday the family and I headed west to the warm climes of St. George, Utah for a week of climbing.  St George is home to a vast array of rock climbing possibilities, from the Grade VI Big Wall free and Aid climbs of Zion, to the bouldering of Moe’s Valley, and everything in between.  The guidebook lists more than 40 distinct crags, and the area hosts a wide variety of different rock types, including sculpted sandstone, basalt, Volcanic tuff, conglomerate, and some of the best limestone in the US. 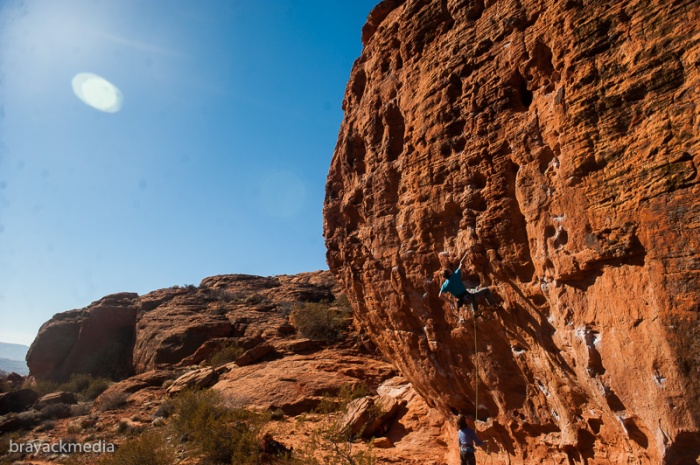 Sunny steep stone in the capital of Utah’s Dixie.   Fencing with Tortuga, 5.12a, at The Turtle Wall.  Photo Dan Brayack.

My primary objective for the trip was a power endurance route called “Breakin’ the Law“, which climbs out the upper of two shallow limestone caves at the Black & Tan crag.  The route was the vision of Salt Lake hardman and fellow training advocate Jeff Pedersen.  However, a young Dave Graham nabbed the first free ascent, and the name is reminiscent of the confessionary “I Am a Bad Man” (now known simply as Badman), so-named by JB Tribout after his friend Alan Watts told him, ‘you can have any route [at Smith Rock] except that one’.

The Black and Tan Wall. Breakin’ the Law climbs out the subtle dihedral in the left side of the higher cave.

The route begins with big moves up a steep wall to reach the roof of the cave.  The crux is climbing out to the lip of the cave, then turning the lip to get established on the headwall. It would be quite a challenge for me to send a .14b in a week, but I’d heard from various accounts that the line was soft.  However, just before we set out for Utah I talked with a prominent, much-stronger-than-me climber, who assured me the route was quite hard for shorter folks.  Apparently tall climbers can get a big stem/dropknee that essentially eliminates the first, harder crux.  So as we left Colorado I was apprehensive and anxious to find out for myself.

Breakin’ the Law: Midway through the first crux, a difficult traverse to the lip of the cave. Photo Dan Brayack.

We planned to split up the long drive with a break in Grand Junction for lunch and a hike out to Independence Monument.  I avoid aerobic exercise when I’m in performance climbing mode, but I like to go on “brisk walks” at least every rest day.  It helps keep my metabolism humming (for the purpose of weight management), and it allows an opportunity to clear my head.  The trail was snowy and muddy in places, but it was still a fun hike.  I’ve climbed Otto’s Route at least three times that I can remember, and I suspect I’ll climb it again with Logan some time in the next decade.

Logan and I on the hike to Independence Monument, outside Grand Junction, CO.

We spent the night in a flea-bag motel in fabulous Salina, Utah, then continued toward St. George the next day, making a beeline for Black & Tan.  We met my friends Dan Brayack and Lena Moinova at the crag, who happened to be on vacation as well.  Dan is a fellow Trango team-mate, and an outstanding climbing photographer.  A hefty chunk of the photos in The Rock Climber’s Training Manual were generously provided by Dan. Some of Dan’s images are peppered throughout this post, or you can check out his amazing gallery here.

After warming up , I got on my presumed project.  The climbing starts out with fun, huge spans between large holds.  There’s a big jug at the crook of the roof, then the first crux comes traversing from that jug to the lip of the cave.  You can either shuffle or cross between several holds, but you end up with a good incut crimp and a tufa pinch.  Depending on your sequence you can either dyno into a big iron cross, and then struggle to climb out of it, or you can make a wild lunge to a flat edge at the lip.  I think this is where the drop knee would be used if you were tall enough, allowing either sequence to go statically.  Since I was not able to use the dropknee, I tried the two alternatives and settled on the Iron Cross solution.

Struggling to climb out of the Iron Cross on Breakin’ the Law. Photo Dan Brayack

Once at the lip, a really hard crank off a thin, sharp crimp gets you onto the slab.  I struggled quite a bit with this move, perhaps because I was tired from working the lower crux.  I figured this would end up being the redpoint crux but I was too exhausted to really work it.  I moved on to the headwall, which was mostly fun, technical face climbing, but hosted one sinister move in which you have to high-step your right foot onto a polished block that slopes away at a 45-degree angle.  There is a faint bit of patina on this block that allows you to toe-in a bit, which is key since you next have to reach for an over-head undercling, using this dire foothold to push against. 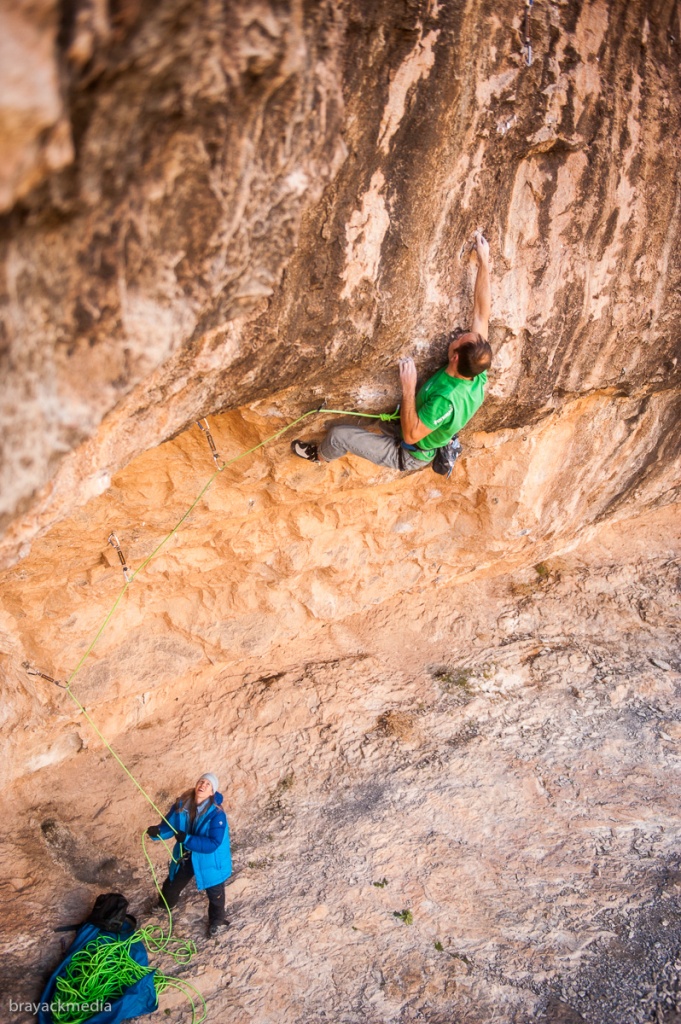 At the end of the day I had all the moves worked out.  Typically if I can do all the moves, I can send, but I had no idea if the moves would come together in the four climbing days remaining. The second crux requires a pretty hard crank after a long series of hard moves, and that is something I struggle with.

“Rest Day” hike to the West Rim of Zion Canyon.

The limestone surrounding St. George is much more monolithic than the stone at most US limestone crags.  That means it’s not very featured, and generally quite sharp.  There are the odd pockets, but most of the climbing is on small edges.  The result is that the climbing tends to be less steep at any given grade than you might encounter at other, more featured limestone crags like Rifle, or the Wyoming crags.  This is great for technicians like me, and these crags really shine in the 5.12+ and up range.  Below that, the climbing often isn’t all that fun; it’s certainly not the type of climbing you want to do on vacation.  Fortunately St George is all about variety, and there really is something for everyone.

Jumanji is one of the better limestone 5.12a’s in the area. It’s a fine route, but its sharp, polished, and so not particularly fun by holiday standards. Photo Dan Brayack.

With this in mind, we opted to experiment with some different warmup crags over the next few days.  The notorious Chuckwalla Wall is often derided by serious climbers, but I really enjoy climbing there.  It’s by no means a wilderness setting, but the routes are just plain fun, and the approach takes about 90 seconds, which is key for climbers with kids.  The cliff is stacked with 30+ classic sandstone jug hauls from 5.9 to 5.12, and they make for great warmups and fun all around.  For the next two crag days we started at Chuckwalla, then after my last warmup we hopped in the car and raced down Highway 91 to Black & Tan, slightly frantic to get on my project before my warmup had faded (note: it took us about 50 minutes to get from crag to crag, approaches included; this turned out to be quick enough that I never lost my warmup.) 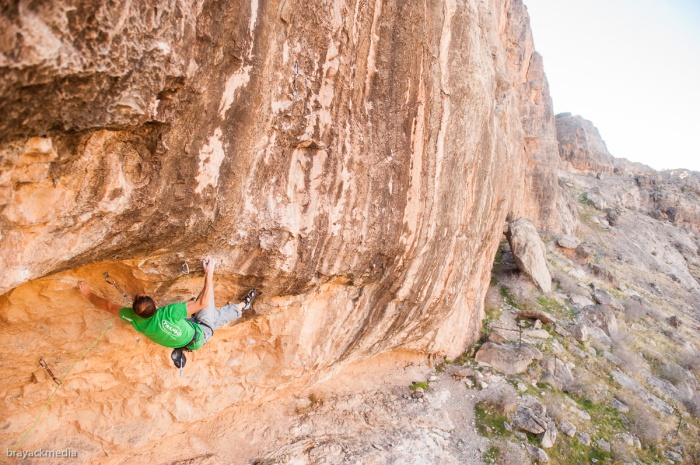 I made good progress on the second day, primarily refining my foot sequences, and rehearsing the big dyno into the Iron Cross at the lip.  I was able to do the crank onto the headwall much more consistently, and on my second go I managed a 1-hang, which is always a nice milestone, but certainly no guarantee of future success.  We celebrated New Year’s Eve by watching Logan’s Strawberry Shortcake DVD 4 or 5 times in a row and hitting the sack at 11pm.

Spotting Logan while hiking near the Chuckwalla Wall on New Year’s Day.

On our third climbing day we revisited Chuckwalla, then hightailed it to Black & Tan.  My last warmup route felt really soft; either that or I was just feeling really strong.  We got the kids situated (i.e., turned on the Ipad), rigged the rope, and I started up.  Often I have a tendency to sprint on short power endurance climbs like this.  Each of the crux sections involve careful foot placements and subtle pressing to stay on the wall.  Perhaps since I didn’t know the moves super well, I took my time and made sure I did every move correctly, following Alex Lowe’s adage to ‘never move up on a bad [ice tool] placement’.  I expected to pump out at any moment, but I just kept motoring, going from one move to the next until I was on the headwall.  After a nice long shake I hiked up the headwall to the chains.

Logan and me at Black & Tan.

The total effort took 5 burns over three days.  I think the route is comparable in difficulty to Mission Overdrive in Clear Creek (which took me 6 goes over 3 days), which is to say its a hard 14a or easy 14b, without the stem/dropknee.  I’m inclined to go with b 🙂  I’ve been crushing the campus board lately and I believe my power has reached a new level.  Occasionally periodization doesn’t work out quite like you hope, but this time I think the timing of my fitness was perfect for the characteristics of Breakin’ the Law.

To celebrate, we headed to Kelly’s Rock (named for my old friend Kelly Oldrid) and climbed “K-8”, ‘one of the best 5.11s in Utah’, according to the guidebook.  The climb includes two exciting roof pulls and some of the most amazing jugs I’ve ever seen.  Certainly a worthy line and easily the best limestone 5.11 I climbed that week.

Tune in next week for Sunny St. George Part II!

Celebratory Double Meat with Everything (hold the cheese), add whole grilled onion and chili peppers, from In N’ Out Burger. Definitely not on the diet plan but well worth it.

Logan stoked at In N’ Out. His new favorite food is Chocolate Milk Shakes.

9 thoughts on “Sunny St. George Part I: Breakin’ The Law”