Nearing the top of Vole, 7b, at the French Limestone crag of Venasque. Photo Logan Anderson.

Venasque is a little known crag outside the village of the same name, about an hour south of Buis. We first went there on one of my rest days, to give Kate a chance to climb some of the highly recommended 5.10s and 11s. Kate really enjoyed the climbing, and it looked so fun that we both agreed we should return for our last day in France.

Kate cruising Beaucoup de Bruit Pour Rien (“A Lot of Noise for Nothing”), 6a+, on our first day at Venasque.

The cliffs of Venasque don’t look remarkable (relative to other crags of the area). There are no tufas, the colors are bland relative to the orange and blue streaks of St Leger and Baume Rousse, and the scenery isn’t particularly special. But man, the climbing sure is fun! The rock is limestone, but it seems to have quite a bit of sandstone mixed in, and it’s weathered in a manner very similar to the best routes at Kentucky’s Red River Gorge. We spent most of our time at “Place de l’Ascle,” the main feature of which is a 30m wall, overhanging up to about 20 degrees, and covered in huge jugs. All the routes on this wall were spectacular 5.12 pumpfests. The routes aren’t particularly striking or cerebral, but it was definitely the most fun I had climbing on our trip.

Kate starting up Petite Marie, a gobsmacking 5.11c that charges up the right side of a towering swell of overhanging jugs.  5.11 sport climbs don’t get any better than this.

Higher on Petite Marie. Note the leaning wave of rock to Kate’s left—home to Misanthropies Therapeutiques, Aller Plus Haute, and Vole.

I started by warming up on a brilliant 7b on this wall called Misanthropies Therapeutiques, which was completely stellar, getting gently steeper, with equally growing holds, as you ascend (all the routes on this wall were like that).  It was one of the most fun sport climbs I’ve ever done. Next we moved to another sector along the same cliffband which the Rockfax guide described as a “must see wall that is the epitome of a sport crag and a must climb venue.” This cliff overhangs about 20 degrees, with a number of pockety, sequential lines from 7c-8b. I tried a route called Objectif Puree, or “Pure Objective.” This name was apparently ironic, as I soon discovered about half the handholds on the route were chipped. It was a drag, and really turned me off on the wall. I felt like I was climbing in a gym with poor route-setting. It was also rather disappointing that some people think chipped garbage is “the epitome of a sport crag.” Whether that’s a reflection on the author’s taste, or the reputation of sport climbing (or both), I don’t know. Nor am I sure which would be worse. To me it seemed like a real waste of a cliff, not to mention a waste of a climbing day in Europe. 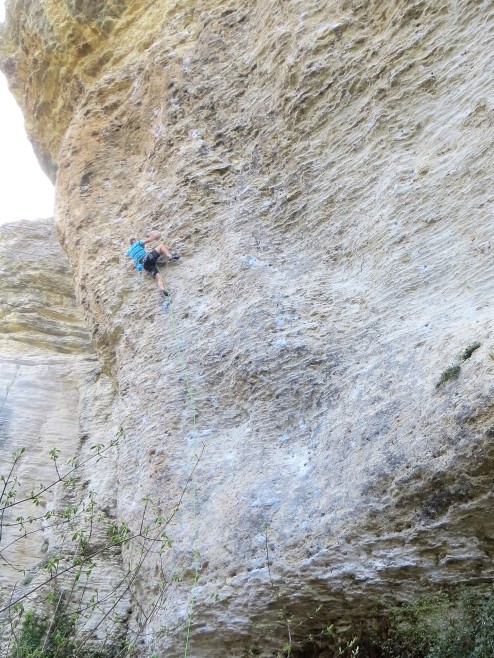 The upside of this revelation was that I was free to return to the first cliff and climb as many of the rad jughauls as my family could tolerate (fortunately it was also another great place to rig a rope swing, which got me at least one extra route beyond the usual quota). 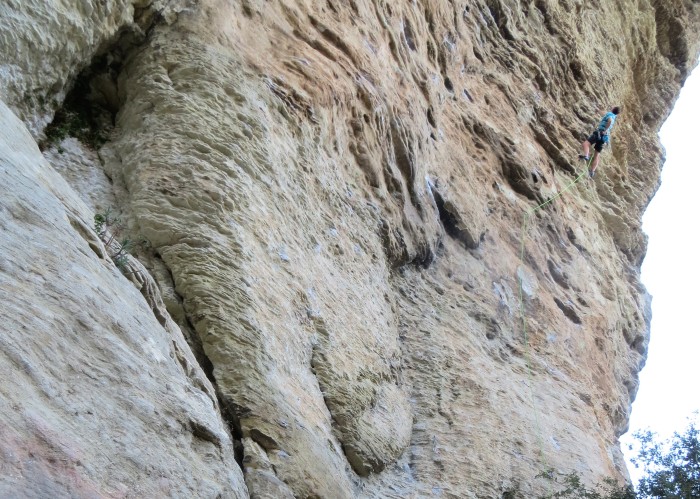 Midway up Vole, 7b. Misanthropies Therapeutiques is the next route left (following the flake system), and Aller Plus Haute is the second route left. Photo Logan Anderson.

The most memorable moment of the day came as I was cleaning the 7b+ Aller Plus Haute (“Go High”). The crag is right over the road, at the intersection of a very popular hiking trail.  A crowd of about 30 hikers came through, pausing briefly to watch my acrobatics as I neared the bottom quickdraw. When I cleaned this last draw on the steeply overhanging wall, I predictably swung way out over the road, greeted by a chorus of “oohs” and “aahs” from the gathered spectators.

Logan getting in on the fun.

All told it was easily my favorite day of climbing on the trip. The crag doesn’t look spectacular, it’s not photogenic or historic, but it’s hard not to have fun on these amazing cliffs. It was a great hang for the kids, with no approach, and nestled in one of the most scenic rural regions of Provence.  It’s the perfect family vacation crag.

Castle of the Day – Entrevaux. This one was so spectacular it gets two pics….

Logan had a great time playing with the two cannons at lower right. Note also the Citadel high above, and the zig-zagging path that climbs up to it.

One thought on “Climbing in France – Venasque”