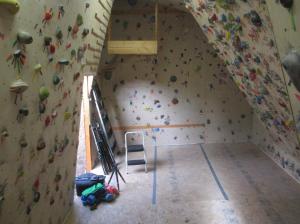 The Lazy H, all cleaned up with a temporary hangboard mounting structure installed.

Last week the Lazy H Barn was the star of its own film.  A big part of launching the Rock Prodigy Training Center is creating a few short videos about the board (describing the key features of the board, how to install it, and how to use it), and Trango decided to use the Lazy H for the shoot location. She was very excited, so I spent some time getting her in tip top shape for the camera.

Adjusting the lights and positioning the camera crane to shoot the RPTC.

Trango pulled out all the stops for the shoot, sending out Ben Fullerton and Travis Ramos to direct and film the videos.  These guys were super-professional; I was totally blown away.  They had all sorts of fancy equipment, including boom mics, camera cranes, adjustable light stands and this thing they called a “slider” to get super-smooth panning closeups.  They even had a “slate” for marking down the scene and take (with a clacking hinge for shouting “action!”). This was easily the highlight of the day for Adam (that, and trying to find a restaurant that would deliver to the middle of nowhere). 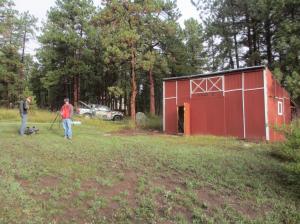 Ben (L) and Adam Sanders (Trango Product Manager and RPTC Brainchild) prepping the first shot of me walking into the barn.

It was really interesting seeing the ‘behind-the-scenes’ of modern climbing film-making. You have no idea how much work goes into making a really professional film until you participate in the process.  We shot for 8 hours straight, and the end product will probably be around 5-7 minutes of video. Ben and Travis did a great job of arranging the shots and coaching me on my acting skills. I got my first taste of what to expect on the first shot of the day, a straightforward shot of me walking in to the barn.  We did 5 takes of this, varying my pace, what I was looking at, and even how I opened the door, until I got it right.  I had no idea I was such a bad walker–it takes practice to nail the perfect pimplimp 🙂  Keep that in mind the next time you’re watching a climbing film with a shot of climbers casually strolling to the crag.

The whole experience was a blast, with lots of goofing around.  A hot topic was what I should be doing with my hands during the narration, and we kept joking about the scene in Talladega Nights when Ricky Bobby is being interviewed for the first time and keeps lifting his hands up by his ears.

The narration was fun but exhausting.  I was expecting to do voice over, as opposed to on-camera narration, so I didn’t have any of the lines memorized. The script was extremely wordy, with phrases like, “A good selection for an intermediate climber might include the Warmup Jug, Large Open-Hand Edge, Deep 2-Finger Pocket, Small Semi-Closed Edge, Shallow 3-Finger pocket, Wide Pinch, and a Sloper.”  Everybody was extremely patient as I fumbled the lines over and over again. 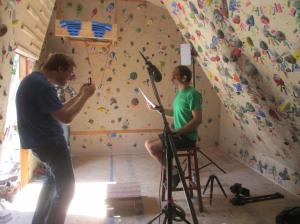 Reading the voice-over. This part was a breeze, and apparently the Lazy H has stellar acoustics.

Once the on-screen narration was filmed, I did a straight voice-over read of each script.  This will be used to lay over the action shots.  This part was much easier because I could simply read the script.  Also there was no need to re-load the camera memory cards, so this process went really quickly.

With all the sound captured, we got to do the fun part, filming the ation.  This part was much easier, but we still had to do certain steps numerous times to get different camera angles and so forth.

Travis manning the slider while Ben gets the wide shot.

I was amazed by how much work it was to set up a single shot.  Lights had to be moved around, then constantly tuned (in terms of position and brightness) to get the right look.  Sometimes it might take 30 minutes to set up for 2 minutes of filming (of which only 10 seconds will make the final cut).  At the end of the day, I was blown away by the professionalism of the people involved.  They did an amazing job and I can’t wait to see the final product; I’m sure its going to be stellar. [Ed. Note: The final videos can be viewed here.]

Finally, this was my first opportunity to try out the production version of the Rock Prodigy Training Center. It’s literally a pleasure to hang from.  I’m almost tempted to cut short my season so I can start hangboarding again as soon as possible 🙂 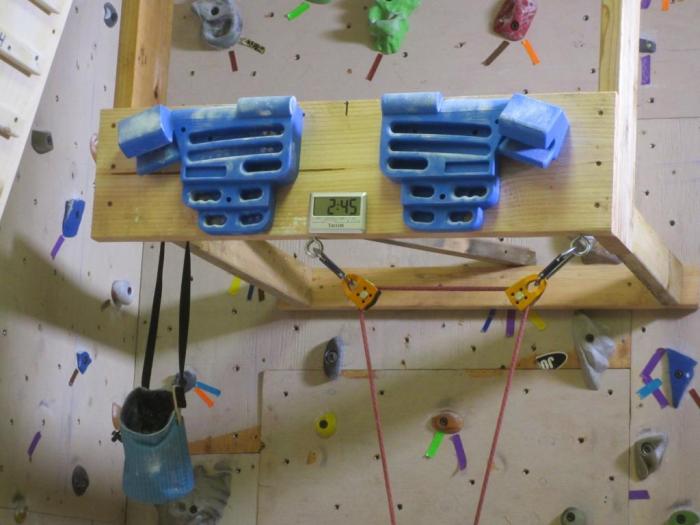 The RPTC ready for action.

One thought on “That’s a Wrap!”