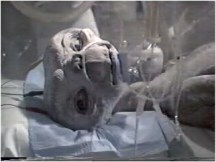 Forunately there’s no money in climbing training research, or else this might be me 🙂

I think if people realized how little I train (and climb) they would be shocked.  I often joke with my wife that I should be quarranteened in a plastic bubble and studied by teams of cruel government scientists (ala E.T.). There is certainly a trend among top climbers to perform massive quantities of training (like, 6+ hours per day, 5 or 6 days per week).  That’s not me.  First of all, I don’t have that much time, between work and my family. Second (and foremost), I truly believe “less is more” when it comes to climbing training. Even if I had more time to train, I would probably spend much of that time resting anyway. Considering those factors, my overarching strategy is to train as efficiently as possible.  That is, I strive to maximize my improvement relative to the training time (and energy) invested.  Doesn’t everybody do that you ask?  No, frankly.  Many people figure ‘the way to improve is to pile on more and more training.  Anyway, it couldn’t hurt, could it?’ This philosophy is popular among runners, cyclists, swimmers and other ultra-endura athletes. The problem is, it actually can, and does hurt.  Low efficiency activities sap energy, thus undermining high efficiency activities.  In the best case scenario, the added volume forces longer recovery periods between workouts, but far more often, the needed additional rest is omitted, and the athlete simply goes into the next workout under-recovered, thus further limiting the intensity of the next workout.  As a result, every workout starts to become an endurance workout, and pretty soon the athlete is no longer progressing, but rather struggling to maintain the fitness he had when he started. My strategy for maximizing training efficiency dovetails nicely wtih a complimentary training objective — favoring strength and power training over endurance.  This allows me to emphasize high intensity training, which is short in duration, almost by definition (there are brief periods during each season that I focus on endurance training, but even then I favor higher intensity endurance training followed by plenty of rest).  Furthermore, I only perform activities that I strongly believe provide a direct benifit to my performance; I don’t do any filler or “crosstraining”. [More on Training Intensity here] 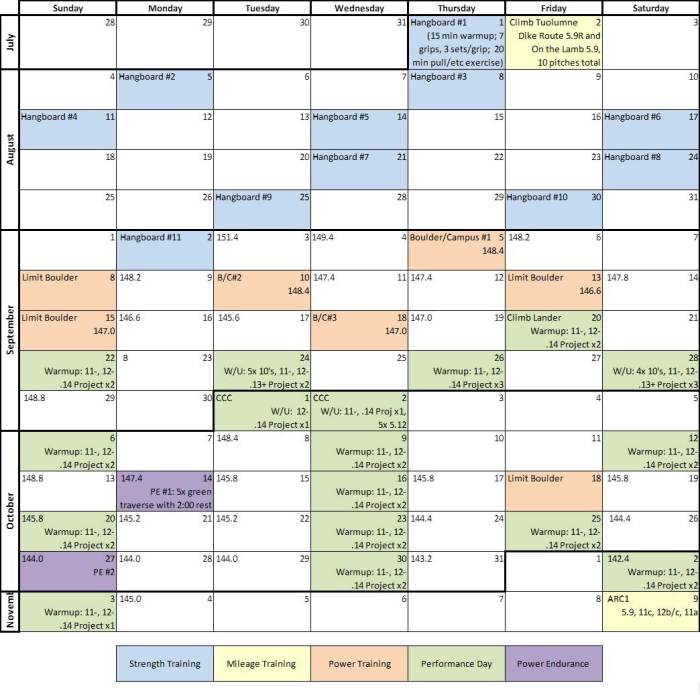 My actual training/climbing schedule from the Fall 2013 Season. The Strength & Power Training Phases are very typical of a normal season. However, the Performance Phase (outdoor climbing) is rather unusual; I’m rarely able to squeeze in more than 10 days of outdoor climbing in a season. I was able to wranlge about five extra days out of Kate’s Maternity Leave and the Government Shutdown.

This is perhaps easier to visualize on a macro-scale, but it also applies on a micro-scale.  For example, Strength Training revolves around my fingers, because they are the single most important factor in climbing performance.  I work my fingers first, but not for long.  When the intensity is right (really high), my fingers can only handle about an hour of work (or, about 18 ~60 second sets of deadhang repetitions, with 3 minutes rest between sets).  Once my fingers are worked, I perform a modest amount of pull muscle, upper arm, and shoulder exercises.  During my Limit Bouldering routine, I don’t do “fun” boulder problems.  I only do boulder problems that will make me a better rock climber (as opposed to a better plastic climber).  In other words, the Lazy H has very few pinches or slopers, and the walls aren’t super steep.  It has a lot of sharp crimps, tweaky pockets, and small, greasy footholds.  Very few of these holds are oriented horizontally–my problems require core tension and attention to footwork.  It’s often hard to breath while climbing these problems, and my skin takes a fair bit of abuse, but the skill and strength developed translates directly to the rock.

Warming up in the Lazy H isn’t “fun”, but its good for my footwork.

That said, it’s only fair to note that I have pretty good technique, and that took many years to cultivate.  Now that I have it, it doesn’t take much to maintain.  However, my training terrain is deliberately designed to maintain my technique (in other words, it isn’t “fun” terrain).  My warmup time is split between a dead vertical wall, and one that overhangs a modest 8 degrees.  The holds on these walls are tiny, and precise movement is required to stay on the wall. Those with performance-limiting technique can apply these same concepts to skill develipment by training on realistic terrain, and emphasizing focused, quality skill practice over zombie-like monotonous quantity.