Performance-oriented climbers often ask me what to do with their time when facing a month or more of unsuitable outdoor climbing conditions. A good example is the climber who lives in the northeastern US and can’t climb through the dead of winter due to snowpack or extreme cold. On the other end of the spectrum, the summer heat stymies many in the southern part of the continent.

My standard disclaimer is that it’s personal: it really depends on your near-term and long-term goals, and your current level of motivation. If you’re psyched to train, you really want to eke every last bit of performance out of your body, and you’re willing to sacrifice other aspects of your life to do so, then the best bet is to complete a Bridge Cycle. This is a truncated version of a typical Rock Prodigy training cycle, tailored to span the gap between full-blown training cycles.

A Bridge Cycle could be as short as a month, or as long as several months. The distinctive element is that it essentially skips the Performance Phase, or at least minimizes its importance to the extent that any outdoor climbing is an afterthought, rather than the primary focus of the cycle. For example, let’s say it’s June and you have a big project looming for the fall. You’ve determined that in order to peak during optimal sending conditions in early November, you should begin your full fall cycle in mid-August. But what to do in the mean time? 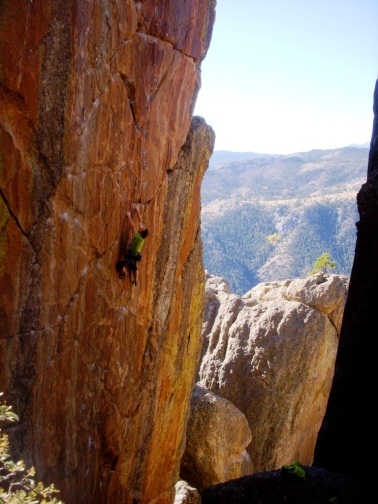 Over the summer of 2011 I trained as usual and focused on working Grand Ol’ Opry, located in a relatively cool, shady alcove at nearly 8000-feet.

If you’re like me, you might benefit the most from a break from climbing. I like to climb in cold weather, and it’s generally “too hot” for my taste in the summer. My strategy for bridging between the spring and fall seasons varies from year to year. Some years I select a relatively cool goal route, go all out as usual to train for it, and then “suffer” through the sub-optimal redpoint conditions. Some years I stop climbing completely, ride my bike instead, and focus on family and house projects. I find a long layoff helps stoke the flames of motivation for my next training cycle. Of course, I have a lot of miles under my belt, and even after an extended break I seem to be able to pick up right where I left off—physically, technically and mentally (after completing a full training cycle). Other climbers find an extended layoff makes them “rusty”, and the sabbatical negatively impacts their next full season.

A low key summer season allows me to catch up on house work and spend more time with my kids. These two goals converged in early June, when I built this climbing wall for my kids. [more details on that project to come]

This year I’m using a combination of several approaches. I began with a full bore spring season, which included working and sending several hard projects. Rather than ending the season when my peak ended (around the end of May), I’m continuing to climb easier and easier objectives as my fitness fades. I also started riding my bike and began some serious house projects around the 1st of June. I will stop climbing in the middle of July, for a full two weeks of straight rest, and then resume training around August 1st for my fall season.

For me, summer is a great time for developing new routes like The Smear Hunter, 5.13c, at The Bunker. During prime seasons I’m very focused on my projects and refrain from anything that interferes, like the often strenuous work of searching for, cleaning and bolting new routes. During summers like this one, my goals are modest enough that I can afford to divert more energy towards route development.

There are many situations where an extended break doesn’t make sense and you would be better off with some form of training.   Perhaps you are new to climbing and should keep your nose to the grindstone. Perhaps experience shows you’re best off maintaining momentum from one season to the next. Perhaps you are just plain psyched on training, there’s nothing you would rather do, and you can’t stand the thought of wasting an opportunity to get better.

How you spend the training phases will depend on your goals, strengths, and weaknesses. If you have any glaring weaknesses, they should be your first priority. A bridge cycle provides a fantastic opportunity to focus completely on addressing weaknesses because you have no specific near-term goal that demands attention. For example, if you find you struggle with a particular type of move—say, pulling the lip of a roof—you can spend this time training the physical, technical and mental aspects of these moves, including seeking out sub-limit routes to practice on.

When I’m super fit I’m reluctant to visit unknown crags for fear of “wasting” a precious day of peak fitness. On the other hand, laid-back summer seasons allow me to explore new areas like Dumont, CO’s “Mill Creek Crag” where I made the First Free Ascent of the scenic Lou Reed, 5.13b.

Next consider the relative importance of any short and long term goals. Going back to the original example, let’s say your fall goal route is long and pumpy, but the individual moves are well within your ability. You may want to design your bridge cycle to improve your redpoint endurance, and so emphasize Base Fitness and Power Endurance training. Perhaps your fall goal route is short and bouldery, in which case emphasizing Strength and Power is the way to go.

For many, the near-term goal route is less significant than the desire for long term improvement. This could be because you haven’t identified a fall goal route yet, you have many goals for the fall that span the gamut of climbing styles (so focusing on one climbing style takes a backseat to general improvement), or maybe you’re “all-in” on the Time Value of Climbing Ability. If any of these apply to you, and you have no glaring weaknesses (dare to dream), I recommend focusing on Strength and Power, since these are the most difficult to attain and will benefit every aspect of your climbing.

An example of a Bridge Cycle emphasizing Strength and Power is shown below. It includes a few Base Fitness workouts to get you ready for hangboard training, a relatively full Strength Phase, and a brief Power Phase so you can realize a short payoff from your training (in the form of a few sessions of Limit Bouldering–these can be done indoors or out). It clearly favors strength over power for a number of reasons (it’s more basic, more universal, more cumulative and easier to train, to name a few).  If you have more time to work with, expand the Strength Phase, then Power Phase, then Base Fitness Phase accordingly.  For most the PE Phase would be the last priority since there is no Performance Phase planned. 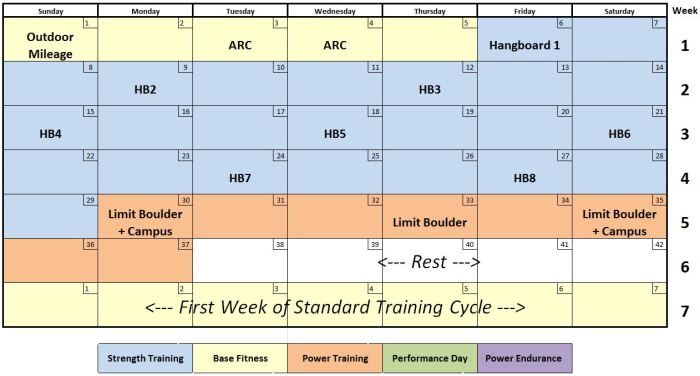 For some great discussions and first-hand experience with planning Bridge Cycles, check out these threads on the RCTM Forum (more or less in order of relevance):

Finally, if you do find yourself training in the mid-summer heat, you might benefit from some of these tips.  Good luck and happy training–fall is just around the corner!

One thought on “Bridge Cycle for Summer Training”