When we planned the Maui trip, I assumed it would be my climbing off-season, and I would be content to spend a week laying around in the sand and sipping mai tais. Silly me. Various factors contributed to me being smack in the middle of a particularly productive hangboard phase when we departed Denver, so I was desperate to get some type of climbing in during the vacation.

If anything, the Hawaiian Islands are known for their lack of climbing. However, Maui has, by far, the best climbing opportunities, thanks to prolific author and former Rock & Ice editor (and current Editor-at-Large) Jeff Jackson. Jeff moved to Maui a few years ago and has been scouring the island for climbing potential ever since. You will rarely encounter a more dedicated lifer than Jeff. He eats, sleeps and breathes climbing. His positivity and drive fuels the stoked and resilient Maui climbing community and I felt incredibly fortunate to climb with him.

Climbing in Hawai’i? It’s even better than it looks! Photo Jeff Jackson.

After a morning of snorkeling that included close-up encounters with a reef shark and several sea turtles, I joined Jeff and his buddy “Coco” Dave for an afternoon of climbing. We hopped in Dave’s pickup for a bouncy, twisting, white-knuckle drive on one of Maui’s many under-developed highways. I was never quite able to extract the latch for my seatbelt, and spent most of the drive wondering if the next corner was the one that would send me through the windshield. The scenery was gob smacking as usual, and before I knew it we were on the trail.

The hike flew by as Jeff excitedly pointed out various boulder problems and aped crux sequences. The narrow canyon was lined with bullet basalt and stacked with Jeff’s inventive problems, from obvious classics on free-standing blocks, to hundred-foot traverses and even a 30-foot roof crack. A raucous heard of feral mountain goats observed our march from above, and provided questionable entertainment throughout the evening, complete with loud farting noises and a high-speed demonstration of their procreation methods.

The cave itself is a basalt/lava rock* version of the Arsenal at Rifle, with big tiered, stair-stepped roofs and corners (*Wikipedia tells me that 90% of the Earth’s “volcanic rock” is technically basalt, so I’m assuming all the black rock you see on Maui is basalt. That said, calling it “basalt” is a bit misleading since it feels and climb so much different from most mainland US basalt). The climbing is quite steep, physical, long and pumpy, with many burly undercling moves and long reaches or throws to generally big holds, often split with strenuous rests. The rock was incredibly solid and formed a wide array of novel shapes. Typically lava rock comes in two flavors: Razor Sharp and Just-Go-Ahead-and-Order-the-Blood-Transfusion-Now. For whatever reason, the rock here was far more—well, I’m not gonna say “skin-friendly,” so let’s just go with “climbable”—than typical lava. There was the odd spiky hold, but for the most part the rock was smooth-but-featured, and I didn’t get any flappers or cuts the entire trip. 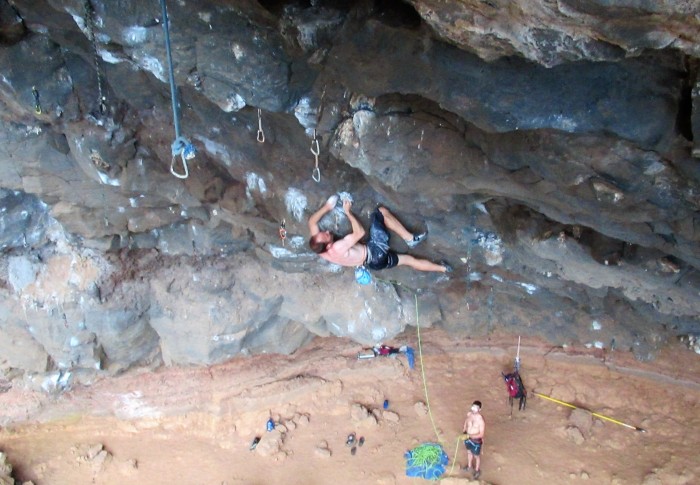 Climbing a stellar 13b in the big cave. Photo Jeff Jackson

Then there was the heat (which is nobody’s fault, not even the Romans). It was just damn hot, apparently unusually hot, even for Maui. And surely humid too. I would guess it was well into the 90s, but with the humidity it seemed by far the hottest conditions I’d ever climbed in. I like to think I’m training myself to be resilient so I can climb through Colorado winters, but really I think I’m just adapting increasingly towards colder temps. Jeff, Dave and Justin (who joined us at the crag) showed me what it’s like to really be tough. I took the initiative and led off the complaints, but the local hard men did their best to coddle my ego by joining in periodically (thanks guys!). If you consider the wind chill on Grand Sentinel, and compare it to the Heat Index in Maui, I suspect I’ve climbed in conditions spanning more than 100 degrees Fahrenheit in the past year!

Dave cruising the 12b, just about to enter the unusual crux.

Once the approach sweat evaporated it was time to climb. I started up an excellent 5.12b, the crag warmup, whose name had something to do with goats. A boulder start led to an easy middle section and a no hands stance below what appeared to be an easy exit pulling around a short roof. Not wanting to appear soft, I pretty much skipped the big rest and charged into the devious finish. I dug deep into my bag of tricks, including clipping mid-crux for extra credit, ultimately resorting to a head jam behind a protruding flake. Higher I chimneyed into the same feature and my back was so thoroughly drenched in sweat that I thought I might Slip-and-Slide right out of it. I appreciated the guys’ letting me climb first, since I’m sure my sweat upped the grade to at least 12c for the followers.

Approaching Crux #1 on the 13b. Photo Jeff Jackson.

After a nice long break to cool down, I jumped on a brilliant 5.13b that climbed out the center of the cave. This was the type of climb that would be a 4-star classic at any crag in the country, even the Arsenal. It was essentially a series of five boulder problems split by rests of varying value. The rock is nearly flawless, and sports some of the most unusual holds I’d ever encountered. The route gets going right off the ground with a burly boulder problem to reach the first bolt and a no-hands shake. In classic Smith Rock-style, the locals have elected to ignore this when considering the route’s difficulty, and instead refer to the next boulder problem as “Crux #1.” This crux comes after a questionable, scrunchy, power-sapping “rest,” and involves a big, committing move to a protruding jug and a tenuous sequence to unwind. “Crux #2” was even harder, with another long move to an incredibly featured hold, before a fun exit of interesting stems on killer rock.

Sticking the long reach in the middle of Crux #1. Photo JJ.

Before we knew it, the sun set and we made the short walk back to the truck. Dave treated us all to a round of fresh-from-the-husk coconut juice, and Justin passed out some delicious fresh lychee fruit. Mercifully, it was pitch-black on the drive home, so I couldn’t see all the road hazards we surely narrowly-missed. Before saying goodbye to my new friends, they graciously shared beta another crag I really wanted to experience, known to the locals simply as “PK.”

The left half of the incredible PK wall.

PK is a totally different experience than the cave we visited, and shows how varied Maui’s basalt can be. The cliff is more columnar and vertical, but it is covered in strange, bulbous mushrooms of protruding stone that climb a bit like tufas. The rock was impeccable and the setting was serene, right on the beach under a canopy of short trees.   The climbing here was much more fingery and less physical—right up my alley.

Warming up on the right end of PK. Some of the bulbous mushroom features can be seen to my left.

Since I was climbing with the family, time was short, but I jumped on a set of excellent routes. Each one was better than the last, with perfect stone and interesting climbing. I quickly learned the mushrooms were all a bit worse than they looked thanks to sloping topsides and generally rough textures, but they were still super fun to climb. 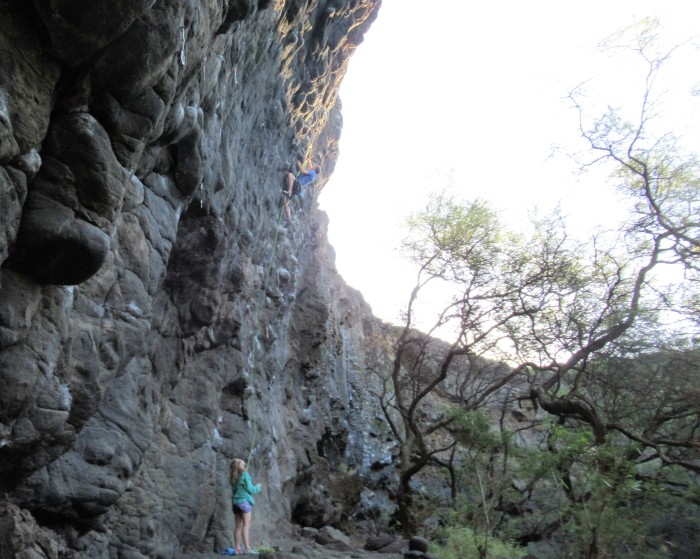 It’s not often I get a truly new experience on rock, so I try to appreciate it when I do. Climbing in Maui was completely unique. I feel like I barely scratched the surface and I look forward to the opportunity to return and explore a bit more.

Thanks to Jeff, Dave and Justin for showing me around and sharing their little slice of paradise with me, I hope to return again soon. Fingers crossed for a Southwest-Airlines-instigated price war!

See you next time!