The small town of Ouray, in southwest Colorado, is one of my family’s favorite places to visit. The town has everything we look for in a vacation spot—good climbing, endless rest-day activities, and a place for the kids to swim. With extra sweeteners like a great bakery, plentiful ice cream, the best scenery in Colorado, and heated pools, it’s the perfect road-trip destination. 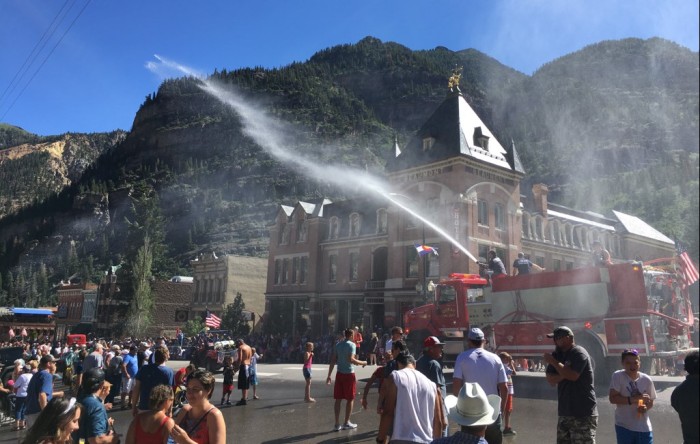 The 4th of July parade in downtown Ouray. If you stand on the sunny side of the street, expect to get soaked!

This year our climbing focused around the aptly-named Pool Wall, an angling cliffband that looms above Ouray’s legendary hot springs pools. The rock appears to be stuck somewhere in the geologic process between sandstone and full-on quartzite (which is metamorphosed sandstone). It looks like the former, but feels and climbs like the latter. The rock quality varies a fair bit depending on the sector, but where its good the rock is quite good.

The Pool Wall. The Bay of Pigs sector is the clean lower wall in the center.

We primarily spent our time at the killer Bay of Pigs sector, which features a number of super-high quality face climbs. The Ouray community seems to have a proclivity towards stiff grades, and this was certainly on display. Some of my favorites were Empire of Dirt (5.10d), which culminates in a classic but no-joke slab crux right below the anchors, and the namesake Bay of Pigs (5.12b) which has excellent rock and weaves up the center of the sector on generally crisp edges (and a few committing slaps).

High on Bay of Pigs.

The highlight of my first day was scraping my way up Matt Samet’s standout route Breaking the Waves (5.13a) on my first try. The crux climbs over a Rifle-esque blocky bulge with powerful underclings that lead to a committing dyno, but the upper headwall is stacked with desperate stabs to thin edges. It’s easily one of the best sport climbs in the Ouray area, and perhaps the best of the grade.

For my next climbing day, I set my sights on an open project on the far left end of the Bay of Pigs sector. According to Jason Nelson’s fantastic book “Climbs of the Million Dollar Highway,” the route was bolted by my friend Luke Childers but never sent, and features a “small, sharp pocket” at the crux. When I stumble on opportunities like this, I’m both intrigued and apprehensive—I would love to contribute a first ascent to an area I enjoy so much, but I also don’t want to “waste” a few precious vacation burns on a route I may not be able to finish. 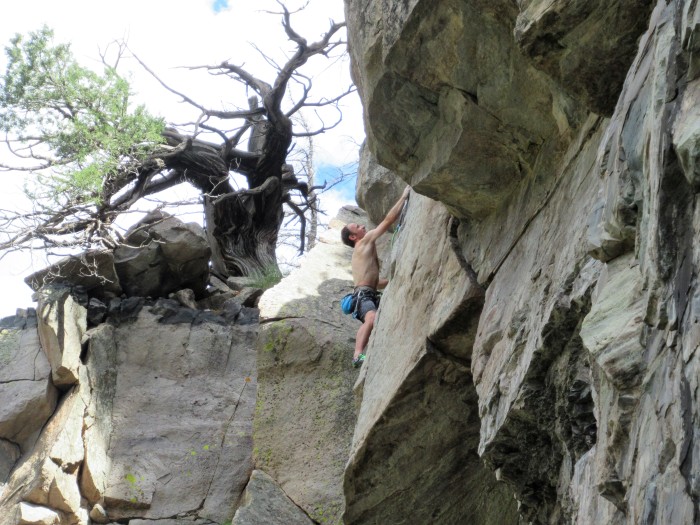 Pulling onto the headwall on the “open project.”

With a few good sends in the bag I figured it was worth the risk, especially considering how good the route looked from below. After an easy approach, the route climbs a slightly overhanging arête with well-spaced, rounded edges. The rock was a bit “muddy” from neglect, but with a light brushing, it cleaned up really well.

The business is a 12-foot bouldery stretch along the prow. In the middle of this section is a slightly incut mono pocket that angles to the left, creating essentially a PIP-joint-deep sinker sidepull for the right hand. This pocket was actually pretty easy to pull on, but it was also a “Keeper.” Meaning, if you fall with your finger in that pocket, you better yank it free before your weight comes onto it or else that pocket is going to “keep” your finger!

Yarding off the keeper mono.

The opening boulder begins with a big incut edge, but then nothing for the next 4 feet except an out-of-view, sloping 2-finger dish. Right off the bat I struggled to get off the ledge and established onto the prow. It’s really important to be patient in situations like this. When you know a route has been climbed, and you know the approximate grade, even if you can’t figure out how to do a move, at least you know the move goes (and should be within a certain range of difficulty, or else you’re “doing it wrong”). With a first ascent, you really have no idea. Maybe it’s been left undone because the move is V14? 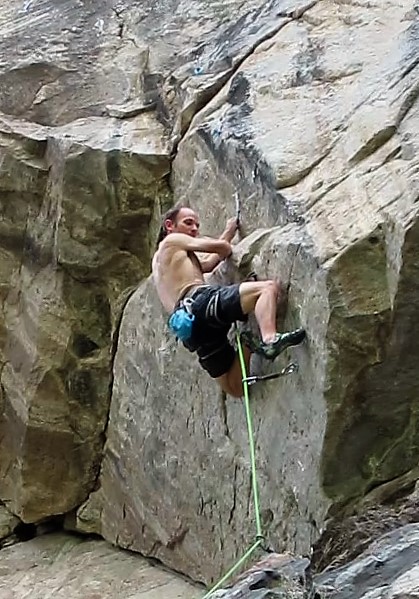 Pulling past the sloping dish on the lower arête.

Fortunately having gone through this countless times gave me just enough confidence to keep at it until I figured out the right footwork to snag the dish. The upper boulder, yarding off the mono thread, is probably a bit more physical (certainly more finger-strength intensive), but much more straightforward to figure out. After sussing the final panel I gave the route a final brushing and rested for a redpoint attempt.

I climbed quickly to the ledge below the prow, bouldered up a couple moves to clip, and down-climbed to rest and chalk one last time. I powered easily up to the big edge, moved my feet onto the prow, and slapped for the 2-finger dish. I came up empty-handed, but got enough friction from my grating right hand to stop my descent before I sagged onto the rope. Try again: same result, still managing to arrest my fall with a hard left arm lock-off. I took a deep breath, leaned back to get a better view of the target, and tried one last time. This time I got just enough of the dish and bounced my fingers in. I made a quick slap to a rounded edge, snagged the mono thread and gingerly clipped.

The next crux is moving off the clipping stance with a huuuge reach off the mono. Fortunately due to its orientation I could lock it off below hip-level. My Mundakas did their job and I snagged the distant edge with minimal drama and all fingers intact. After a brief shake I snaked up the brilliant 5.11 headwall (well, 5.10 by Ouray standards, haha) and clipped the chains.

Unwinding from the big mono reach.

People often ask something to the effect of “The places I climb don’t have pockets, do I still have to train pockets?” Obviously, we don’t have to do anything in the context of training, but I try to encourage people to train a wide variety of grips and this route is a perfect example of the reason. If you aren’t training comprehensively then you are training weaknesses into your climbing. I haven’t had a goal-specific reason to train pockets for at least 5 years. Had I decided not to train pockets over that time I seriously doubt I would have been able to do that route, and certainly not 2nd go. 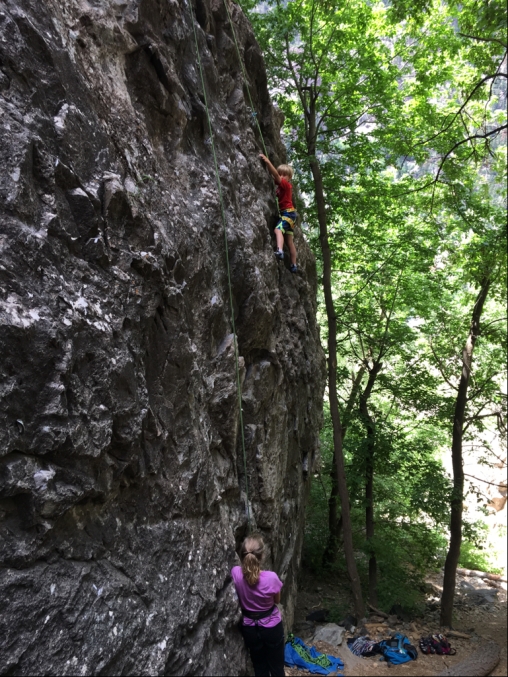 Logan enjoying another of Luke’s routes, California Stars (5.10a) at The Alcove sector of the Pool Wall.

Grade-wise, I always struggle to grade tweaky routes, but comparing it only to the mono-intensive routes I’ve done, I’d say its much harder than Manly Bulges at Shelf or One Love at Sinks, about the same as Todd Skinner’s Smoke Shapes (13d), and maybe a bit easier than Ghettoblaster (13d/14a) in the Frankenjura.

Many thanks to Luke for putting the route in. Luke’s done a tremendous amount of development all around Colorado, including at the Pool Wall, and we enjoyed a number of his routes during our trip. We always have a blast in Ouray and this trip was no exception. I can’t wait for our next opportunity to visit.

The northern San Juan mountains from the summit of Wetterhorn Peak.

One thought on “Corner Pocket”