Editor’s Note: This is Part II in way-too-many-part series on Mark’s trip to Germany.  If you missed Part I you can check it out here.

The next day was our first sight-seeing day, which we spent visiting a trio of so-called “Medieval Villages”. Nördlingen, Dinkelsbühl, and Rothenberg have been fastidiously preserved to maintain the look and feel of a walled city from the middle ages. The narrow, twisting, cobblestone streets are lined with quaint buildings and Gothic churches from as far back as the 1300’s. By dumb luck it so happened that each village seemed more interesting than the last, culminating in Rothenberg’s elaborate fortifications.

Wandering around Dinkelsbuhl, which is “impossibly charming” according to Lonely Planet. We agreed. 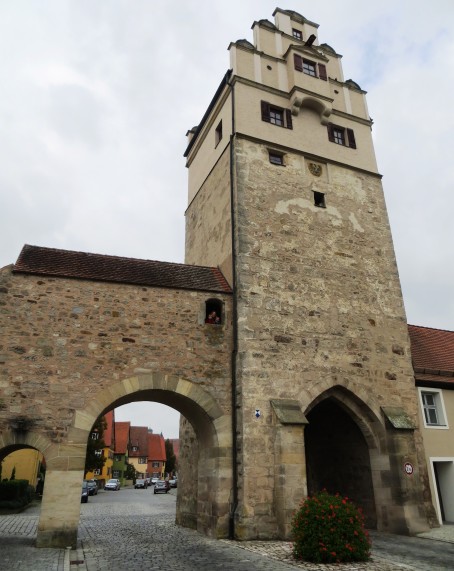 Kate, Logan, and Amelie peeping through the city walls of Dinkelsbuhl (look closely at the window closest to center).

The highlight for Logan was running along the top of the fortress walls. I was looking forward to a taste of the famous “Schneeballen” (snowballs) pastries: strips of dough balled-up, fried, and coated in various frosting or powdered sugar. Structurally these are impressively tough, and so the beta for eating these treats is to smash them up into crumbs inside the bag, and then eat the crumbs. Most shops have a hammer on-hand for this purpose, and Logan was quite keen to help with the smashing (and eating). They looked delicious, but the taste turned out to be fairly bland and dry. I didn’t go back for seconds.

After getting worked on Wallstreet, I had a consolation prize in mind. I was stoked to visit a free-standing limestone tower called Rabenfels (“Raven’s Rock”). My first exposure to the Frankenjura, some 15 years ago, was a 90’s climbing film by Michael Strassman titled “Rock”. The film follows Hans Florine to Arco, Italy in 1994 to defend his World Speed Climbing title. Along the way he visits the Frankenjura, the Dolomites and Elbsandstein climbing areas. One scene shows Austrian Wolfgang Leeb climbing a 5.13b called Westside Story on an otherworldly limestone pinnacle.  Leeb tops out the route, then casually plops down on a hand-made bench on the summit!  I thought the tower looked beautiful, and for some reason I got a real kick out of the bench gag. I really wanted to climb something on Rabenfels (and find out if the bench is still there).

The southeast aspect of Rabenfels.

In 1986, after a winter spent writing the landmark Sportklettern Heute, Wolfgang Gullich left his mark on Rabenfels with his ascent of Ghettoblaster, hailed as the first upper-tenth grade route in Germany, and one of the hardest routes in the world at the time (Gullich had established Punks in the Gym, the first X+ or 5.14a precisely 51 weeks earlier). Ghettoblaster follows a streak of 1-pad deep water pockets up a 6-meter stretch of 25-degree overhanging limestone on the west face of Rabenfels.

Ghettoblaster (with the green rope) climbs the steep west face of Rabenfels.

Ghettoblaster was my back-up plan, but I was more than a little intimidated by it, especially after my experiences over the first two days. According to Gullich’s biography, around the time of its first ascent, prolific Frankenjura route developer Mylan Sykora said that Ghettoblaster “was a route on which no other German climber [besides Gullich] had even the slightest chance.” This was apparently due to the extremely powerful crux, a huge lock-off/deadpoint between a pair of monos. I love pocket climbing, and I love monos, but I’m really not all that good at climbing on them.  That is to say, pocket climbing is not really one of my strengths. I’m much better on crimps and technical sequences than I am with pure pocket power. Sykora’s assessment gnawed at me. Would I have the finger strength to do this move? Maybe the Frankenjura style of climbing was way over my head.

Belayer’s view of Ghettoblaster, which follows the pink fixed draws up the right margin of the gray streak.

We showed up bright and early on Tuesday morning. We were finally adjusted to the European timezone, and we were anxious to get going because we had a long drive planned for the afternoon (for two days of sightseeing in the Bavarian Alps). The tower was big and ominous, but the surrounding landscape was much different from what I pictured in my head. The pillar extended from a steep hill, and the back or north side of it was surrounded by dense forest. The south side was clear-cut some time ago by the industrious and prolific Franconian logging industry, and was now partially re-grown.

We dropped our packs below some moderate-looking lines, and I scrambled around the corner to locate Ghettoblaster. It looked stellar, but much shorter than I imagined. The tower is maybe only 50 feet tall at the west buttress. The first 20 feet was a slab and the last 10 was easy scrambling up the cap rock. This was going to be bouldery for sure! The forest was quite damp, but the route looked completely dry. Unfortunately the cliff base was super muddy and steeply sloping—no place for kids—but higher up, maybe only 30 feet away, I found a covered hiker’s shelter, the perfect playground for the kids. 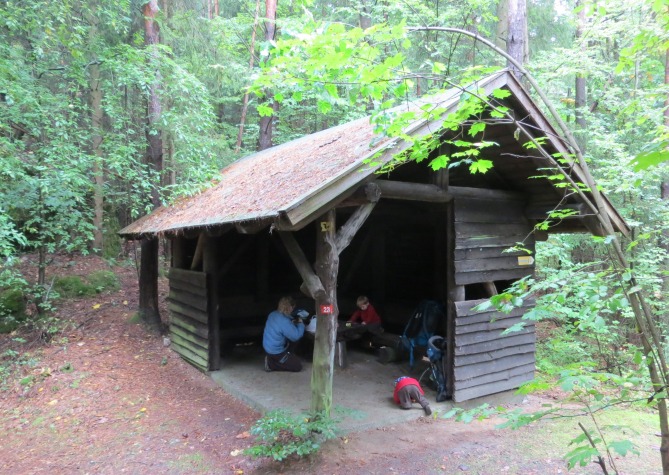 The perfect hang for Logan and Amelie. Amelie (in the red on the lower right) is practicing her favorite pastime: climbing up and down stairs. Logan is mesmerized by the Kindle.

We did a number of outstanding warmups on the south and east faces of the tower, including a 3-star 5.11 named Katalysator and a Kurt Albert 12a called Auerbacher Weg. Both routes consisted of long glorious cranks between sinker pockets. Something about this place was special—all the routes seemed to be fantastic. The rock was much more featured than the other crags we had visited, the position was great, and we had the whole place to ourselves (that turned out to be the norm for our trip). It has a slightly adventurous feel with the looming summit, and it was one of my favorite crags of the trip. 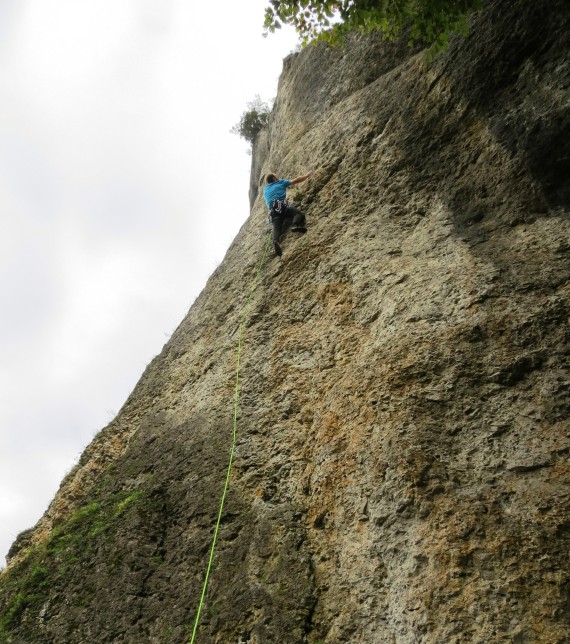 Warming up on the classic Katalysator. Auerbacher Weg is immediately to the right.

Once I was ready we moved the crew around to the northwest side of the tower and I jumped on Ghettoblaster. After a slabby and then somewhat technical start, the difficulties hit abruptly as the wall kicks back. The climbing is in your face, with burly cranks on shallow, sometimes sharp pockets. This was still only my third day on real rock since early July, and it was clear that I wasn’t mentally ready to try hard on sharp, tweaky holds. Perhaps this timid attitude contributed to my earlier shortcomings. I was struggling just to get established on the overhanging panel, and I realized I needed an attitude shift. I needed to get aggro. I gritted my teeth and tried to ignore the pain. I knew I was strong enough to do these moves, I just needed to try harder.

The intense opening moves of Ghettoblaster.

It seemed to work, or maybe I just needed a bit more warmup, but whatever the case, I started going for it more, committing to moves, and as a result my accuracy improved and I was suddenly latching pockets that I previously struggled to reach. I worked out the lower bit and was soon at the crux. The sequence is pretty straightforward. From a good stance at a pair of two-finger pockets, with the third bolt at chest level, you make a big reach right to a good two-finger, stand up, and then place your left middle finger into a deep, but not terribly positive mono. Hike up your feet, grab a shallow intermediate 2-finger with your right hand, hike up your feet again until your hips are about level with your left hand, and then stab at full extension into the high mono pocket, which is also deep but neutral. 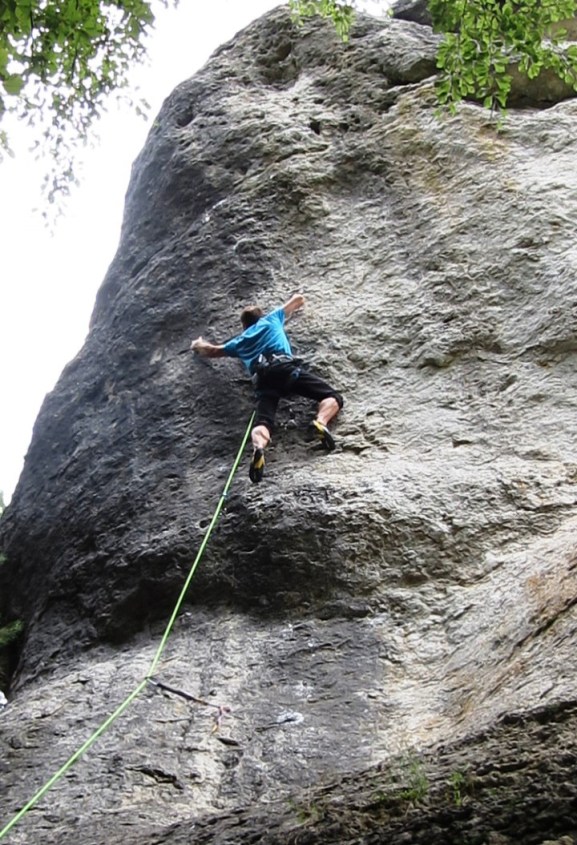 Beginning the crux with a static reach to a left hand mono.

If you stick that move, you shouldn’t fall. After matching your left hand to a shallow two finger pocket, you have to make a desperate slap to a horizontal break, but it’s a good hold. From there, jugs lead to the anchor, just below the cap rock.With the beta sussed, I took a break, watched uselessly while Kate fed the kids lunch, and went through the beta in my mind. There were a lot of tough, low percentage moves just to reach the crux. It was a boulder problem, but it was a fairly continuous one. Honestly, I would be lucky just to reach the crux. 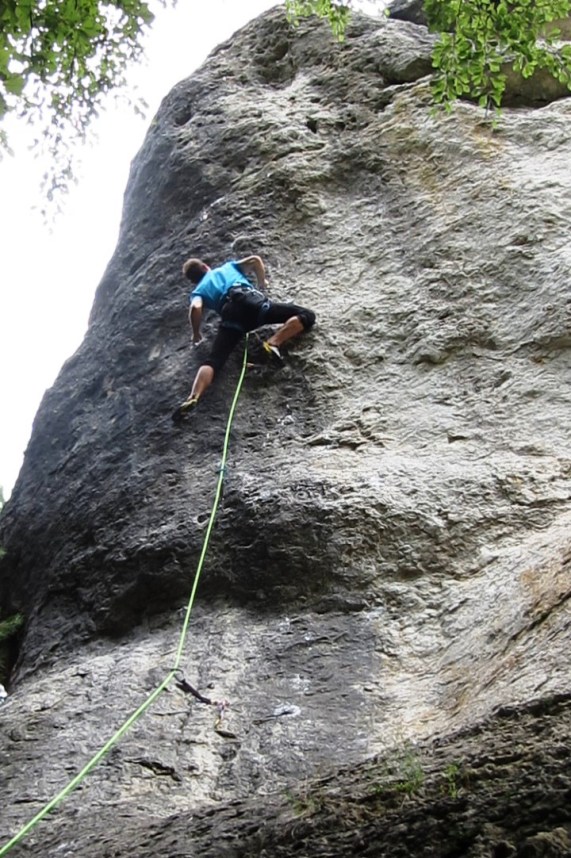 Setup for the crux move.

Eventually it was time to go again. I waltzed up the scoop to a good stance just below the steep wall. I took some deep breaths and summoned my inner rage. With my jaw clenched, I launched up the wall, climbing with controlled fury. It was perfect. I hit every hold just right. My skin was screaming—I felt the pain, but I didn’t let it affect me. I just kept trucking, moving from one bad hold to the next. I couldn’t hang out on these holds, but I could just barely scratch and claw my way past them. I reached the crux, bounced in my left hand, stood up high, and slow-motion stabbed precisely into the pocket. I bounced, matched and slapped to the horizontal break. YES! 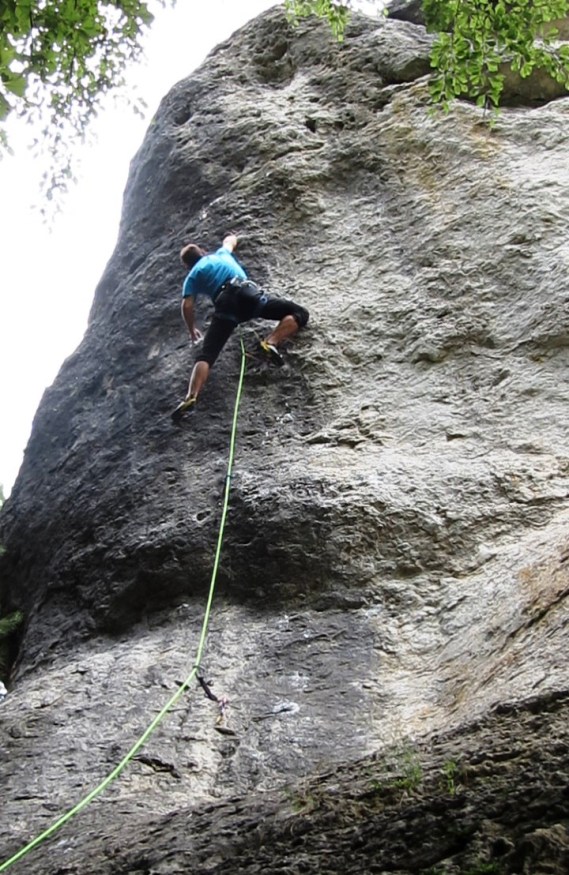 Once I clipped the anchor I continued up onto a vegetated ledge. There’s a 5.8-ish route to the summit of the tower on the north side, but it was soaking wet, so this was my big chance to top out. There’s no gear past the anchor, so I gingerly ran it out up wet holds and bushes. Twenty feet above my last piece of pro I mantled onto the summit. The bench was still there! The backrest was missing, but I took a brief sit and admired the view. It was the perfect place to be.