Editor’s Note: This is Part IV in a way-too-many-part series on Mark’s trip to Germany.  If you missed Parts I thru III you can check them out here:

Over the next five days we climbed at nine different Frankenjura crags, split by a day trip to Munich for THE Oktoberfest and a day of sightseeing in Bamburg. The climbing is now a bit of a blur (Oktoberfest is a bit of a blur too), but there were a few routes that really stood out. 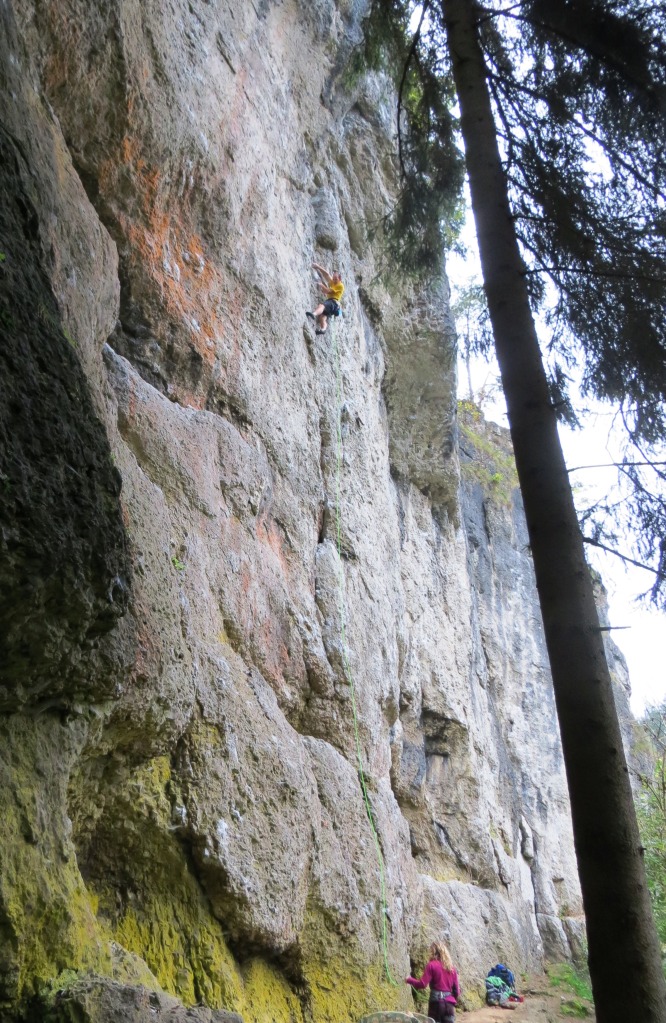 The first day I climbed one of the most famous routes in Germany. Sautanz was first freed by Kurt Albert in 1981, and it was a very futuristic type of climb at the time of the ascent, not to mention the first 5.12c in Germany. The photos of Kurt on the route made it onto the cover of Germany’s climbing mag Boulder, making Kurt and the route instant stars. It’s still the most sought after 5.12 in Germany.

The two-finger pegboard section of Sautanz.

The climbing is right up my alley, just over vertical on shallow pockets and edges. The route begins up a diminishing crack system, gaining a beautiful wall studded with one-pad two-finger pockets. With good footwork the climbing is pretty straightforward most of the way, until a cruxy leftward traverse at two-thirds height, where the holds lose their incut lips. The rock was phenomenal, and the climbing was just as good as the best 12c’s I’ve ever done (Orange Juice at the Red and Heinous Cling at Smith Rock), although not quite as long or proud-looking as either. 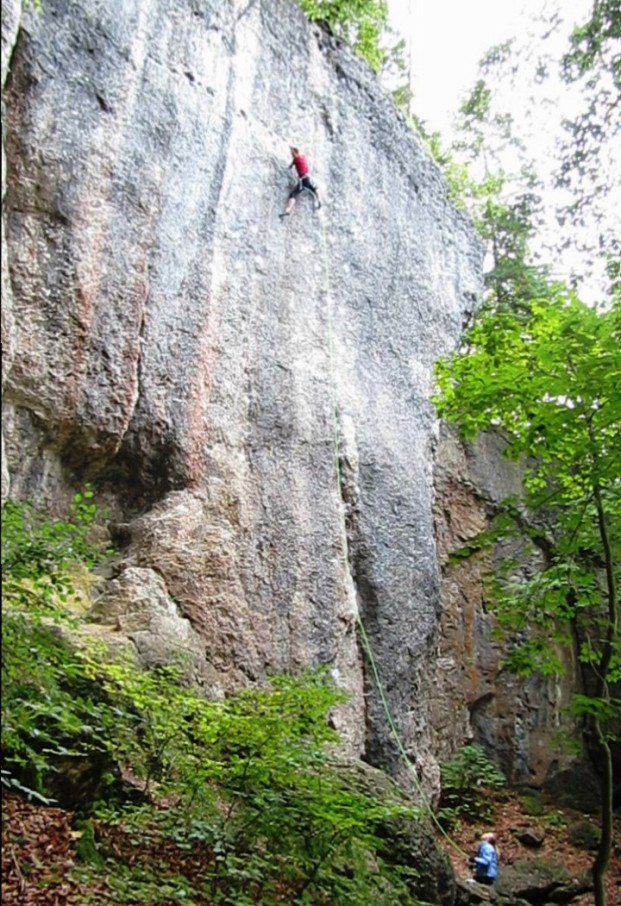 Beginning the crux traverse on Sautanz.

With Sautanz in the bag we packed up and headed a short ways south to the Obertrubach valley. This shallow valley is lined with cliffs and stacked with classic routes. The most famous crag in this area is Eldorado, a 50-foot wide, 15-feet deep roof, slanted dramatically upwards from right to left, giving the appearance of a breaching whale. It has nothing in common with the American Eldorado Canyon (Aka “Eldo”) except that it looks somewhat like the “Roof Routes” area at the lower right end of the Redgarden Wall. There is an awesome playground immediately below the cliff, which includes a mini climbing wall—the perfect place for us! The climbing at Eldorado is short and powerful , and the cliff is known for its bouldery climbs, particularly one line that became the hardest route in the country when it was first climbed. 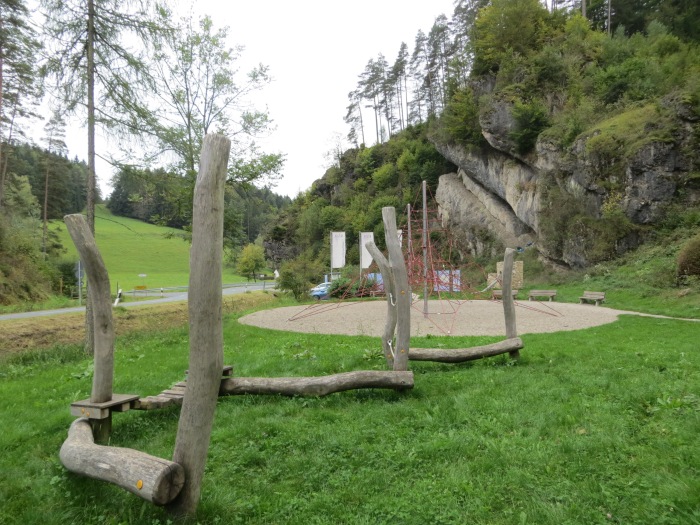 The playground below Eldorado.

In September 1983, Jerry Moffatt visited the Frankenjura for the first time, and wrote a major chapter of German climbing history. He worked through many of the Frankenjura’s hardest lines, climbing Sautanz, Chasin the Trane, and Heisse Finger (perhaps the hardest route in Germany at the time), each on his first try. Out of options, Moffatt visited Eldorado. The cliff had no routes (yet), but German bouldering legend Wolfgang “Flipper” Fietz had bolted a potential line out the center of the slanting roof. (Fietz was a key figure in German climbing, but his contributions have been largely overlooked because he never bothered to redpoint his climbs, instead considering a route finished once he had done all the moves. Later climbers were often credited with the FAs of routes he “opened”, and it’s rumored that Gullich called him the strongest climber he ever knew). Moffatt worked out the moves, and returned a few days later to redpoint Ekel (literally “gross”), the hardest route in the land. 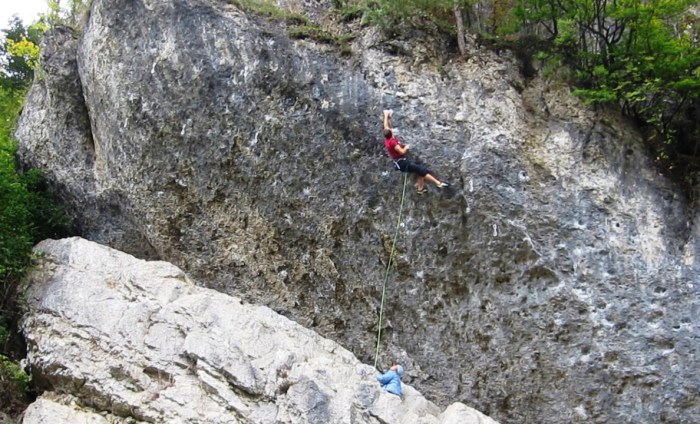 Obviously, I had to try it! The climbing was brutal, on big but sloping jugs. Just reaching the starting holds was desperate and awkward. The route begins with an all or nothing leap to a high scoop, with feet swinging wildly over the abyss. A series of lever moves and slaps works out the overhang to a strenuous snatch to a three-finger pocket. At the lip, one last powerful lock-off from a sinker 2-finger leads to jugs and the anchor.

We finished the day with a few pitches at the nearby Dachlwand (“Roof Wall”). The rock here wasn’t nearly as pocketed, but the climbing was generally super fun thanks to a number of slashing crack systems that provided great jugs. I did a trio of Kurt Albert 5.12c’s, including Goldenes Dach, a classic pump fest on a slightly overhanging wall, and Power of Love, a cruxy number with a huge, committing dyno below a big roof. The side effect of this was that I had Huey Lewis’ song “The Power of Love” stuck in my head for the rest of the trip. 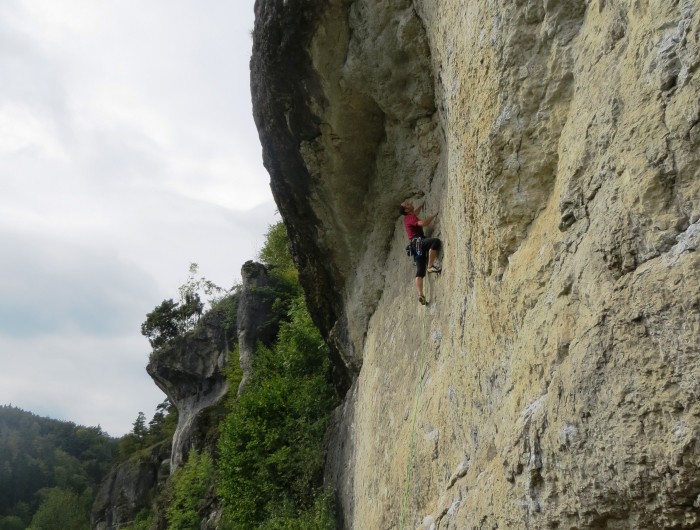 “You don’t need money, don’t take fame. Don’t need no credit card to ride this train. It’s strong and it’s sudden and it’s cruel sometimes, but it might just save your life. That’s the power of love” –Huey Lewis.  Photo Logan Anderson.

After a long day of climbing we headed into the tiny village of Obertrubach to check out the Café Muller and look for Wolfgang Gullich’s final resting place. It was really heartwarming to see all the totems that various climbers from around the globe had left to honor him. 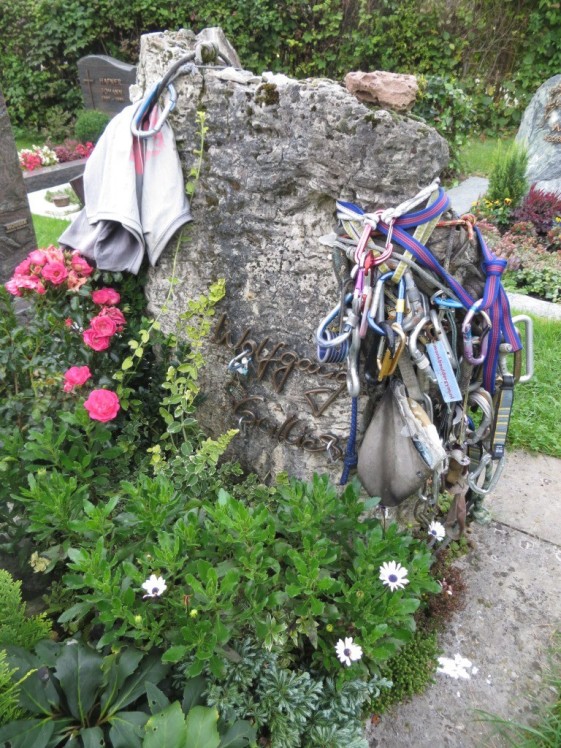 Wolfgang Gullich’s final resting place, behind the church in Obertrubach. It’s pretty remarkable the impact Gullich had on an international level, and that was evident in the tributes that adorned this spot.

The next day we took the train with my sister’s family to Oktoberfest in Munich. Our gracious tour guides, ex pat American and MP admin Shawn Heath and his wife openly mocked our interest in Oktoberfest. Apparently to Germans it’s sort of the equivalent of going to Times Square for New Year ’s Eve or going to Florida for Spring Break or something. It’s a caricature of the Bavarian culture, and packed with surly drunks. But, we had to go anyway! 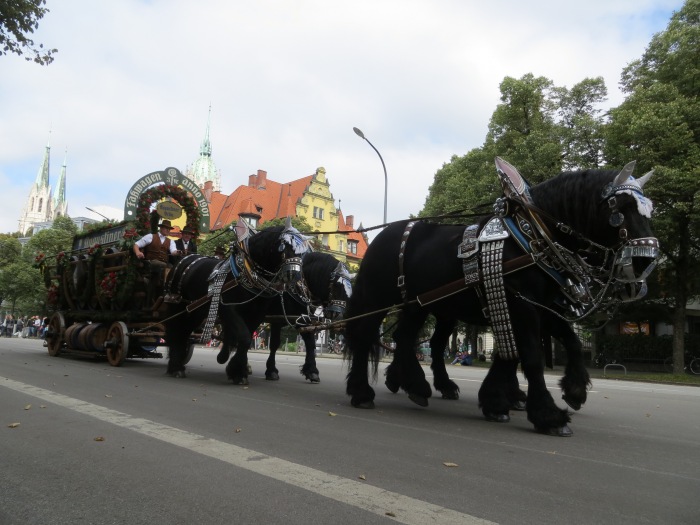 We mitigated the crowds and drunks by going super early (we boarded the train in Weiden at 6:40am). Even then the train was completely packed by the time we arrived, filled with Germans in full Lederhosen and Dirndl costumes. It was pretty cool seeing the locals dressed up, and completely unaffected about it. They weren’t self-conscious at all about their attire, and we actually felt a little like we weren’t appropriately in the spirit of the event. As for surly drunks, not only were people drinking on the train by 8am, there were vendors on board selling beer! But everyone was polite and cheerful and we didn’t have any problems. 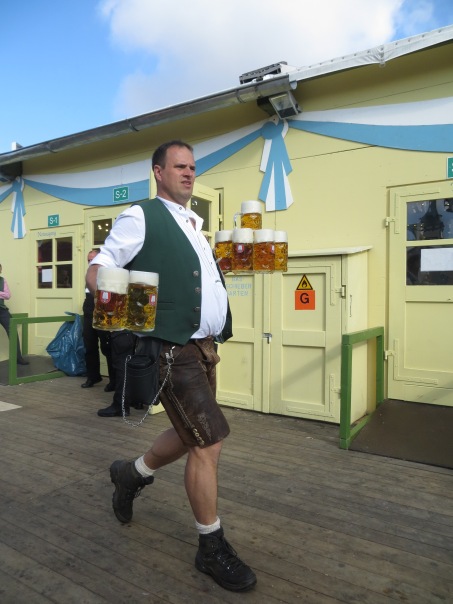 Bavarian waiter carrying a ridiculous amount of beer. Each glass contains a liter, and the empty glass itself is pretty heavy.

Oktoberfest itself was fairly mellow thanks to our early arrival. We all got our obligatory liter of beer, and marveled at the talented servers shuttling massive steins to satiate the countless patrons. Oktoberfest is a festival first and foremost, and they had countless amusement park rides to distract the kids. 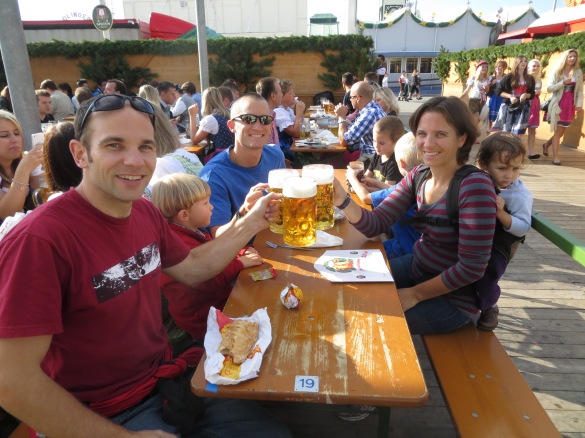 Prost! (that’s German for “Cheers!”) My brother-in-law Eric and my sister Christina with her children.

The next day we went to Streitberger Schild, at the far northwest corner of the Frankenjura, to climb the Adolf Rott Memorial Route, along crack system up the leaning west face of the towering wall. Like many routes in Germany, this was originally an aid climb. In 1975 Kurt Albert freed the route, which at 5.10a was no marvelous feat. However, at that time aid climbers often painted a red circle at the base of the cliff to mark the lines that had been climbed. Albert changed the course of climbing history by filling in the red circle to create a big red dot—the world’s first “redpoint”—and some say the birth of sportclimbing. 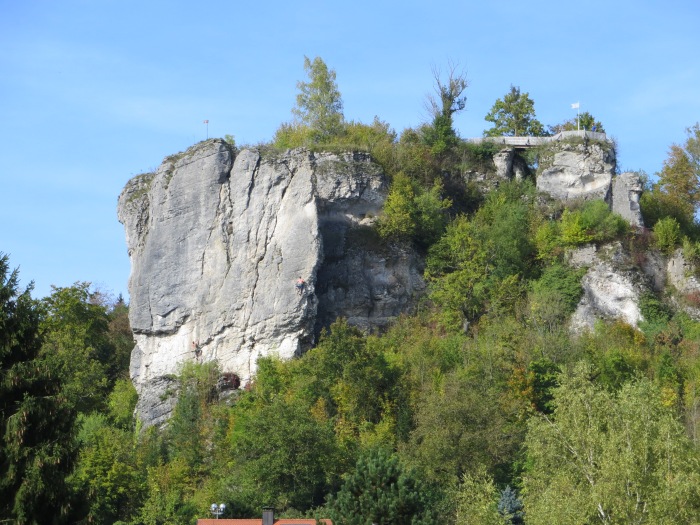 Streitberger Schild, with a couple of climbers heading up some old-school steep slab routes.

Unfortunately, I couldn’t actually find the splotch of paint that made this route famous. The base of the climb is thickly overgrown, and the paint is now almost 40 years old. I risked tick bites and nettles to dig through the vegetation, but I still couldn’t find it. Still, the climbing was stellar, among the most interesting (and steepest) 5.10s I did in Germany. 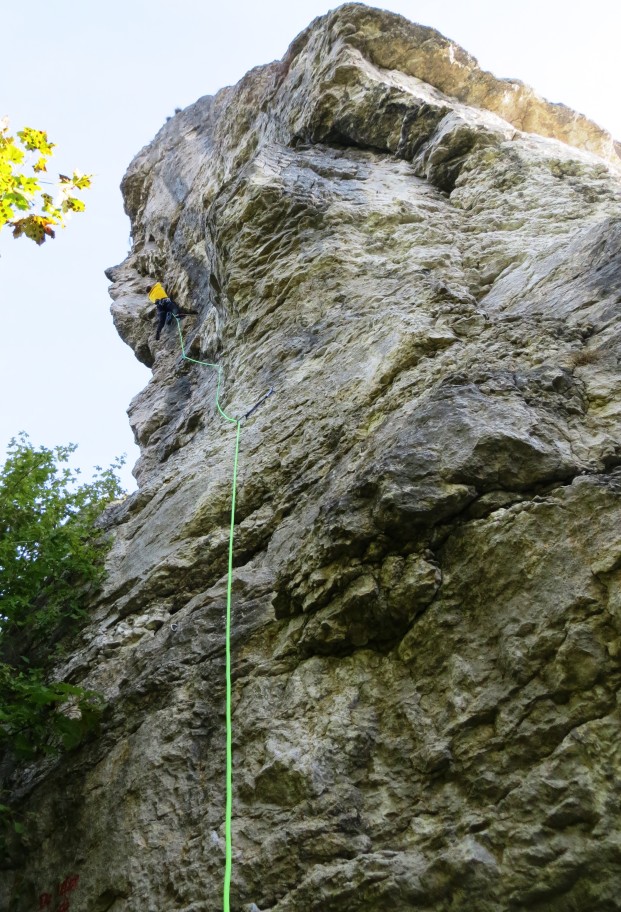 We did a couple more warmups of the slightly terrifying slab variety, and then headed for Luisenwand, an old crag of vintage techno test-pieces from the 1980s. Gullich left his mark here with ascents of several famous climbs, especially Kaum Zeit zum Atmen and Kamasutra 218, among the hardest routes in Germany when first climbed at 5.13c and .13d respectively. 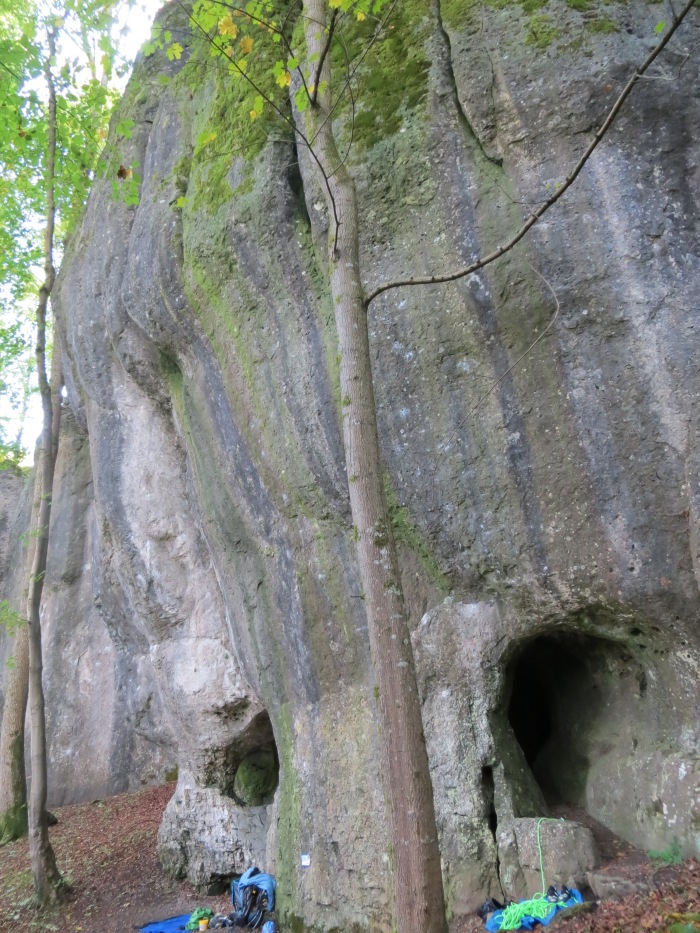 The right half of Luisenwand. Kaum Zeit zum Atmen climbs the short line above the rope on shallow, sharp pockets and edges.

My primary objective was a Gullich 13a called Team Motivation. It’s a technical masterpiece, weaving up a monolithic wall of hard, poorly featured vertical limestone. It’s quite out of character for the Frankenjura (the entire crag is), with few pockets, and generally very shallow ones at that. The climbing was super thin and the footholds were unfortunately quite polished, but I managed to get up it on my first go. 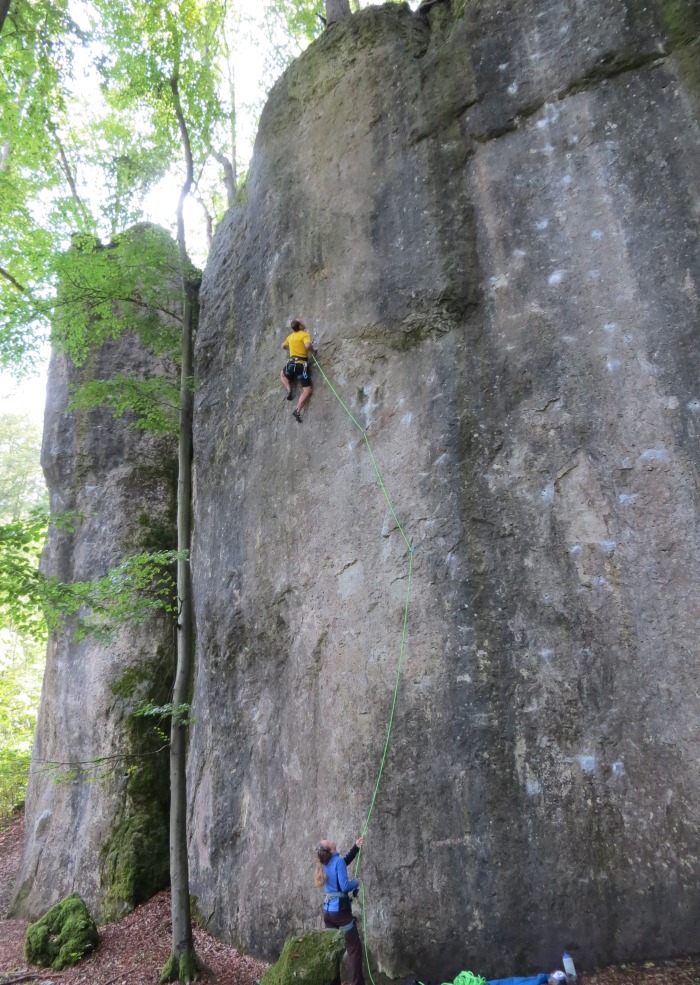 Dealing with some thin, slippery footholds on the crux of Team Motivation. Photo Logan Anderson.

It’s kinda strange—it’s not what anyone would think of as fun climbing. It’s very balancy and insecure, but for some reason I absolutely loved it. It was one of my favorite routes of the trip. I really like that type of climbing, and it seemed to me like the quintessential technical route, where excellent footwork is paramount and trust in your skills is more critical than raw finger strength. It’s as if some said “give me the fewest possible holds that will allow me to send an otherwise featureless wall”. As a tourist, I think it also shows the amazing variety that exists within the Frankenjura. It’s the polar opposite of a route like Ekel, and on our trip we found everything in between as well. 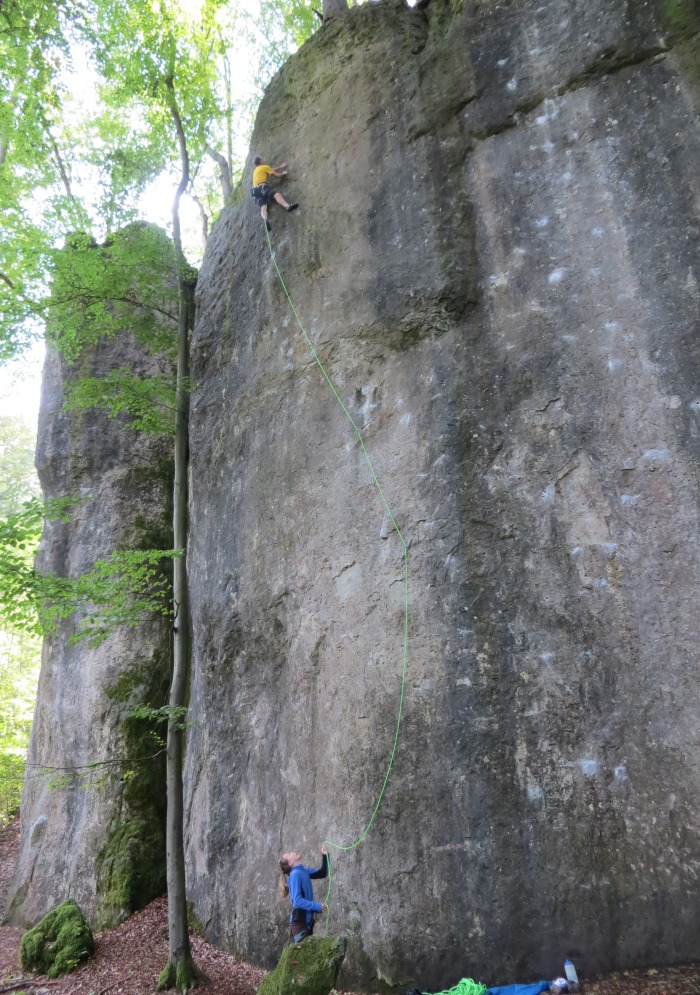 The next climbing day we visited three crags around the picturesque village of Pottenstein. Puttlacher Wand, Barenschlucht and Marientaler Wande were all awesome crags, and every route I climbed I would climb again (which is really saying a lot). The one route that really stood out from that day was a steep arching line called Herkules at the uber-classic Barenschlucht crag. It‘s one of the best 5.13’s I’ve ever climbed. The route consists of unbelievable sinker pockets up a super steep wall. It’s a classic pumpfest, but it requires a little bit of power at the start, a little bit of intelligence to read the sequence at mid-height, and a little bit of footwork to climb the headwall. 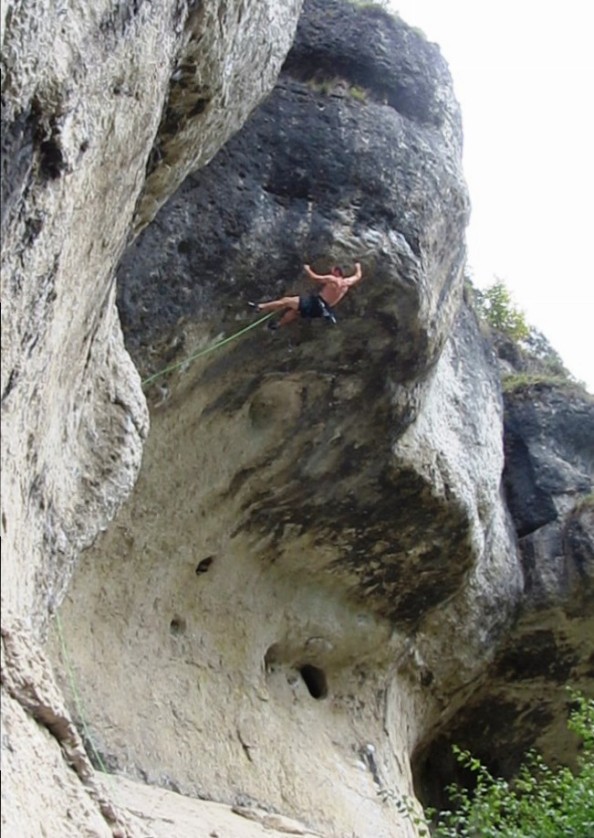 The brilliant Herkules at Barenschlucht.

I got stopped cold by a ridiculous (dare I say “Herculean”) huck move at the third bolt. I tried it several times with no luck. One thing that made onsighting so difficult in the Frankenjura (and on pockets anywhere, really) is that not only must you read the correct hand and foot sequence, but you also have to figure out, on the fly, the best way to grip each hold. Often the holds are extremely convoluted and a different combination of fingers, or pulling in a different direction can make a huge difference. Just as I was about to bail I figured out the proper finger position for the left hand pocket which made all the difference. 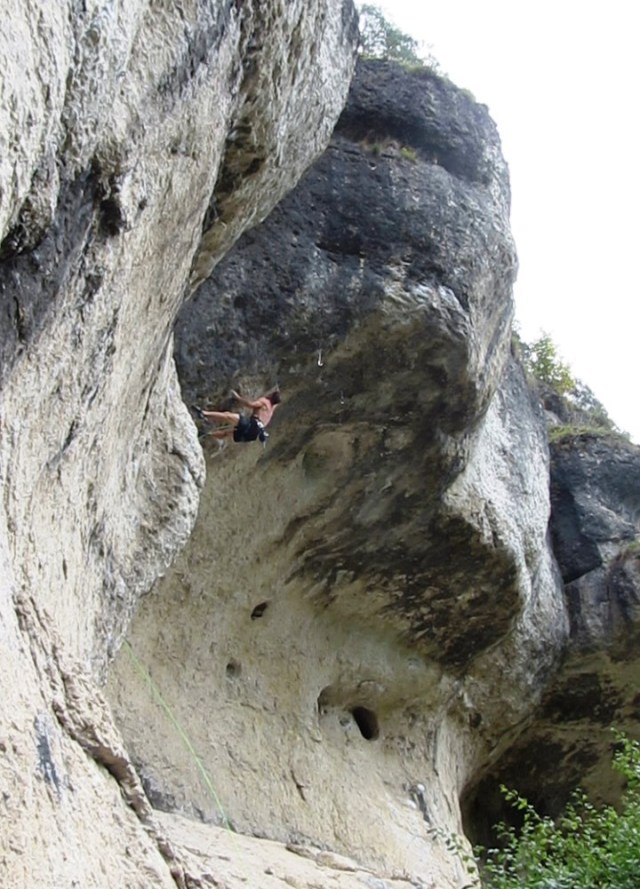 We visited one more crag, a paradise of 5.9 and 5.10 jughauls called Marientaler Wande. After that Kate and Logan did a couple laps on the Pottenstein Alpine Slide and then we headed back to Weiden to pack for the next days’ excursion into the former East Germany…. 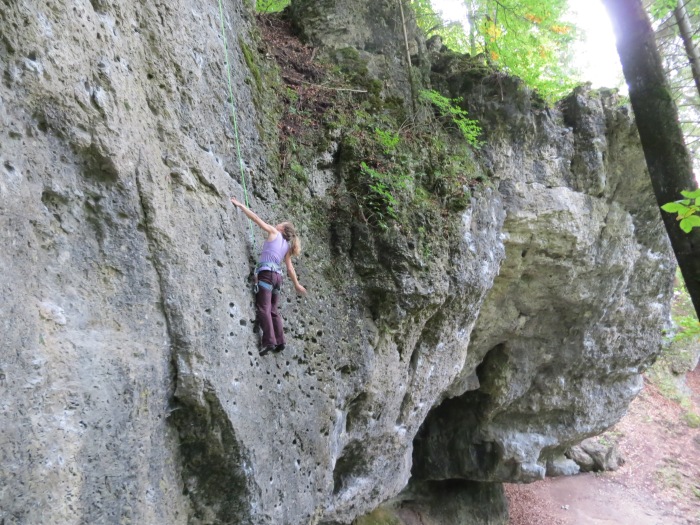 We finished off the day with seven pitches of marvelous 5.10 jughauling at Marientaler Wande.

Check back here soon for the final narrative installment on our Germany trip, Germany Part V: East of Weiden