I’m currently reading Greg Crouch’s fascinating book “Enduring Patagonia”. I’ve always had this thought in the back of my mind that when the kids are grown up I’ll go climb Cerro Torre for “fun”.  After reading Crouch’s book I now realize the folly of that idea.  Crouch spent 68 days trying and failing to climb Cerro Torre’s infamous Compressor Route before he eventually succeeded.  Over the course of those 68 days he attempted the route 14 times!  I’ve pondered that number quite a bit and I’m having trouble truly comprehending it. It’s a credit to Crouch’s determination and perseverance. During my currently-hybernating alpine career, I’ve never tried a route more than twice, and even that was extremely rare.  On Devil’s Thumb we were within a few hundred vertical feet of the summit on our first attempt before the weather completely shut us down, so we bailed and returned to base camp and finished the climb a few days later.  Even considering my time as a sport climber, I can only come up with seven routes that I’ve tried 14 or more times. 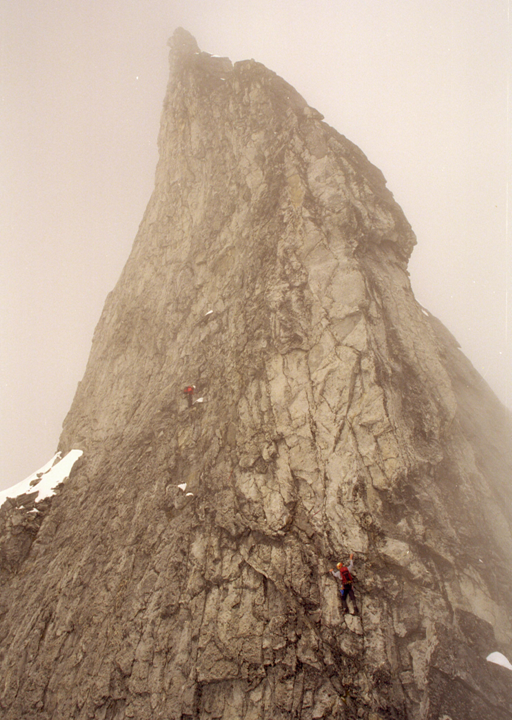 Yet siege-style sport climbing is hardly rare. I know plenty of sport climbers who have spent 100 or more days working a single project.  I have a special admiration for people who can stay devoted to a single pitch of rock for that amount of time.  I don’t think I have the perseverance to do that; I lack the attention span, plus I prefer to bounce around between various crags. But mostly, I prefer to avoid siege-projecting because I believe it’s not an optimal way to improve at climbing.  There’s no doubt that putting in countless days can yield impressive results, far beyond what one might normally achieve, but there is often a significant difference between achievement and improvement.  Mega-projecting can be a great tool to accomplish a goal when used sparingly, like a .13c-or-so climber going all out to climb one 5.14 before he retires. However, if the goal is improvement over the long run, I think a superior use of one’s climbing time is to climb many different routes, on different types of rock.

That’s not to say you shouldn’t reach for the stars.  I do that plenty, but my approach is to try such routes until I reach the point of diminishing returns.  On any project you will eventually reach that point where you know all the moves, you’re falling in the same spot(s) over and over, and you’re just hoping for a miraculous star-alignment to occur to facilitate a send.  At that point you are unlikely to improve much as a climber by continuing on the route.  You may get better at climbing that particular route, but not much better at climbing in general.  On the other hand, if you move on to another route, you will be exposed to an entire pitch of new moves and sequences.  If the new route is at another crag, you may also be exposed to a new type of rock, new warmups, etc.  Focusing on routes that you can send in 5 or less days will get you up 20 times more routes as the guy spending 100 days on the same 80-foot climb.

A good exception to this policy is the climber with a mental block that is preventing physical progression.  If you’re someone who constantly gets close to sending but never quite pulls it off, putting in the time to break through that barrier may pay dividends on future climbs.  For example, if you’ve been stuck at the same grade for many seasons, and you are sending routes of that grade quicker and quicker, but you just can’t manage the next grade, it may be that your mind hasn’t quite accepted the idea that you are capable of climbing harder.  Proving it just once (even through a protracted siege), can allow your head to embrace your new level, and you may find that subsequent projects at the higher grade progress much more quickly. 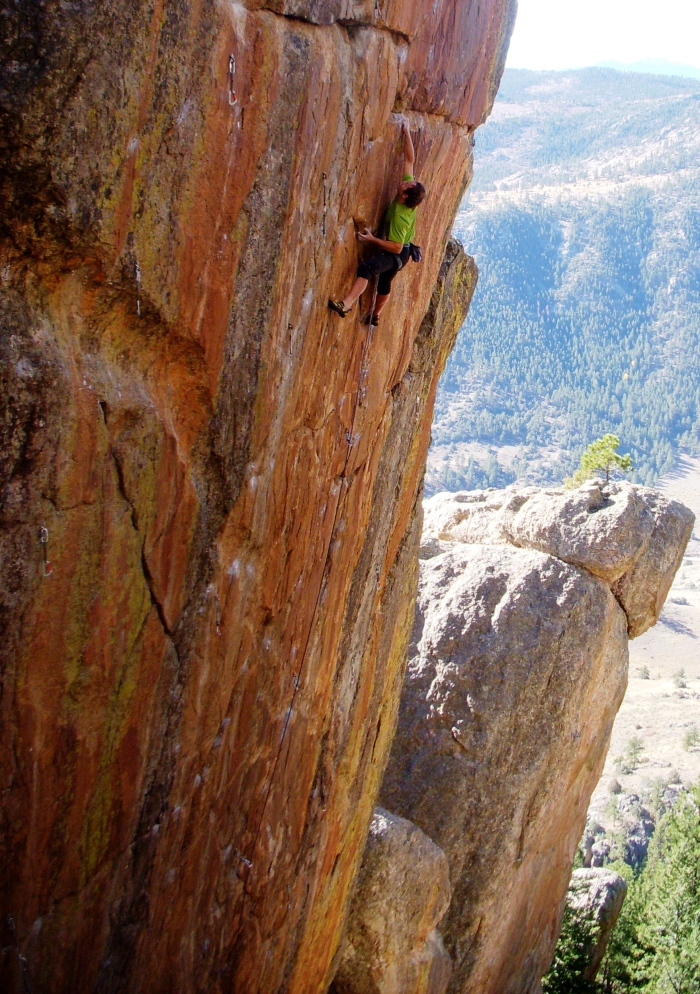 Grand Ol’ Opry turned out to be a protracted-for-me campaign of ~13 total days spread over two seasons. It took longer than I wanted, but it helped me overcome my mental resistance to climbing harder than 5.14a.  Photo Ken Klein.

Generally, if I’m not on the verge of sending a project after 5 days or so, I select another, shorter-term objective, then when the season has run its course I retreat to the gym for more training.  When I feel I’ve improved enough that the objective is within my 5-or-so-day target window, I plan for a block of time to try it again.  Part of this is simply personal preference; I prefer not to spend an entire season at the same crag, doing the same warmups over and over, etc.  But I also think it’s a better approach for improving.  It allows me to keep the ‘send train’ rolling even if my eyes are too big for my stomach, it keeps me moving over more terrain, and it makes my training cycles laser-focused on tangible, motivating goals.  The initial reconnaissance of the route provides extremely valuable information that I can use to tailor the next season’s training to the route.  With these details about the route, I can determine which grip positions to emphasize, particular movement sequences that need practice (which I can incorporate into my bouldering sessions), and how to design a power endurance circuit to suit the route. 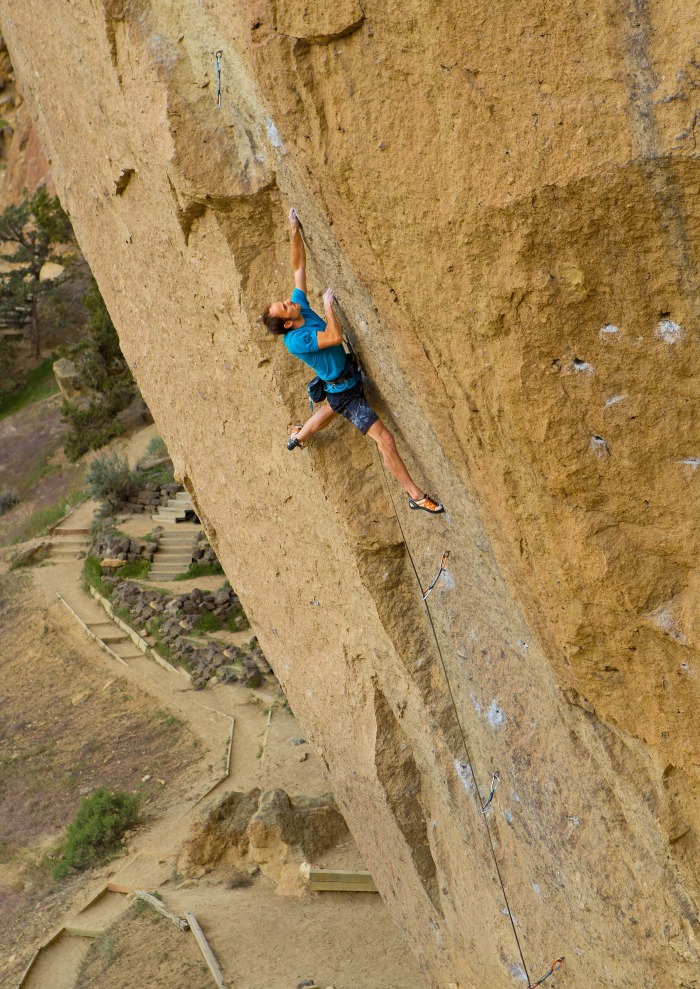 The process of redpointing Scarface, my first 5.14, involved three separate campaigns of 4 or 5 days, spread out over two years. Twice I retreated to the gym for more training, and each time I returned I had improved substantially. I eventually sent after 4 days of work in March 2007. The process never got stale, and by the end of the journey, I had transformed myself into a climber capable of climbing many 5.14s, not just that one 5.14.

Ideally, nearly every day I’m on a project I’m learning new sequences, trying unusual moves, and making steady progress (reducing the number of hang points, or moving my highpoint steadily up the route).  From an improvement perspective, this is the most productive way to project routes.  So how do you know when to go big and when to go home? There is no precise number of days; its a matter of identifying the point of stagnation and making a decision at that time.  With anything in climbing, it gets easier to make that decision with practice.  Generally, you should be able to do all the moves within the first two days (unless a particular move is right off the ground or comes after a great rest, and you have good reason to believe the move will go with another day or two of work).  Once you know all the moves, focus on reducing the number of hangs it takes to get up the route.  Ideally that number will go down by one or more on each subsequent attempt at the route (from 4 hangs to three hangs, and so on), but at the very least try to improve your hang number at least once each climbing day.  If you find yourself repeating the same number of hangs on subsequent days, its time to make a decision.  If you’re falling in the same spots each time, it might make sense to move on to greener pastures.  If you’re falling in different spots, particularly if you’re pushing those points higher and higher up the wall, it might make sense to stick with your project.

This approach should not be allowed to undermine your commitment to your goals.  The idea is not to quit, but rather to re-group, reconsider your approach, and then return when better equipped to succeed.  This cycle of effort only works if you remain committed to the goal during the interim period between attempts. Often you will experience a feeling of loss when you retreat from such a route.  To minimize any “wasted” effort, document your attempts at the route to the extent possible.  Shoot video of the sequences you’ve worked out, create a “beta map”, and take detailed notes on your efforts. Note what worked and what didn’t, what time of year or time of day would be ideal for the next attempt, and how you would train differently in the future to better prepare for the route.  This information, combined with a sound training approach, will optimally prepare you to complete the project in a subsequent season, and there will always be plenty of other routes to send in the mean time.

I first tried Busload of Faith in 2010. I spent 4 days working the route, before bad weather and waning fitness shut down my climbing season. At the time, I felt like I was close to sending and I was disappointed that those 4 days had been “wasted” on a route I didn’t send. When I returned in 2011, I sent the route on my second try of that season! Clearly the time I invested in 2010 was not wasted. In reality, its likely I would have needed more that two additional attempts to send the route in 2010. The time away from the route allowed me to improve significantly, and facilitated a faster send once I was able to get on the route again.