Since the books arrived last Thursday it’s been a non-stop whirlwind of hauling, signing, packaging and shipping books. It’s been frantic, but I kinda like that, and it’s really gratifying to see shipments going out every day and watch the stack of books steadily shrink. If you haven’t gotten your copy yet you can order one here. We’re really excited to hear what people think of the book, so if you’ve received your copy and you’d like to provide some feedback, please do so here. In the calm before the book storm arrived, I managed to do a bit more climbing to cap off what has already been an extremely rewarding climbing season.

Lately it seems like my eyes are generally too big for my forearms; I’m continually selecting objectives that turn out to be harder than I expect, and take longer to send than I’d hoped. More often than not I have to extend the length of my seasons to send my projects, if I send at all. This season has been a nice exception from that trend! I was prepared to spend the entire season on Mission Impossible, but instead I sent on my third outdoor day. That left me with ample ‘fitness capital’ to expend on my endless list of potential objectives.

There’s a great rest about 50-feet up Mission Impossible, and each burn I would spend 5-10 minutes at this perch trying to de-pump and regain feeling in my fingertips. Just left of this rest is an enormous, 10-foot horizontal roof. Above the roof, a 20-foot-wide swath of stone runs up between the parallel cracks of .30-06 (“Thirty-aught-Six”) and Roadrunner. Darren Mabe first freed this intimidating roof by starting up the left crack, tackling the roof directly, and then traversing above the lip of the roof to finish up the right crack. While shaking out, my eyes often wandered to the beautiful burnt-orange wall between the cracks. This gently overhanging panel of virgin stone looked magnificent, but it was difficult to tell from that viewpoint if it had enough holds to go free. I hoped that it would, and I wanted to be the person to free it. After Mission Impossible was in the bag, investigating this wall was my next priority.

I rigged a toprope for a recon mission. The wall was beautiful, and it looked like it would go. On my first run up the wall there were three sections I failed to unlock. The first two had ample holds (albeit small holds), and I was confident I could work out a solution once the bolts were in. The third section was more troubling.

The wall steadily steepens as you ascend, and the climbing becomes desperate just below the top of the wall. At this point the wall itself is essentially blank, except for a left-angling water groove. As the holds trend left, you are eventually forced within a few feet of .30-06. There were useable features in the water groove, but I couldn’t figure out any way to link them without bailing left into the bomber hand jams of the crack. Doing so would eliminate the upper half of the redpoint crux, but it would also mean abandoning my goal of climbing the wall between the cracks. I was a bit bummed after this initial recon. 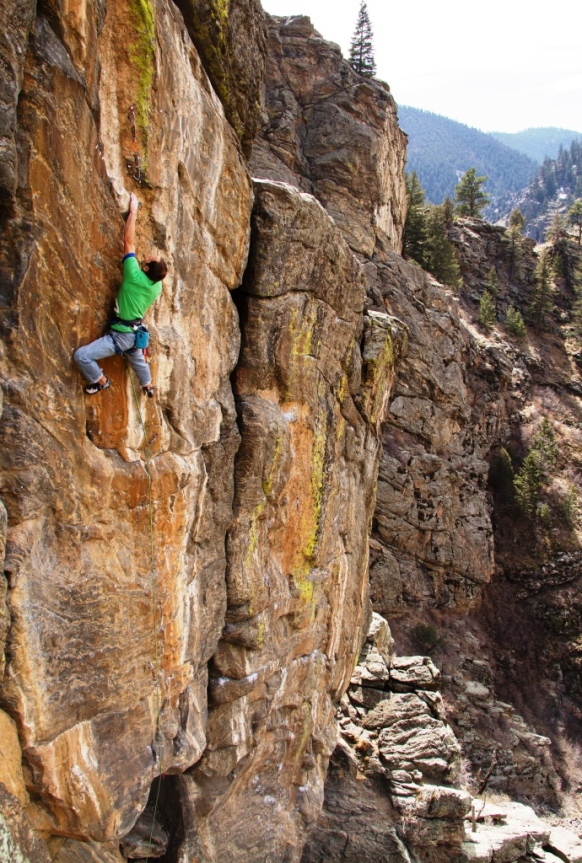 At the ‘Bread Loaf’, entering the vertical water groove.

I came down for a rest, and then decided to give it another look. This time I was able to find a solution that avoided bailing into the crack—by stabbing my right toe into the scoop over my head I was able to slap into an improbable lieback along the left lip of the groove. This beta brought my hips even closer to the crack, but at least it provided a way to climb the wall without using the crack. I realize not everyone will accept this–I suspect many climbers will use the crack, or dismiss the route entirely for this reason—but I’m ok with that. I was inspired to climb the wall and I wouldn’t have been satisfied with an ascent that used the crack.

I still had two sections to work out, but I was certain these sections would go, so I lowered to the ground and raced around to the top of the cliff to install the first batch of lead bolts. A few days later I got the rest of the bolts installed, and then I was back the following day with my friends Jon and Adam to work out the rest of the moves. With the advantage of being on lead and a marathon 90-minute belay (thanks Jon!), I was eventually able to work out the rest of the beta.  On the next go I surprised everybody, especially me, by climbing mid-way through the redpoint crux to fall at the second-to-last bolt! I was making great progress between goes.

The hardest moves on the route come just above the roof, negotiating a slightly overhanging wall of thin edges.

After some well-earned rest days I was back with Kate to hopefully put it all together. It’s almost always windy on spring days in Clear Creek, but this day was especially so. On my first burn I felt great but had a hard time staying warm. By the time I reached the redpoint crux my toes were completely numb, and I bobbled the foot stab entering the groove. The next go I made a point to shake out my feet–as well as my hands–at the rest above the roof. The redpoint crux culminates in a precision lunge into a gaston slot. Once the slot is latched, each subsequent move is easier than the last. I expected to fall going for this gaston at least once on redpoint, but when I reached the move I managed to hit the hold just well-enough to stay on. I bounced it in, threw my heel onto the Bread Loaf, and raced through to the top.

I named the line American Mustang (also the name of a documentary film) in keeping with the theme of Darren Mabe’s Wiled Horses. I think those that choose to skip the crack will find difficulties very similar to that of Mission Overdrive.  Either way the wall provides some of the best rock in Clear Creek, fantastic movement, and an unrivaled position several hundred feet above the river.