In 2011, Denver climbing activist, king of psyche and all-around great guy Luke Childers bolted a stunning arête at The Armory, a compact crag at the top of Clear Creek Canyon.  Clear Creek is quickly becoming the epicenter of sport climbing on the Colorado Front Range, largely thanks to guys like Luke who have a knack for finding great new lines on supposedly tapped out cliffs.  After finishing off American Mustang at the end of March, I had a few more climbing days to spare before beginning my summer training cycle.  I was really psyched to check out Luke’s Armory arête, which looked to me like the best unclimbed line in Clear Creek . I was stoked when Luke generously encouraged me to have at it.

Luke’s project at The Armory. The start of Ken T’ank is visible to the left of the wide white streak.

The line overhangs in both planes, creating a steep prow that juts out towards the raging river.  Its located immediately right of the ultra-classic Ken T’ank, sharing the same flawless rock that makes Ken T’ank among the top three 5.12’s in the canyon.  The route begins by traversing along an undercling flake to gain the business on the arête proper (Jason Baker created the “Fully Automatic” linkup in 2012 by starting up this flake and finishing up the 5.11 “Semie-Automatic” dihedral to the right of the arête) .

This view of the arête from the right gives an idea of its steepness.

My friend Adam Sanders was psyched to check out some potential goal-routes at the nearby Primo Wall, so we headed out one fine Sunday afternoon at the end of March to check things out.  On my first attempt I was completely shut down by the perplexing “12d” start.  The climbing here requires an unusual combination of burl and finesse.  You need to undercling along the flake, while pasting your feet on a featureless, water-polished, overhanging skirt of rock that slopes away in the wrong direction.

However, the upper arête was outstanding!  The climbing was technical, sequential, crimpy and dynamic, everything I enjoy in a route.  I consider myself an arête connoisseur, having “grown up” at the arête capital of North America (if not the world?), Smith Rock. The crux features some ultra-classic arête climbing, utilizing both sides of the arête, hooking, flagging and slaps.  I was able to suss a sequence pretty quickly, but I could tell it was low-percentage, with a big, desparate huck capping off several strenuous moves.  That’s my Achilles Heel, and I figured it would probably take some time to put together. 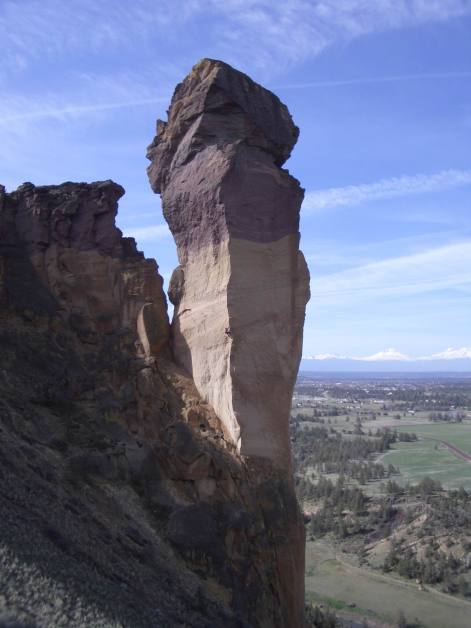 Above the crux dyno, another balancy boulder problem leads to a good shake about 10-feet below the summit.  The final boulder climbs a series of insecure slopers, but is not too bad once you figure out the right sequence.

After my turn at the belay, I went back to solve the starting puzzle.  It can be pretty demoralizing to struggle with a section you expect to come easily, especially when you know even-harder climbing is looming above.  Eventually I figured out the right body English to link this stretch, and after a few days it almost started to feel easy, but the footholds are all precarious and tenuous, and I continued to pop off this section at random, frustrating times throughout the campaign.

With all the individual sections worked out, it was time to start linking.  On the third day I sent to the crux throw for the first time.  I was stoked—now I knew I could send this thing! This move is done with your left hand on a 1-pad deep, incut edge, and the span your right hand makes is about the same as doing 1-5 on the campus board.  I spent some time rehearsing the setup and the dyno until I had all the subtleties worked out.  As I set off for my standard run to the chains at the end of the burn, I placed my foot on the left hand incut edge and disaster struck—I broke the hold, the key hold of the route.

The crux throw. My left hand is on the critical hold.

On my way back down I inspected the damage.  There was still an edge there, but now it was only half-pad deep and sloping.  There was still enough to use, but I would no longer be able to pull out on the hold.  My original sequence wouldn’t work; I would have to work out an alternative.  After evaluating my options, I came up with a viable sequence.  With my new beta the dyno was actually not any harder, but the downside was that now the setup was much more difficult.  Still, I could do the moves, so I had every reason to believe it would go…eventually.

As fate would have it, the next day was April 3rd—the day the Rock Climber’s Training Manual arrived in Denver.  I spent 10 hours that day moving pallets, loading twenty  45-lb boxes into and out of my car, signing books, stuffing and labeling packages.  I was pretty well destroyed.  I don’t know how climbers with physical jobs manage.  I tried the route again the next day, but I was worked and my performance felt flat.

By the weekend I had all the pre-orders in the mail, so I could take a solid rest day before one final day on the route.  I have a goal for the summer season that is extremely important to me, so I figured I needed to end my spring season by the end of the first weekend of April in order to be in shape at the right time for my summer project. 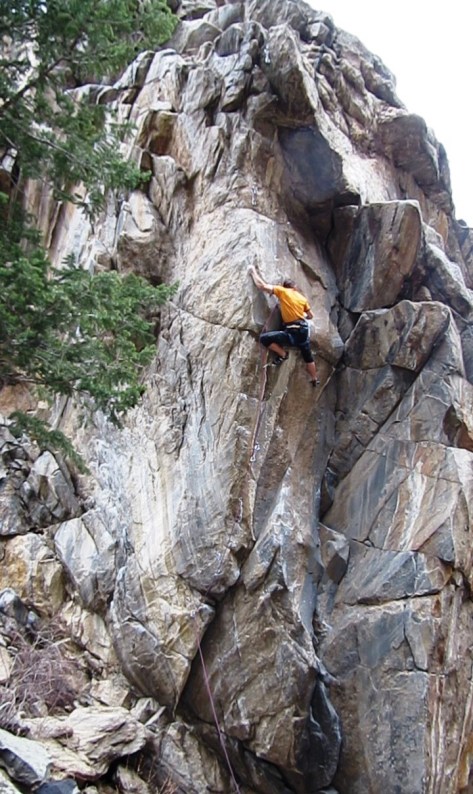 Just above the crux.

I gave the arête two more solid attempts, but each time I fell on the setup move.  I had now fallen there four straight goes.  I decided to wrap up my spring season and start training for summer.  That’s not an easy thing to do.  When you feel victory is close you want to keep going.   Its common for me to think I’m closer to success than I actually am, and I’m often tempted to just keeping flogging my project until the stars align.  I’m sure had I done that, I would have sent the route at some point in April.  However, I figured even once I stuck the setup move, I would probably fall on the dyno itself a few times as well, so I probably wasn’t really all that close to sending, and I was not willing to sacrifice the next season’s goals for a near-term mirage.  Plus, I figured if I quit now and compressed my training schedule slightly, I could get a few days on this route before the conditions were right for my primary summer goal….

After six agonizing weeks, I was finally back at The Armory.  The weather had changed dramatically—snow was falling during my final attempt in April, but now temps were in the high 70’s.  Each cold training day during my six-week hiatus, I would stare out the window and wonder if I should be taking advantage of the good conditions.  Training can definitely be a sacrifice in that sense, but its an invenstment that can set you up for huge returns in the future.  My first burn on the route was a struggle, and I was unable to do the setup move.  This was my first day on rock in six weeks though, and such days are usually a trial, followed by massive leaps in progress.  On the next go, I stuck the setup move, on redpoint, for the first time!  Of course, as I predicted, I fell on the dyno (stupid self-fulfilling prophesy 🙂 ).   I was finally back to where I was before I broke the crux hold, and I could tell the send was close at hand.

Nearing the top of the arête.

I still had some training to do, so I took a few days away from the project.  On my next day on the route I stuck the setup move on both attempts.  Now I was discovering the difference between doing the dyno fresh, off the dog, and doing it from the ground.  When I was dogging, I had the strength to lean my head out and locate the target hold before the throw.  Not so on redpoint.  I had to learn to ‘fly by my instruments’.  I practiced the move a silly amount, and eventually got a link from so low I might as well have started from the ground!

After a rest day, I returned with Kate to try again.  If I didn’t send today I would have to make a choice to postpone this route, or my summer project.  ‘One in the hand is worth two in the bush’ and everything, but still, I really wanted to send today.  I got everything ready and stepped off the ground.  And then I fell, on the second stupid slippery move!  I lowered back down, re-chalked, and took some deep breathes.  That’s one way to deal with the nerves.

Again, I set off…  I flowed powerfully from move to move, climbing quickly and confidently to the arête.  After a quick slap and foot shuffle, I was at a precarious shake.  The undercling flake was below, and I had one last chance for a quick chalk and some deep breaths before the crux boulder.  I moved through cautiously, not as fast as usual, careful to place each hand and foot correctly.  Match hands, unwind, high step, flag.  Now I’m setup.  Trust your beta and slap!   ‘’Yaha!” Kate shouts.  For many weeks I’ve wondered what it would feel like to stick that move.  It felt good.  Solid.  But there were still plenty of hard moves to come, so I wasn’t quite relieved.  Some tricky footwork and an off balance slap to a greasy sloper lead to a good shake.  But I don’t need it.  Just chalk each hand and push on.  Big reach, toe in, shift hip and stab your fingers into the crack.  Stand up tall, false grip, high heel hook and reach for the lip.  Chains! 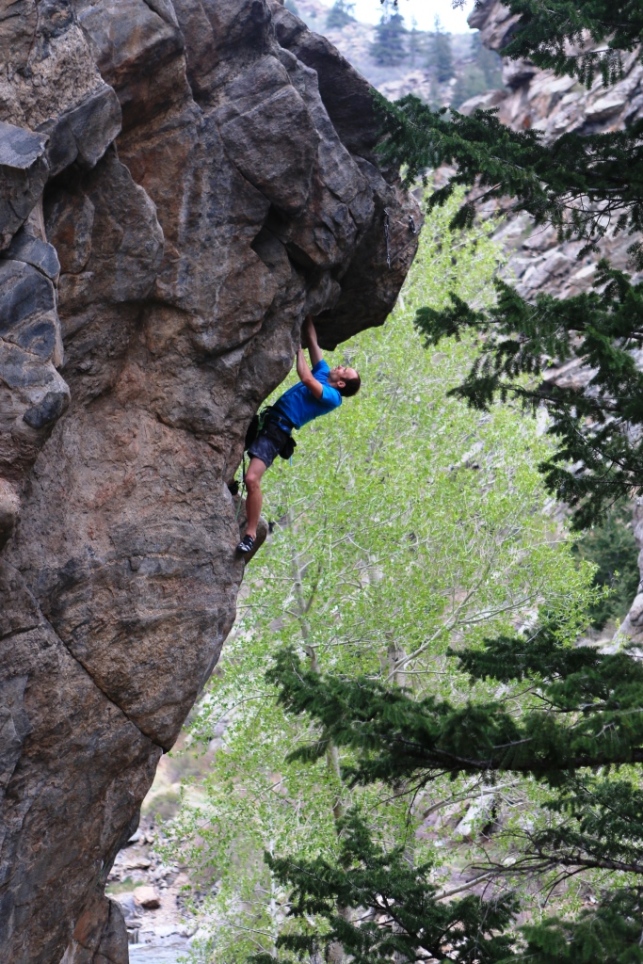 I named the route I Don’t Know What It’s Called, I Just Know The Sound It Makes When It Takes A Man’s Life (aka Beretta), a reference to my favorite comedy Tropic Thunder.  This is my ‘best’ sport climbing first ascent to date, by which I mean it’s the highest quality route I’ve done first.  I think it’s a really awesome route!  The rock is excellent throughout, the movement is stellar, cerebral, and continuous.  There’s no contrivance or unpleasantness. I think it’s one of the top three or four hard routes in Clear Creek Canyon, depending on your tastes.  From head to toe it’s a brilliant route, and one that I feel extremely lucky to have climbed first.  I can’t thank Luke enough for having the vision to unearth this gem, and for the generosity to open it up to the likes of me.

Beretta also happens to be my hardest FA to date, at solid 5.14b.  I’m inclined to say its a hard ‘b’; it took me eight days to send, whereas Mission Impossible, at 14c, took me 10.  Granted, MI is a bit more my style in terms of length and continuity, but they both feature stopper, bouldery cruxes, the sort of thing I usually struggle with.

I wish I could savor this one for a while, but “summer”  is here and I have another project waiting for me….