Pyro, 7b, at Grotta della Strapatente. 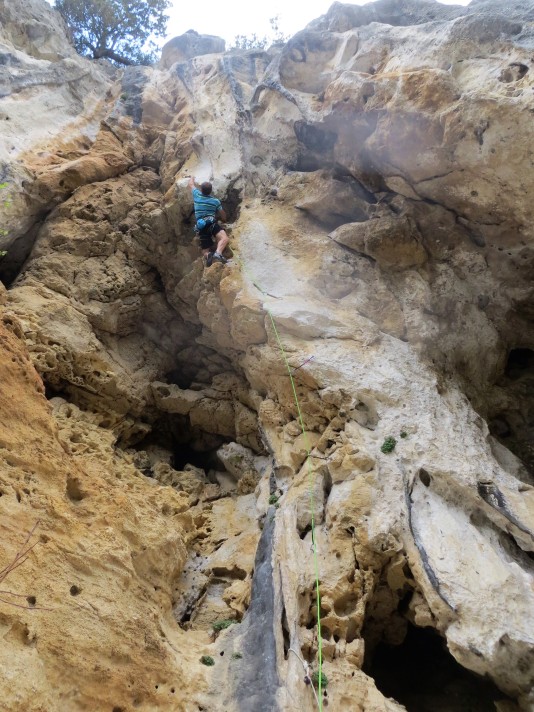 For our last climbing day of the trip, we chose the region around the village of Boragni. This area has a wide selection of crags within a small area, and also seemed to offer some of the best tufa climbing in Finale. It also offered another spelunking adventure for the kids, with two crags connected by a 100m-long cave (fortunately this cave didn’t require any fixed lines or scrambling). 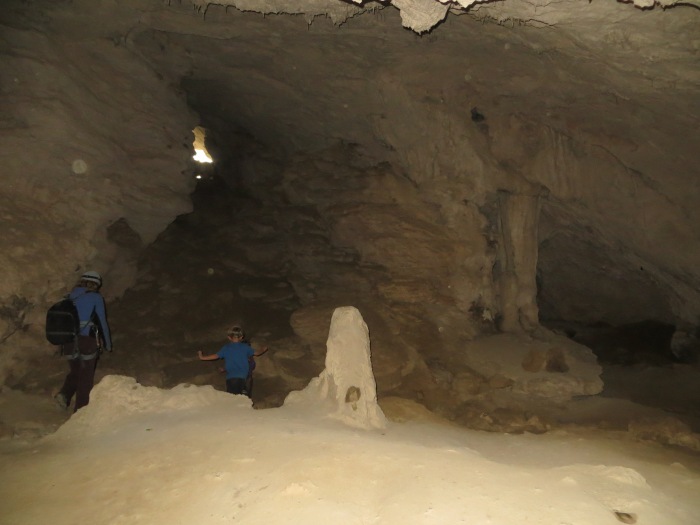 The first crag we visited is called Domus Aurea. This was a small crag with only a few routes, but it has a nice curtain of steep tufas. After warming up, we headed to the phenomenal Grotta della Strapatente. This cliff is famous for an 8b+ (5.14a) called En Attendant Berhault that climbs through a horizontal roof on big stalactites, but we were here for the amazing wall of flowstone to the right. I climbed some truly fantastic tufas on this trip, but these were the most fun. 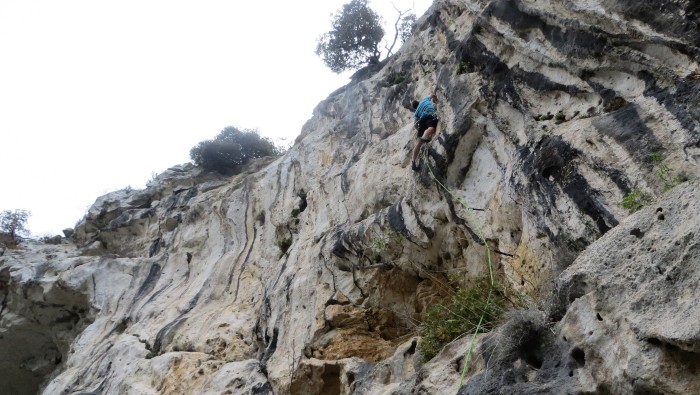 Climbing Pyro, 7b, on the amazing wall of tufas at Grotta della Strapatente.

My favorite route on the wall was a snaking 7b called Pyro. The route flowed seamlessly—just when one tufa ends, an incut pocket appears to link the movement into the next tufa. The route was never super hard, but continuous and sequential. The tufas on this route were incredible—it seemed like each drip was sculpted with a climber’s hand in mind. It was easily the best route I did in Finale.

After a few more of the wall’s stellar tufas, we packed up one more time and headed back down the hill to a stacked cliff of moderates called “Bastinata sinistra Boragni.” The cliff is enormous, with pitches reaching 40m, a few multi-pitch lines, and over 70 routes from 5.8 to 5.12. It was a great hang for kids, with a nice open base, and they both fell fast asleep as soon as we arrived. 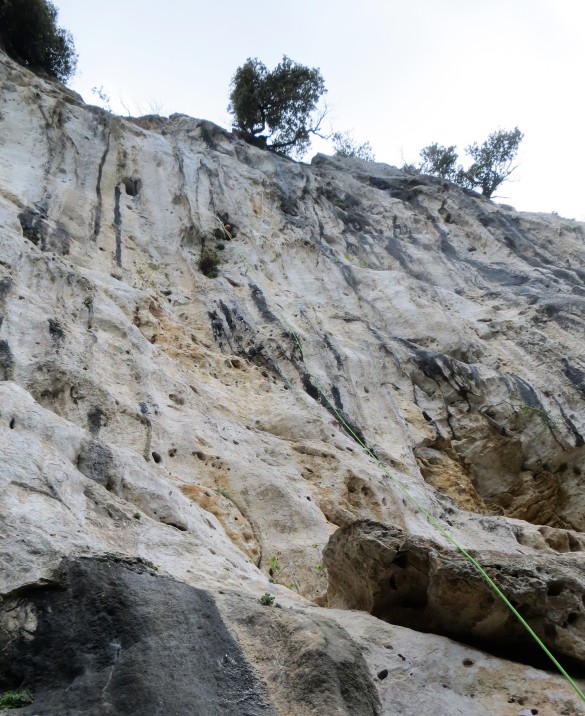 …there he is. Copping a rest in one of the many pockets of Panorama, 7a+

The climbing varied from steep slabs to very-slightly-overhanging walls covered in pockets. Some of these pockets were huge incut jugs, some just looked like that from below. Silt from runoff was problematic on some of the routes, but most of the lines were long and clean. The best route we did was a popular 40m 5.10 called Change the World. I had to scrounge up every draw and sling, back-clean a few bolts, and skip some others, but it was a fun and airy journey.

Kate at the bulging crux of Change the World, 6b, at Bastionata sinistra Boragni.

Of all the places we visited, I find myself most inclined to return to Finale. Not because the climbing was the best—it wasn’t, but because the lifestyle was so relaxing. Minimal driving, a wide variety of routes, and very few crowds. Even when the climbing is bad (it never was), you can look forward to capping off the day with a casual stroll along the beach and enjoying a delicious meal. It would be a great place to live as a retired climber—lifetimes worth of routes to climb, with none of the hassle of other venues. 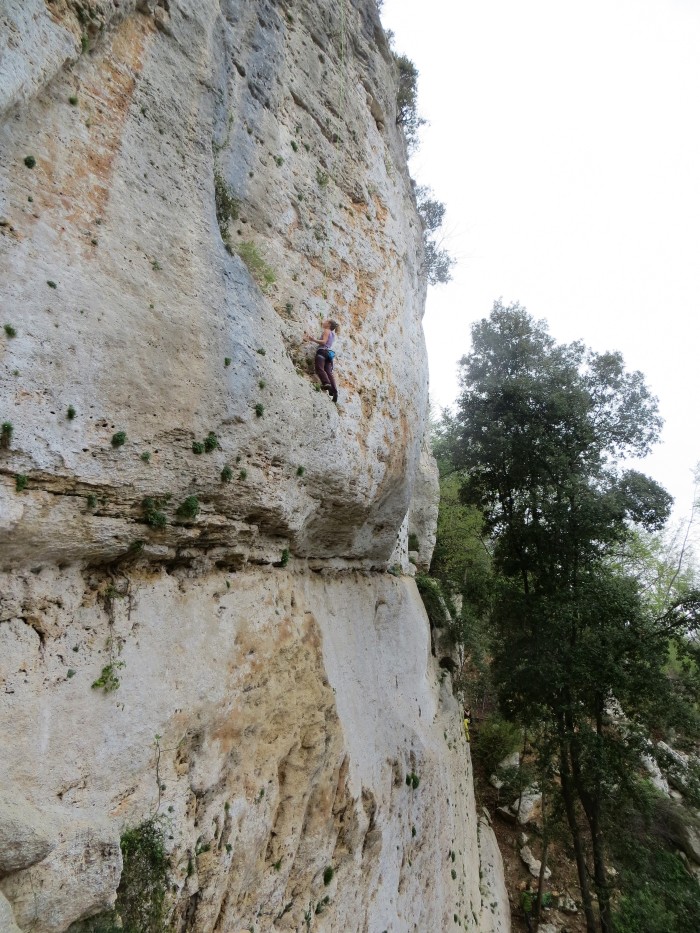 Higher on Change the World’s endless sea of pockets.  The anchor is still out of the frame!

All told, it was an awesome climbing vacation.  We visited a ton of new crags, saw some amazing sights, and had a great time.  Generally we fizzle out at the end of these trips–ending up exhausted and longing for home.  That never happened on this trip.  The kids were really well-behaved the entire time, and relatively self-sufficient.  At 6 and almost-4, it feels like we’re through the tunnel from a “climbing with kids” perspective, and our horizons are broadening once again.  They managed many long days (and long approaches) with few complaints.  Another important improvement over previous trips was that we rented houses in both destinations.  I wasn’t sure how that would pan out, but it worked really well and was surprisingly affordable.  It made everything less stressful and eliminated the problem of finding food outside of normal business hours (the crux of our earliest trips).  The downside of this approach is that it restricts your travel range, but fortunately we found two base camps with a wide variety of incredible sights and crags.  It seemed like we could have stayed forever, and I’d be happy to return to either.

Castle of the Day: Vernazza, along the infamous Cinque Terra trail. We hiked from Monterosso (visible along the shore at center) to Corniglia (8Km total), which Logan managed with no assistance, minimal whining, and just a wee bit of bribery (a Police Boat Lego set).